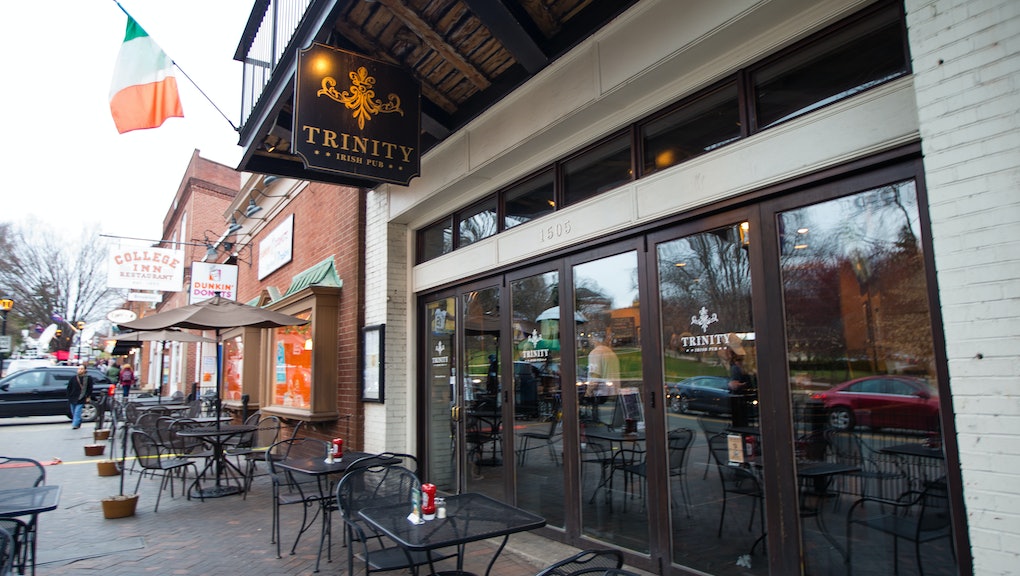 The owner of the bar that turned away University of Virginia junior Martese Johnson the night local Alcoholic Beverage Control agents arrested and reportedly beat him has issued a statement and held a press conference recounting his memories of the incident, many of which contradict the ABC agents' reports.

On Saturday, Kevin Badke, the 35-year-old co-owner and manager of Trinity Irish Pub, explained in his statement and invite-only press conference that he had personally checked "about 30" ID cards at the door that night. When Johnson could not remember the zip code on his Illinois driver's license, Badke said, he determined it was likely "fake" and turned him away, Inside Charlottesville reports.

Badke said he did not check Johnson's birthday or photo because the bar was strictly 21-plus after 10 p.m. for St. Patrick's Day. The New York Daily News reports that Daniel Watkins, Johnson's attorney, said his client was holding a valid Illinois ID issued in 2011.

In the statement issued through an attorney, pub management said Johnson was not acting hostile or belligerent during the short back-and-forth at the door. The statement reads, in part (emphasis added):

In his press conference, Badke emphasized his exchange with Johnson lasted only about 20 seconds, during which Johnson was not "agitated or belligerent," as ABC agents had reported.

"In Mr. Badke's opinion," the statement continued, "Mr. Johnson did not appear to be intoxicated in the least."

After their interaction, Badke went back to working the door and checking IDs; a few moments later, he said, he turned towards a loud commotion and saw Johnson on the ground, lying face-down with an ABC agent's knee on his back.

It's still unclear what transpired between Badke turning Johnson away and the sidewalk arrest.

Badke noted that the agents had been near the pub for most of the evening, watching him and the other bouncers check IDs, though none of the agents entered the bar at any point during the evening. Badke could not speculate as to why the ABC agents singled out Johnson and pulled him aside. Virginia state police are currently conducting an investigation to determine what transpired and whether the ABC agents used excessive force.

As Inside Charlottesville notes, the Virginia ABC has a track record of poorly handling suspected underaged drinking. In April 2013, UVA student Elizabeth Daly was stopped by ABC agents who thought she was carrying a 12-pack of beer. As it turns out, it was a package of canned sparkling water. Daly sued the state over the plainclothes and armed agents' use of force and eventually received a settlement of $212,500, though the state attorney general stressed that the settlement was not an admission of guilt.

Since that incident, the ABC vowed to improve its training practices and require all agents to wear body cameras. None of the three agents involved in the Johnson arrest are believed to have been wearing body cameras.

According to Inside Charlottesville, ABC officials at the time promised, "a reasonable common-sense philosophy regarding the correlation between the seriousness for an offense and the agents' response, ensuring that response is proportional to the suspected offense."

Whether or not Johnson was holding a fake ID is almost irrelevant at this point. It's hard to imagine what he might have done in those few seconds after walking away from Bradke at the door of the Trinity Irish Pub that resulted in a "proportional" response of a bloodied face.