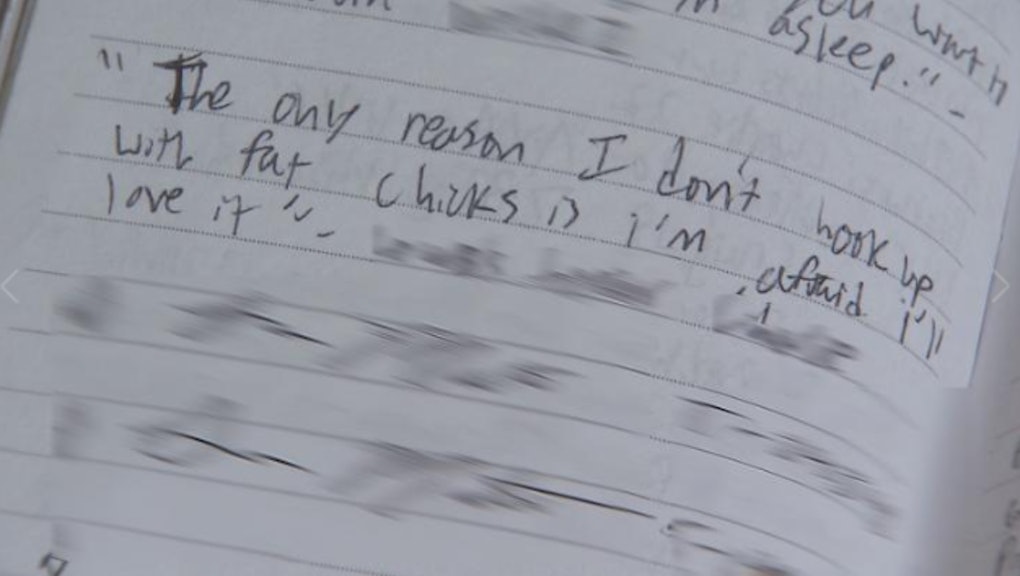 "Man that tree is perfect for lynching."

"It will be short and painful, just like when I rape you."

These quotes, along with many other horrible phrases joking about rape, violence and racism, were in a little green book discovered by employees at a Raleigh-area restaurant near the campus of North Carolina State University.

Local news station WRAL reported that the notepad appears to be some sort of pledge book belonging to a member of NC State's Pi Kappa Phi fraternity. WRAP reported that several of the comments appear to be signed with the names of brothers listed on the chapter's web site, though those names, as well as the chapter's Facebook and Twitter pages, have since been deleted.

The reaction: Since the little green book turned up, students and administrators have reacted with concern, disgust and outrage.

NC State senior Katie Perry, who says her coworkers found the book at an unspecified restaurant near campus, told WRAL it reveals a disturbing mentality among Pi Kappa Phi members at the university.

"This is just a group of 60-something young men at State making jokes about raping people, raping children, raping dead women, making very overt racist comments," Perry said to WRAL.

"I hope other fraternities are disgusted," she added. "I hope that if they do have this sort of thing going on in theirs, that they'll realize, whether they want to or not, that they should change, that they shouldn't promote this kind of behavior ... These aren't children. They're my age. They're saying this. They know what they're doing."

WRAL also reported a statement from Mike Mullen, NC State's vice chancellor for academic and student affairs, saying that the school "does not condone intolerant behaviors directed at any members of the community, and the content in the book that surfaced Thursday night is deeply troubling. The university is working swiftly to determine who is responsible."

Punishments are happening swiftly. After investigating the book and a separate sexual assault incident, NC State has already banned alcohol from more than 20 fraternities' social events (historically black frats and the Multicultural Greek Council are exempt). According to ABC News, the school additionally "plans training on diversity for chapters and other measures to increase accountability."

In a statement on its website, the national Pi Kappa Phi organization referred to the quotes as "reprehensible" and announced that the NC State chapter would now be held on "interim suspension." Pi Kappa Phi CEO Mark E. Timmes said staff members had been sent to Raleigh to investigate and that "these statements are inconsistent with the values of Pi Kappa Phi and will not be tolerated."

This is becoming a major problem: If this quote book had been found in a vacuum, then perhaps it would be easier to write off as the ignorant ramblings of a handful of immature college students. But fraternities have been increasingly proving themselves to be breeding grounds for trouble.

The Los Angeles Times reports another NC State frat, Alpha Tau Omega, was suspended March 1 after a student reported a sexual assault by some of its members. Kentucky.com notes that at NC State alone, three other frats are in trouble with campus authorities. Phi Gamma Delta is "on probation and subject to alcohol restrictions," Phi Beta Sigma is suspended until 2018 due to hazing allegations from 2014 and Theta Chi is suspending pending the results of another sexual assault allegation.

And that's just at one institution: Frats are making headlines for continued bad behavior everywhere from Penn State to the University of Michigan.

A recent video of Sigma Alpha Epsilon fraternity members at the University of Oklahoma chanting racist rhymes on a bus won the condemnation of none other than Old School star Will Ferrell. He responded to the incident in the New York Times by calling it "a real argument for getting rid of the system altogether, in my opinion, even having been through a fraternity. Because when you break it down, it really is about creating cliques and clubs and being exclusionary."

For his part, Bill Maher recently compared fraternities to the Islamic State group, equating the cultish behaviors of the two groups saying, "Jesus, why not just pledge ISIS? Hey, a cult is a cult, and that's what a frat is — a place where they strip you of your personality and rebuild it in their image. That's why when a girl says, 'I'm dating a frat guy,' no one ever says, 'Oh yeah, what's he like?'"

With incidents of fraternity members making racist comments, treating women like objects and generally acting like overall jerks mounting, institutions of higher educations and fraternities alike are already beginning to mull big changes. But in the meantime, it looks like it's time to question just how and why fraternities keep getting themselves and others in so much trouble.