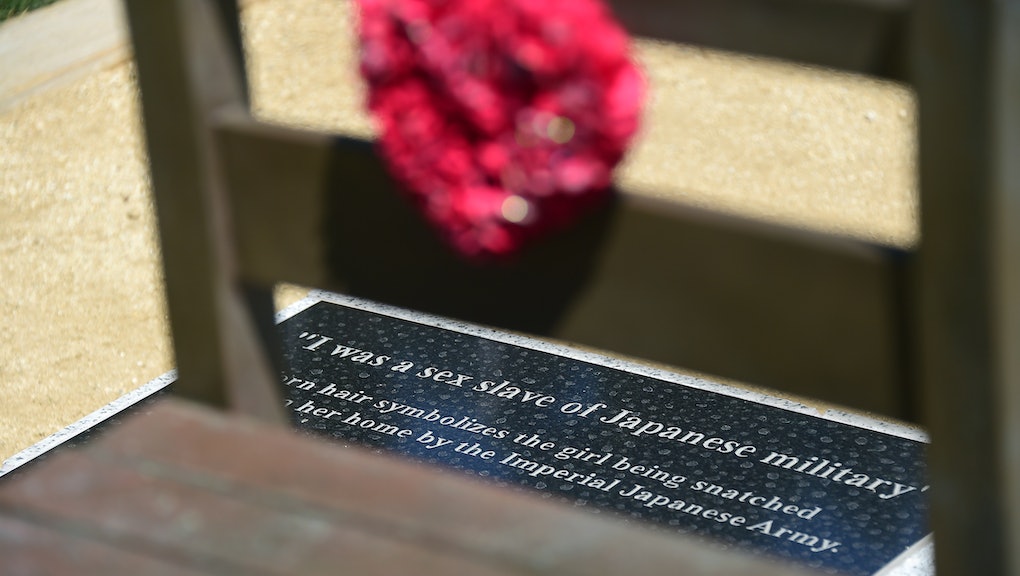 In a recent bizarre episode, a number of Japanese academics are pressuring American publisher McGraw-Hill to revise "many erroneous expressions" in a textbook published by the company that relates to Japan's wartime past, according to a report in the Washington Post.

At issue is the matter of so-called "comfort women" from occupied nations like China, South Korea and Philippines who were forced into prostitution for the Japanese military during World War II. Some Japanese academics and government figures have asserted that the women were not subject to official government coercion.

The bigger picture: The Pacific Theater of World War II was much longer and nastier than anything Europe experienced, and comfort women aren't the only aspect ripe for censorship. In fact, sexual slavery was just one of a litany of crimes that included massacres, grotesque medical experiments and plunder.

In a mere six weeks in the Chinese city of Nanjing, the Japanese army killed roughly 200,000 in a frenzy of rape and pillage that has since become known as the "Rape of Nanjing." By the time the war ended in 1945, 20 million Chinese were dead, along with millions more from Korea, the Philippines and Southeast Asia.

Against this backdrop, the dustup over comfort women is more than just an academic dispute. Rather, it appears to be the latest attempt by elements of the Japanese government to whitewash their nation's wartime history. Japanese textbooks have often attempted to downplay or completely ignore major wartime atrocities.

Prominent national figures, like the former governor of Tokyo, openly deny major historical events including the Nanjing Massacre. Prime Minister Shinzo Abe and other officials repeatedly visit the infamous Yasukuni Shrine, which honors, among others, a number of Japan's most heinous war criminals.

In 1993, the Japanese government did admit that "Japanese military was, directly or indirectly, involved in the establishment and management of the comfort stations and the transfer of comfort women." But recently, that statement has come under increasing pressure for revision or even retraction.

It's worth noting that Japan is not alone in this kind of behavior. Turkey continues to deny its primary role in the Armenian Genocide, which killed over a million people during and after World War I. Russia too has been taciturn about the millions of Ukrainians who died under Joseph Stalin during the "Holodomor" ("extermination by hunger").

During China's "Great Leap Forward," from 1958 to 1962, 36 million people starved to death, which, while not technically genocide, was still murder on a biblical scale. The Chinese government has gone to great lengths to paper over the calamity, banning the publication of books discussing it. Even in the U.S., Columbus Day is a celebrated national holiday, despite a growing awareness of the genocide Christopher Columbus began against the Native Americans.

The German example: One country that has been brave enough to come to terms with its wartime atrocities is Germany.

"In 10th grade, we went to Munich and went to a concentration camp," Cindy Klarwasser, a project manager at the German-American Chamber of Commerce, told Mic. "We all had to go ... I remember it was horrible."

In 1952, Germany agreed to formal reparations for the Holocaust, which were paid to Israel. Today, all Germans are taught about the Holocaust in their school curriculums; Holocaust denial is a crime in the country. At a ceremony marking the 70th anniversary of the liberation of the Auschwitz death camp, where 1 million Jews perished, German Chancellor Angela Merkel exhorted listeners not to forget the horrors that were perpetrated. Today, Germany enjoys good relations with Israel and is a pillar of the European Union, accomplishments that would have been impossible if old wounds were left open.

Remembering is painful, no matter what country you're in. Accepting that your parents and grandparents were responsible for killing millions of people is not easy. It is, however, necessary to move forward from tragedy, and, more importantly, to ensure that similar horrors never happen again.