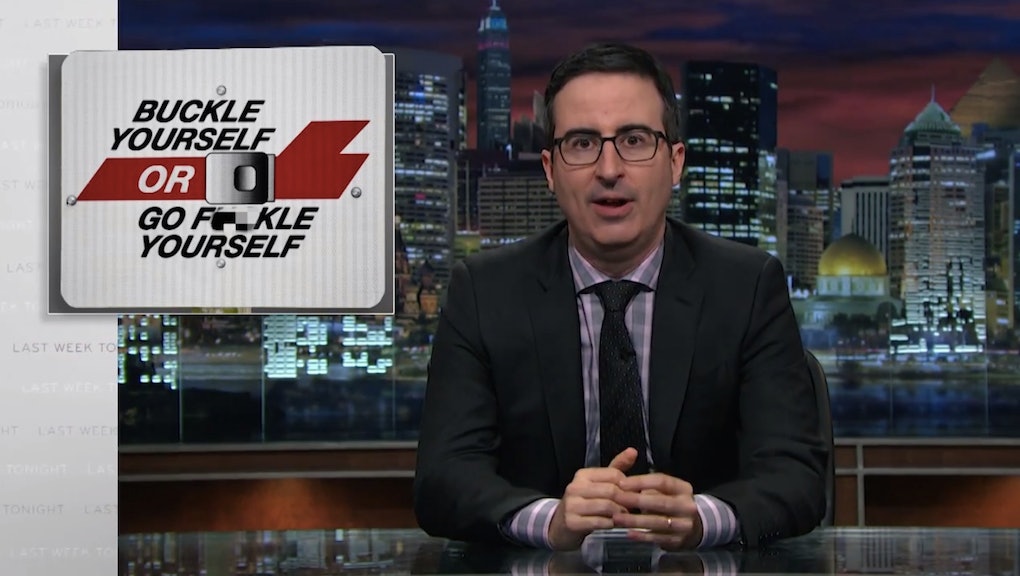 John Oliver Wants You to #ShutDownTheFuckBarrel

John Oliver and the Last Week Tonight team took on the world of municipal violations Sunday night. In what's no surprise for the man who made people rally around seemingly less-than-sexy causes like net neutrality and infrastructure, the British host quickly and effectively explained how people get trapped in unfair holes of debt — or, as he called it, "the fuck barrel." In doing so, he also showed why, once again, he excels in bringing the problems of those with fewer advantages to the attention of those with more.

Roughly defined, the fuck barrel is when someone is charged with a minor offense, but because they don't have money to pay the fine, they are quickly thrown down a hole of debt that's nearly impossible to climb back out of.

One possible way to fix the problem is to scale tickets for minor offenses according to one's pay grade, as suggested by users on Reddit. (Some countries already employ scaled ticketing systems.) Not a possible way to fix the problem: absolving tickets entirely. As Oliver noted, "No one is saying that people who break the law shouldn't be punished."

Punishment is one thing. Damning someone to a life of chasing debt simply because they're poor is another. As the voice-over says in the conclusion of the clip (featuring a collection of people sharing their own minor errors in life) this is an issue of "basic fairness, and it has to stop."

"People cannot end up in the fuck barrel for the little stuff we all do," the voice-over continues. "So it's time for all of us to come together as one to say: Shut down the fuck barrel."

How is Oliver so good at this? Why is he able to bring what would ordinarily be thought of as dull issues to the forefront and get people so riled up? Even Cher wants to shut down the fuck barrel!

What Oliver excels at is taking a microissue for a particular community, usually an underserved community, and making it macro. He helps his viewers understand what this would be like if it affected them and gets them riled up. Cher wouldn't want to be trapped in a hole of debt, so she calls for shutting down the fuck barrel. It seems simple, but it's taken Oliver's show to make such simple logic a weekly cornerstone of not just outrage, but useful outrage. That's what makes Last Week Tonight important. It gets us all to, well, shut down the fuck barrel.