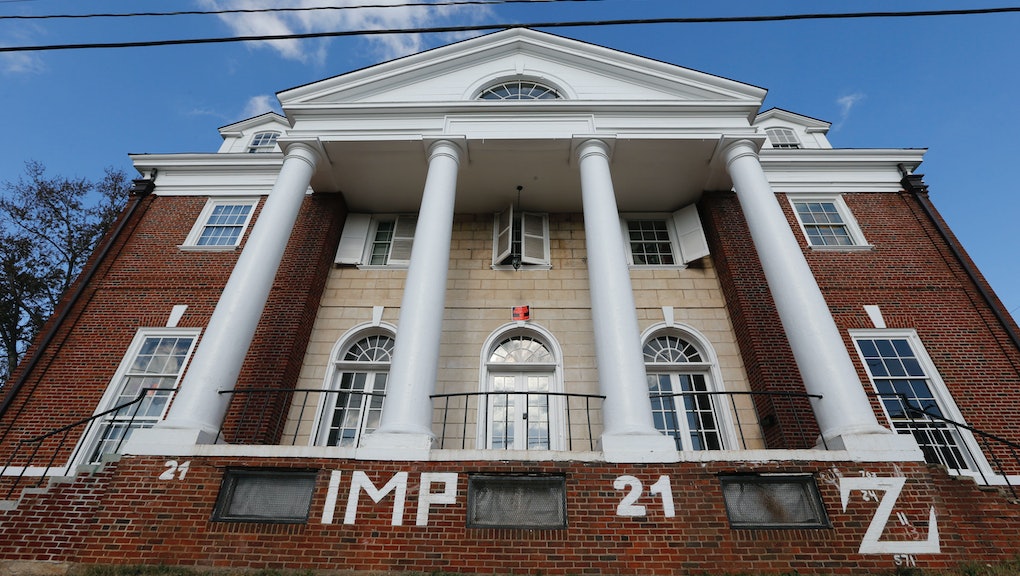 This afternoon, the Charlottesville Police Department held a press conference to reveal the findings of its investigation into the allegations of gang rape at the University of Virginia that rocked the Internet last fall.

On Nov. 19, 2014, Rolling Stone published a campus rape expose centered on a young woman known as "Jackie," a student at the University of Virginia who was allegedly gang raped at a campus fraternity party. Although the story, as reported by journalist Sabrina Rubin Erdely, at first seemed to be an emblematic account of the way in which institutions like fraternities and universities are still steeped in misogyny and fail survivors, other major publications soon began to reveal discrepancies in the report. The controversy culminated in Rolling Stone retracting the story on Dec. 5.

A police investigation was also launched to determine the facts of the matter.

There were inconsistencies: Today, Charlottesville Police Chief Tim Longo confirmed during the conference that there were discrepancies between Rolling Stone's account and what law enforcement officials were able to conclude from the facts available. While Jackie's friends "do feel like something occurred," the police chief stated, they don't "recall any physical injuries" and disputed the exact location and timing of their meeting after the alleged assault.

The investigation's findings also called into question a phone call Jackie said she made after the assault, whether or not a party occurred at the fraternity house in question on the night she said she was assaulted and the identity of the alleged perpetrator, among other details.

This doesn't mean nothing happened: It's important to note that the results of this investigation don't necessarily prove "that something terrible didn't happen to Jackie," Longo stated during the press conference. He continued, "We are just not able to gather sufficient facts to determine what that something could have been."

Jackie's roommate at the time of the alleged assault has also underscored this point in the past. "I can tell you that this story is not a hoax, a lie or a scheme," she wrote in an op-ed published in the Cavalier Daily in December. "Something terrible happened to Jackie at the hands of several men who have yet to receive any repercussions. Whether the details are correct or not, and whether the reporting was faulty, or the hazy memories of a traumatizing night got skewed ... the blame should never fall on the victim's shoulders."

We still must believe survivors: This sentiment is one survivors and activists have been championing since the story was first called into question. While some have stated that this case may be read as a "setback" for the movement and that it "wrecked an incredible year of progress," the incident has also launched an important conversation about the complex experience of survivors and why they should be believed.

Regardless of the particulars of Jackie's case, the fact remains that just about 2% to 8% of rape claims are determined to be false, and rape remains a highly underreported crime. Furthermore, it's not uncommon for survivors to misremember the facts of their assault or to manage the experience in a variety of ways. It makes sense, then, to believe survivors. As activist Zerlina Maxwell wrote in the Washington Post, "the costs of wrongly disbelieving a survivor far outweigh the costs of calling someone a rapist."

It's this reality that led many to launch hashtags like #IStandWithJackie and #IBelieveJackie to offer support for her, as well as all survivors who have felt discredited.

This case is not closed: For now, this particular case, the officer noted, is suspended rather than closed. This suspension acknowledges that while the police found insufficient evidence to support the occurrence of the assault as reported by Rolling Stone, it's still entirely possible that an assault took place. Rolling Stone will publish an external review of the original story conducted by the Columbia University Journalism School in April.

Ultimately, this controversy is about much more than the validity of a single case of sexual assault on one campus. It is about the way in which we approach survivors' stories. Rather than focusing on the discrepancies of a single case, this investigation, and the treatment of Jackie, underscore that surviving assault is a complex experience about which the public needs to continue to be educated.