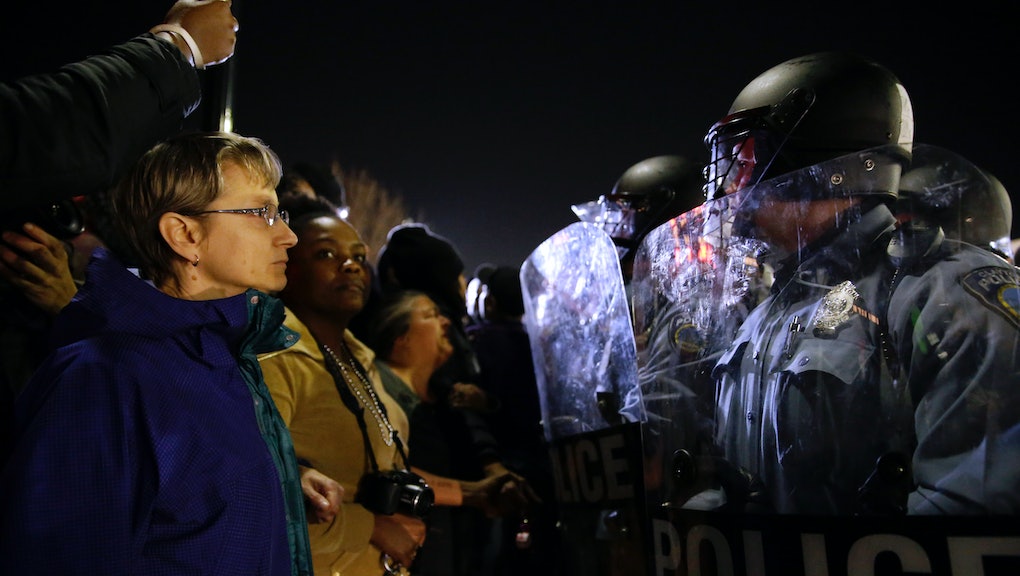 What starts as a routine traffic stop turns into an argument. Tempers flare, handcuffs come out and soon, the suspect is dead — but the media can't report which officer fired the shot that ended the driver's life.

This is a scenario that could soon happen in Arizona, where a Republican-backed bill would hide officers' names from the public for up to two months following a violent encounter.

According to NBC, Senate Bill 1445 would prohibit Arizona law enforcement agencies from releasing the names of officers "involved in a use of deadly physical force incident that results in death or serious physical injury" for 60 days following the incident.

The bill has already passed through the Arizona House of Representatives 44-13 and will go to the Senate for another vote this week before it goes to Gov. Doug Ducey's desk for approval.

First Amendment and public records attorney David Brodney told NBC that the bill would increase the "trust deficit" between police and the public, adding that "People cannot believe in what they are not permitted to observe." Retired policeman and Arizona Police Association executive director Levi Bolton, however, defended the law. He told NBC that bill was intended to protect "the welfare of an officer who is not a suspect."

So who's right? It would certainly not be pleasant to be subject to public scorn and fury just because you were doing your job. But the reality is that officers rarely face any official consequences even when they are accused of serious misconduct.

In some, if not most, jurisdictions, police officers essentially act with impunity. In 2014, FiveThirtyEight's Reuben Fischer-Baum found that just 12% of officers put on trial for misco ever faced prison time, compared to 48% of felony defendants in the general population. The Los Angeles Daily News recently reported that in every single one of the 409 police shootings in L.A. County reviewed between January 2010 and the end of 2014, "prosecutors determined on-duty officers were justified in using deadly force."

"For a cop to be indicted and especially to be convicted later of a crime in these kinds of situations is very, very unusual," police practices consultant Chuck Drago told Talking Points Memo in 2014.

The oversight mechanisms in place at most American police departments, such as internal affairs investigators and review boards, mostly function to shield officers from allegations of misconduct.

The Nation's Chase Madar failed to find a single person who could name a major U.S. police department with effective oversight. New York Civil Liberties Union lawyer Ron Kuby told Madar that in New York, the Civilian Complaint Review Board rarely even bothers to put excessive force complaints on the officer's file. Officer Daniel Pantaleo was still on the job despite facing three civil rights lawsuits even before he put Eric Garner in a chokehold, including one that resulted in a settlement of $30,000.

Even in extreme cases, police departments rarely reform themselves until external forces like state agencies or the Department of Justice step in to make them. In Arizona, the Maricopa County Sheriff's Office in Phoenix has displayed a disturbing pattern of excessive force, racist police practices and allegations of massive misconduct, all of which have gone largely unpunished.

Given that officers almost never face any consequences for their actions and that police departments rarely decide to reform themselves, this law could be a dangerous blueprint for eroding the public's confidence in the police by essentially expecting officers to be pre-emptively treated like victims.

They want to keep officers' names out of public view because they know putting a face on police brutality encourages public outrage over perceived abuses.

"This is being packaged as a cooling-off period. What many people in the community believe is this could build a covering-up period," Arizona State Rep. Reginald Bolding, a Democrat from Phoenix, told NBC. "You're actually increasing tension between the community and the police that serve them."

That is an awful shame, because at the end of the day, everyone in this country deserves a police force that is accountable to its citizens and doesn't treat everyone it comes across like a potential criminal until proven otherwise. Instead, Arizona just wants to keep the public in the dark about what's going on.