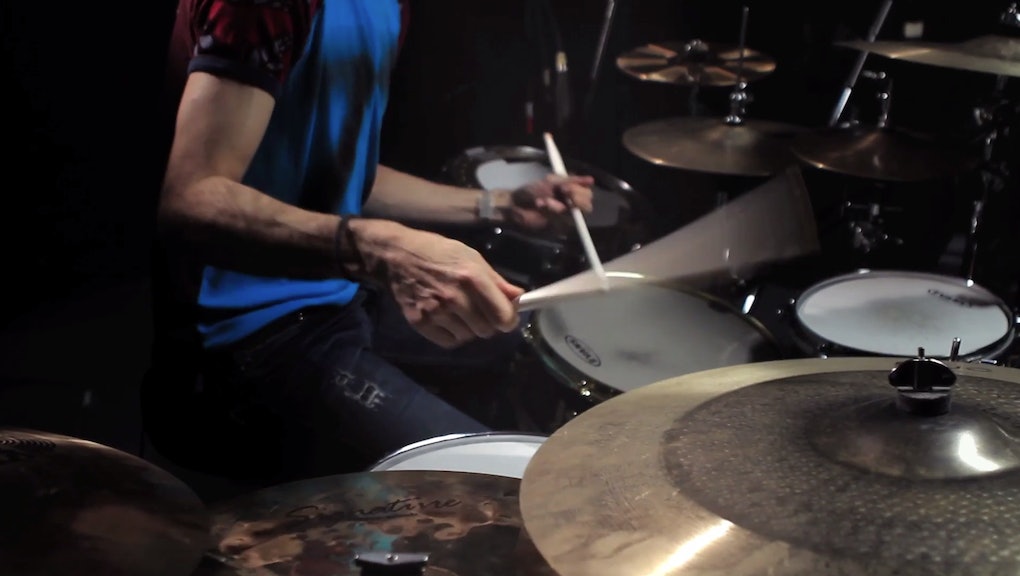 The live drummer is an endangered species in much of today's popular music. Modern post-production makes it supremely easy to substitute programmed drums for an imperfect human performance, or even to buff out errors from a live take. Increasingly, a good drummer is simply an afterthought for producers.

But this trend is definitively misguided. Recent scientific studies show there are certain aspects of human-created rhythm that machines cannot replicate, or can only replicate poorly. These tiny imperfections are exactly what draw us to a real human drum player. Live drummers aren't going anywhere anytime soon.

Listeners crave imperfection. Even the most professional and seasoned drummers cannot keep time like a drum machine. They fluctuate slightly when attempting to play along to a steady, metronomic beat. But these variations are actually extremely pleasing to the ear.

"The offsets are typically small, perhaps 10 to 20 [milliseconds]," wrote researcher Holger Hennig in a 2012 Physics Today article. "That's less than the time it takes for a dragonfly to flap its wings, but you can tell the difference in the music."

Many electronic music programs understand these principles and feature "humanizing" — aka "randomizing" — functions to help producers add imperfections back into the music. It turns out that human beat variation is not entirely random. In 2011, Hennig's team had looked carefully at the timing of a professional drummer and found that while his hits shifted ahead and behind the beat, they shifted according to a set pattern. Not only that, the highly precise patterns lasted for minutes. "It is as if the human brain has an enduring memory for those deviations," wrote the team in Physics Today.

These kinds of long-range rhythmic variations have been used to great effect by some of our culture's greatest drummers. Questlove purposefully drags way behind the beat on D'Angelo's neo-soul albums, to give that music its "drunk-sounding" swagger. Tony Williams, Miles Davis' virtuosic 19-year-old drummer in his late '60s quintet, was famous for his ability to "speed up" the beat by pushing just slightly ahead of the rhythm.

But it's more than just feel. While programs can be updated to mirror a more human feel, they still cannot produce the same tremendously wide variety of rhythmic variations that research shows humans prefer.

"Digital computers are binary machines, which means they compute tasks making decisions between zero and one — yes or no," says musician Jojo Mayer in the mini-documentary Between Zero and One. "When we play music and generate it in real time, when we improvise, that decision-making process gets condensed to a degree where it surpasses our capability to make conscious decisions anymore. When that happens, I am entering that zone beyond zero and one, beyond yes and no, which is a space that machines cannot access yet. That's the human experience — right between zero and one."

Mayer makes a compelling demonstration, cycling through a torrent of drum and bass-influenced rhythms that no digital interface could execute while maintaining the same levels of speed, originality and style:

Responsiveness is the key: Nate Wood, multi-instrumentalist and drummer for the jazz band Kneebody, also believes improvisation and live presence are the key distinguishing factors that pre-programmed drums can't match. Drumming may vary due to set patterns, but those patterns are always responding to something that only the most talented musicians are sensitive to.

"[T]he main advantage is improvisation, especially in a band context, as it makes for a much more exciting performance," Wood told Mic via email. "Being able to react to the energy of the audience can create more energy. Visually it might be more exciting as well."

Music is catching on: Though heavily programmed drums are common throughout the industry, a lot of traditionally electronic styles of music are working to bring the power of the live drummer to their stages. Rappers such as Chance the Rapper, Childish Gambino and Kendrick Lamar have all started incorporating more live instrumentation into their sets. Even electronic acts like AraabMuzik, who creates many of his rhythms live using a sequencer, is mixing live instrumentation into his electronic sounds.

The dynamism and irresistibly "human" feel that live drummers bring to musical rhythm will not go out of style anytime soon. No machine will ever be able to replace the heart and soul of a live drummer.