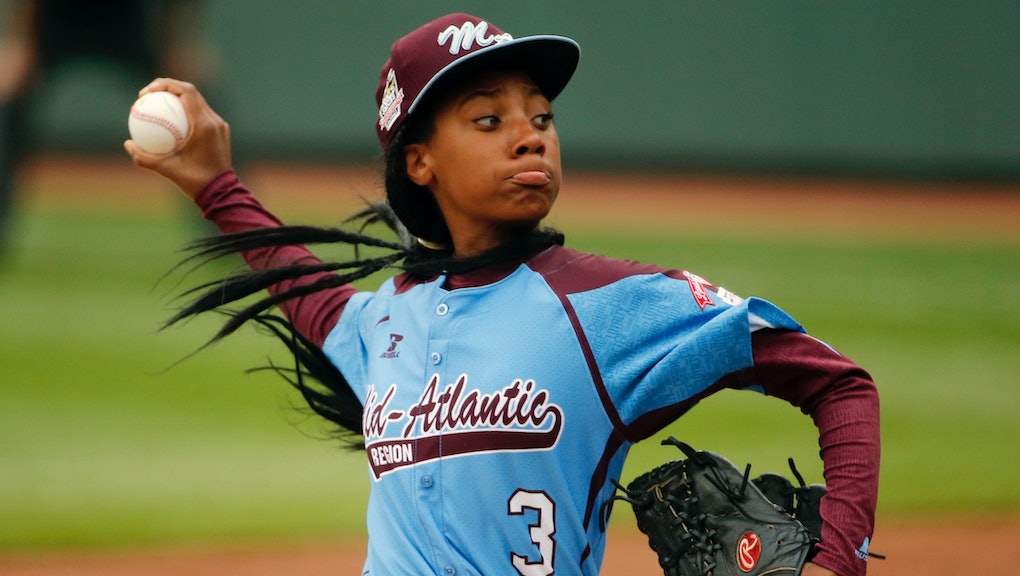 Philly.com reports that Joey Casselberry, a first baseman for Bloomsburg University in central Pennsylvania, was kicked off his school's baseball team for an offensive tweet — since deleted, along with his Twitter account — that he posted about Davis on Friday:

"Disney is making a movie about Mo'ne Davis? WHAT A JOKE. That slut got rocked by Nevada."

This was not an isolated incident. For years, female athletes and fans have endured derision, dismissal and outright hostility for playing, coaching or generally expressing opinions about sports.

This hostility fueled headlines last week when actress and University of Kentucky basketball devotee Ashley Judd gave a troubling account of her experiences as a female sports fan on the Internet. After tweeting statements critical of the Arkansas Razorbacks, whom her Wildcats were playing, Judd received such a "staggering" volume of misogynistic and sexually threatening responses that she says she is pursuing legal action.

Judd is not alone. "What happened to me is the devastating social norm experienced by millions of girls and women on the Internet," she wrote in an op-ed for Mic. "The themes embedded in this particular incident reflect the universal ways we talk about girls and women," including, she adds, female victims of rape and sexual assault.

Judd's article points to a disturbing fact: that women in sports are subject to an abusive double standard that eludes their male counterparts. Male players and fans are not typically bombarded with threats of sexual violence the second they open their mouths to speak, nor are they shunned from sports or sports-related conversation by virtue of their gender.

The Long Ball View: The vitriol directed at Davis — who on Aug. 15 became the first girl to pitch a shutout in Little League World Series history — is compounded by the fact that she is not just female, but, at age 13, a child. More specifically, Davis is a black child. And as recent history can attest, the societal aggressions leveled at black women and black children in America is illustrated by examples as far-ranging as the police killing of 12-year-old Tamir Rice in Cleveland last November to the relative lack of news coverage around black female victims of police and vigilante violence.

But in the sports world, black girls and women have faced an especially well-documented set of deterrents. Tennis star Serena Williams has endured racial taunts throughout her career. In 2014, Russian Tennis Federation President Shamil Tarpischev described Serena Williams and her sister Venus as the "Williams brothers." MSNBC shock jock Don Imus was suspended by his network for calling the Rutgers University women's basketball team "nappy-headed hoes" in 2007.

Combined with other major institutional disparities — black girls are more likely to face harsh school discipline and involvement with the juvenile justice system than their white counterparts — these incidents and others highlight the unique set of barriers facing young black women in America. Joey Casselberry's tweet is just a small part of a much bigger problem.

For her part, Davis has handled this incident with near-preternatural grace. Shortly after Casselberry's dismissal, Davis reached out to his team and asked that he be reinstated, TMZ reports. "I know right now he's really hurt," she said in an ESPN interview. "Everyone deserves a second chance."

Perhaps he does. Perhaps he doesn't. But either way, the undercurrent of misogyny that informed his comments — and those directed at Ashley Judd, Serena Williams, the Rutgers basketball team and any other women facing backlash simply for loving and playing sports — definitely has to end.