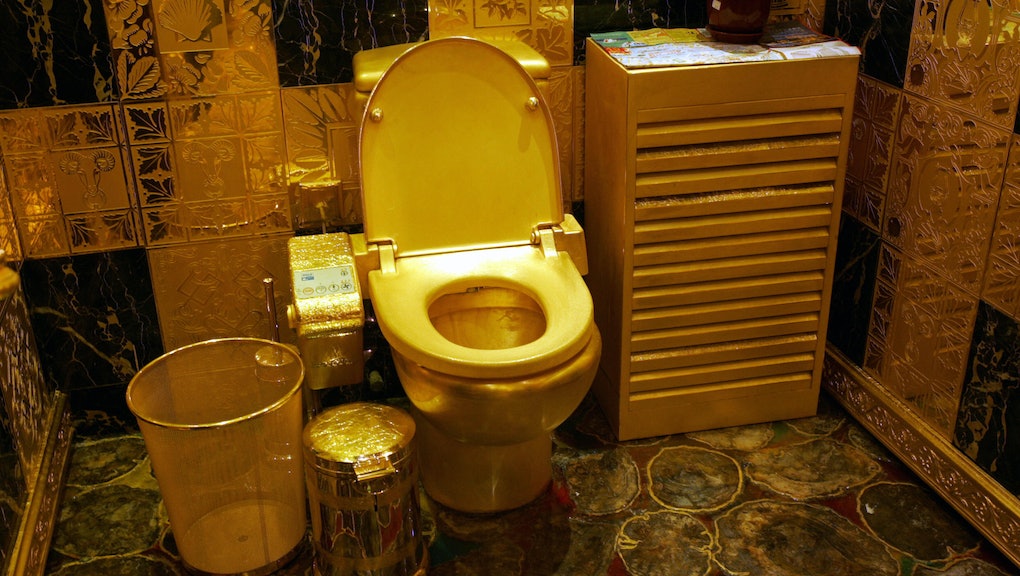 Americans Are Literally Flushing Millions of Dollars Down the Toilet

Scientists have confirmed that Americans do, in fact, shit gold.

Researchers led by United States Geological Survey research geologist Kathleen Smith, Ph.D, have plumbed the depths of America's sewer systems to analyze just what is in all that sewage.

The result? High levels of precious metals such as gold are washed down the United States' toilets, showers, sinks and drainpipes every year.

The science: In a press release posted on the American Chemical Society website, Smith said that "There are metals everywhere ... in your hair care products, detergents, even nanoparticles that are put in socks to prevent bad odors."

Many of these metals are swept down drainpipes into waste treatment plants. There, various physical, biological and chemical methods separate the water from what amounts to roughly 7 million tons of biosolids every year in the U.S.

According to Smith, who has studied samples of biosolids from large and small communities across the U.S., that waste contains enough valuable metals that amounts like this would be considered "commercially viable to mine." In other words, nothing to scoff at.

"The gold we found was at the level of a minimal mineral deposit," said Smith in the press release. "If you can get rid of some of the nuisance metals that currently limit how much of these biosolids we can use on fields and forests, and at the same time recover valuable metals and other elements, that's a win-win."

Backed up by other research: An Arizona State University study published in Environmental Science & Technology in January found similar results and concluded that a city of 1 million people could produce approximately $13 million in precious medals each year, or about $280 per pound of biosolid.

"Initially we thought gold was at just one or two hot spots, but we find it even in smaller wastewater treatment plants," lead study author Paul Westerhoff told Fast Company.

Unfortunately, Westerhoff said there currently exist no commercially viable methods of extracting precious metals from the sludge. "There's nothing you can buy off the shelf today to do it," he added. "But are there strategies? Yeah, we think there are. One of the keys is understanding the structure of the metals — these things are very small particles — because there are different approaches to getting them out of the water."

It could be good business: While mining poop for gold might seem like a strange, and kind of gross, endeavor, the waste has to be handled in one way or another, so why not make the most of it?

"We need to make this push where we stop thinking about it as a liability and instead we think about it as a resource," Yale University engineer Jordan Peccia told ScienceMag earlier this year. "And anything we can find in sewage sludge that's valuable, it's good."

And the good news is that extracting the gold is indeed feasible. In 2009, Reuters reported that a sewage facility in Suwa in central Japan had managed to find about 1,890 grams of gold per ton of ash in incinerated sewage, a "higher gold yield from sludge than can be found at some of the world's best mines." It had sold some of the recovered metal for around 5 million yen (over $55,000) and expected to sell about 15 million yen more's worth of gold over the course of the fiscal year.

If researchers develop a commercially viable method for processing waste to remove useful and expensive, then sewage itself could become a valuable commodity — and why not? Burning it, burying it and destroying it just lets all that stuff go to waste. Besides, no one ever bothers to ask just where their shiny new gold necklace came from.