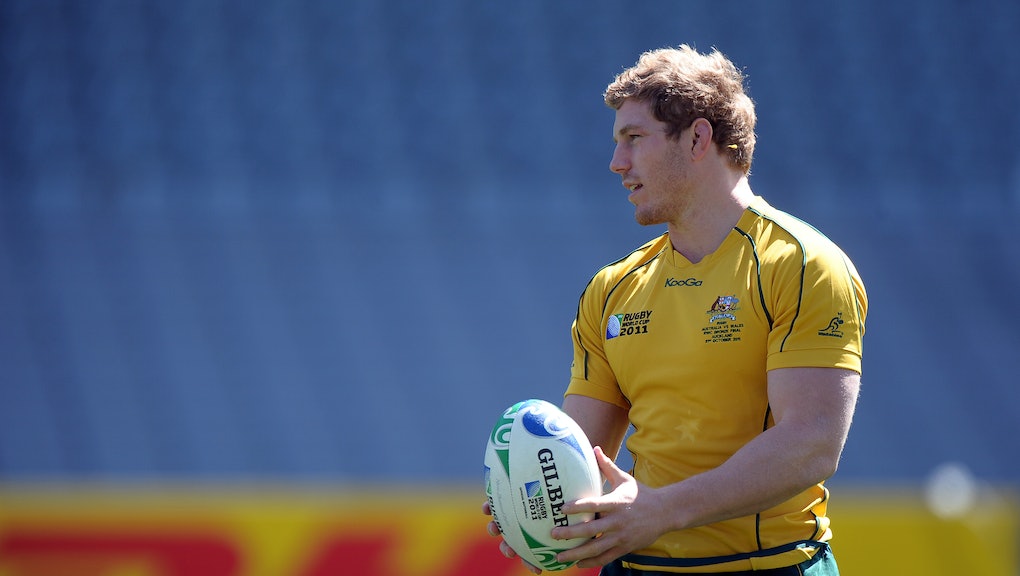 This week, two stories that came out of the rugby world showed that while some players are doing an excellent job standing up to hate, others are still part of the problem.

The good: During the final few minutes of a Saturday match between the Australian Capital Territory Brumbies and the New South Wales Waratahs, two teams in the Australian Rugby Union, Brumbies' vice-captain David Pocock flagged down a referee to call out members of the Waratahs for repeatedly using homophobic slurs during the match, specifically calling players "faggots."

"You heard that sir ... you can't say that, there could be gay players out there," Pocock told the referee, reports the Sydney Morning Herald. "As players, we've said the Brumbies aren't going to tolerate any homophobic slurs, I just made that clear to the referee that it's unacceptable."

"You can be the toughest man in the world, but it's got nothing to do with using that sort of language," he added.

Justice was served as the ARU acted quickly to fine the main perpetrator, the Waratahs' Jacques Potgieter, $20,000, with $10,000 suspended. Luckily, the fine sent Potgieter a clear message.

"I'm very sorry for any offense caused by what I said on the field during a heated encounter," Potgieter said, according to the Sydney Morning Herald. "It was an offhand remark made without thought for the hurt it could cause to those around me."

The bad: While Pocock's actions can surely be celebrated, they come at a time when less admirable behavior has clouded the rugby world. Jezebel reported Monday it had obtained an audio recording of the University of Mary Washington rugby team from Fredericksburg, Virginia, chanting in upbeat voices a vile fight song about necrophilia, rape and violence against women. The lyrics were:

A recording was also made available:

As Jezebel reported, though the university disbanded the rugby team indefinitely once it obtained a copy of the recording, the story reeked of disconcerting details. There was the backlash against those who called the rugby players out, the apparent cloak-and-dagger nature with which the situation was reported and handled, and a storm of sexual assault debate that brewed on campus after the incident, some of which almost turned ugly.

The two events share concerning similarities. Both cases stemmed from instances of male rugby players actively degrading those other than them using slurs in the name of sport and contest.

But in Pocock's case, even when the act was arguably less severe, he was able to fearlessly stand-up for what was right and act against the homophobia. In the UMW case, however, fallout was riddled with questions and backlash, indicating a university culture that either ignored or tolerated such language.

As the Morning Herald's Andrew Webster noted, while Pocock did take some flak for calling Potgieter out — comments on the Herald website were filled with messages like "Pocock should concentrate on his game or stand for parliament" — he was able to stand-up for what he knew was right.

But when Paige McKinsey, president of UMW's Feminists United on Campus, penned an op-ed in the school newspaper about the chant, the campus became a de facto battle ground over feminist issues. McKinsey said hateful messages appeared everywhere, and she eventually felt threatened by the rugby club, telling Jezebel, "An entire group of men approached me. It made me feel very unsafe."

To be sure, these problems are not limited to the rugby world. Athletic fields can too easily become a breeding ground of coarse language that extends to the point of homophobic or racial slurs. But when these kinds of injustices are carried out, athletes or anyone else privy to the incident need to feel safe calling the offenders out. If not, nothing will ever change.

"Our job as players is to quell it out," as Pocock told the Morning Herald. "That's what we did, I don't think it should be a witch hunt. It's about educating the players and ensuring that rugby does become more inclusive."