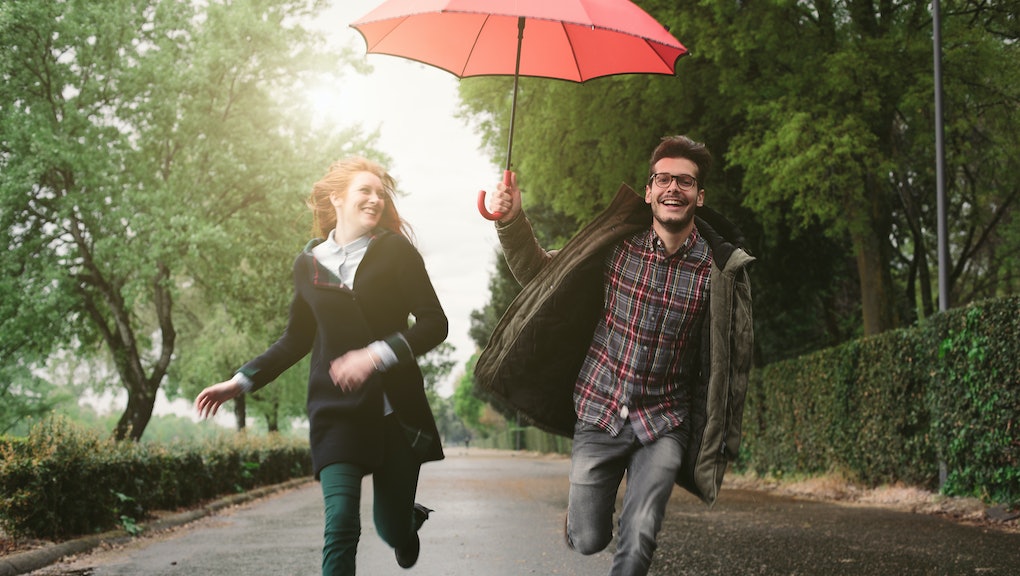 Feeling a little out of the dating game after a winter of retiring home by the late hour of 7 p.m., putting on two layers of sweatpants and getting cozy with Netflix? You're not alone — turns out all the other potential dates have had the same idea.

But time to peel off those sweatpants, because it's all about to turn around. If dating has a season, it's spring.

Picking back up: After the online dating frenzy leading up to Valentine's Day, many of us drop off into a winter dating hibernation, complete with dry spells. As Broad City's Ilana Glazer told Vulture, her libido has its seasons, and winter isn't one of them: "I think it's the weather right now. Because I just get naturally glum in the winter and I think my body is responding to the cold."

But spring may literally warm us back up. The online dating site Zoosk analyzed 9.6 million conversations, over 850,000 signups and over 66 million member sessions to determine whether spring fever does, in fact, exist. According to a press release, the study found that 34% more first messages are sent in the spring every day.

The site also found that 28% more "deep conversations" — two or more messages — begin in the first two weeks of spring, while the site overall sees an 11% increase in daily registrations.

Not only are more singles reaching out to each other in early spring, but people are more likely to couple up with the first sign of warm weather. In fact, Facebook's data team studied relationship status changes in 2010 and 2011 and found that the fifth biggest day for a net increase in relationship statuses is April 1. Across all age groups, March and April remained consistently high months for new relationship statuses compared to the summer months.

Stepping into spring fever: The common inspiration behind winter hookups is actually a desire to hunker down (see: "cuffing season"). The surge in springtime interest, on the other hand, is more likely rooted in renewed enthusiasm to get out there and get our social lives going again.

Part of this sudden dating pickup might relate to what we call "spring fever" — those physiological changes we experience as the weather levels out. A 2005 study published in Psychological Science found that the more time people spend in mild sunny weather, the better their mood and cognitive skills.

Additionally, we might feel a sudden burst of energy due to changes in sunlight. According to Scientific American, "It has been thought that our increased energy in the spring months is somehow linked to the decreased duration of melatonin production, due to shorter nights." With this sense of rejuvenation comes an increase in sex drive, as reported by the New York Times, which might be why you feel more attractive and why you're suddenly popular on Tinder.

It's no wonder that dating favors the season of the bright-eyed and bushy-tailed. With everyone finally having the energy to go on all those kayaking outings, music festival dates and outdoor movies we keep promising we'll go on, it may really be the best time to get out there. Plus, we won't look like marshmallows in unflattering puffy jackets.

As poet Alfred, Lord Tennyson said, "In the Spring a young man's fancy lightly turns to thoughts of love." If anything could get you out of your winter hibernation, it should be that.