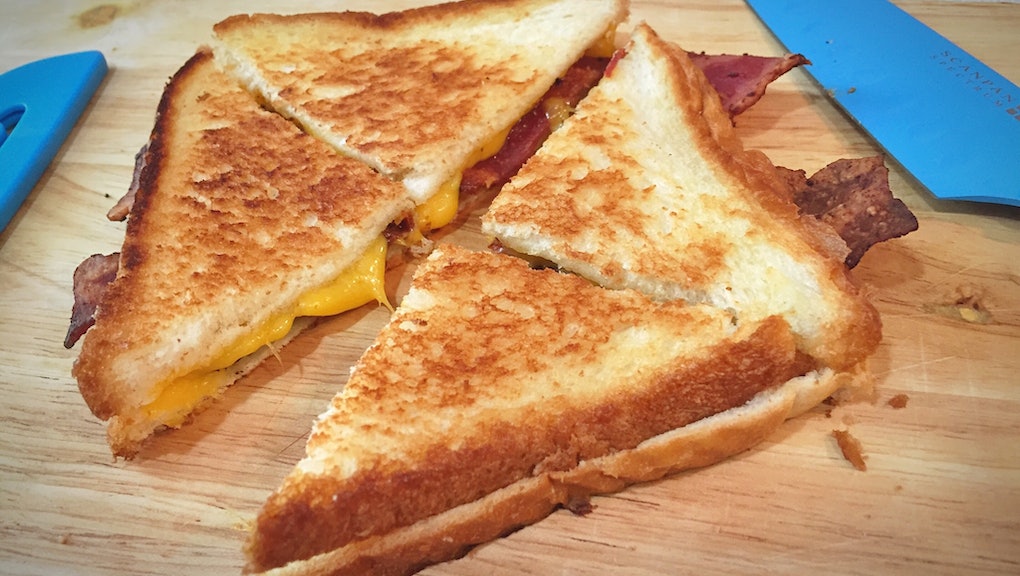 The answer to society's most pressing (heh) question is in: Yes, grilled cheese eaters do have more sex.

That's according to a survey conducted by Skout, a "mobile social networking site" few of us have heard of. In honor of National Grilled Cheese Day, the company surveyed about 4,600 of its users and found that 73% of people who love grilled cheese sandwiches have sex at least once a month, whereas 68% of non-grilled cheese lovers are doing it monthly — a small difference, but still.

So what does that say about grilled cheese lovers, those devoted to the perfect combination of crunch and goo, of salty to creamy? Are they more sensuous, more attentive, more lustful?

Eh, there's pretty much no way of knowing, at least not from a survey that teases out what are, at best, correlations. But that doesn't stop us curious humans from drawing conclusions about our sex lives from our daily habits. Here are some other people who are probably having more sex or are better at it than the average Joe, based on surveys and studies, some of them more scientific than others.

People who use emojis have more sex: Match.com's latest Singles in America survey of over 5,000 singles found that "54% of emoji users had sex in 2014 compared to 31% of singles who did not," Helen Fisher, a Rutgers University biological anthropologist who worked on the survey, told Time. Thumbs up and a winky face to all you emoji-lovers out there.

Art students have more sex: The classic stereotypes held true in a survey of nearly 12,000 undergrads by British student news site the Tab. While 11% of computer science majors had never had sex, only 1% of art students never had. (Same went for sociology students, but somehow that stat is less sexy.)

Women with lots of guy friends have more sex: A study in the Journal of Comparative Psychology found that couples had more sex when the woman in the couple had more interactions with other guys. It goes back to evolutionary-based jealousy and competition, reports the Huffington Post, rooted in our early days as a species. But hey, it may just be that guys are into the "cool girl."

Couples who run together have more sex: A 1,000-person survey by (who else) a running company called Brooks found that 71% of men and women "believe running together as a couple plays a part in their sex life," and 75% of men and 68% of women said the more miles they ran together, the more they "increased their mileage between the sheets." We hope they showered first.

Republicans have more orgasms: When Match.com released its singles survey in 2012, things got political: Republicans "reported the highest frequency of orgasm," wrote the Daily Beast, with over half coming during sex. For liberal Democrats, on the other hand, only 40% climaxed every time they had sex.

Teachers have a lot of sex, but not the most: Redbook magazine surveyed 400 straight married women about their husbands' professions and came to certain conclusions about certain jobs. Among them was that "teachers and government workers" are the second-most likely of the professions surveyed to have sex every day, at 13%. Funnily enough, the "suits" (lawyers, consultants, accountants") were the most likely to want sex every day, but got it less (10%).

People who do CrossFit have more sex: This year's Match.com Singles in America survey also found that CrossFitters not only "have more frequent sex, but that they also go on more dates than singles who partake in any other form of exercise," reports the Observer. Well, that does make sense from an adrenaline perspective.

Of course, most of these are not deep scientific investigations into why our brains and libidos work the way they do. There are clues out there as to why some people have more sex than others — age, health, time management and overall desire being among them — but nothing that should be taken to much to heart.

After all, what if you're a Republican runner who hates CrossFit, loves grilled cheese but can't stand smiley-face emoji? As the Cut put it in response to the emoji sex study, "Hmm."