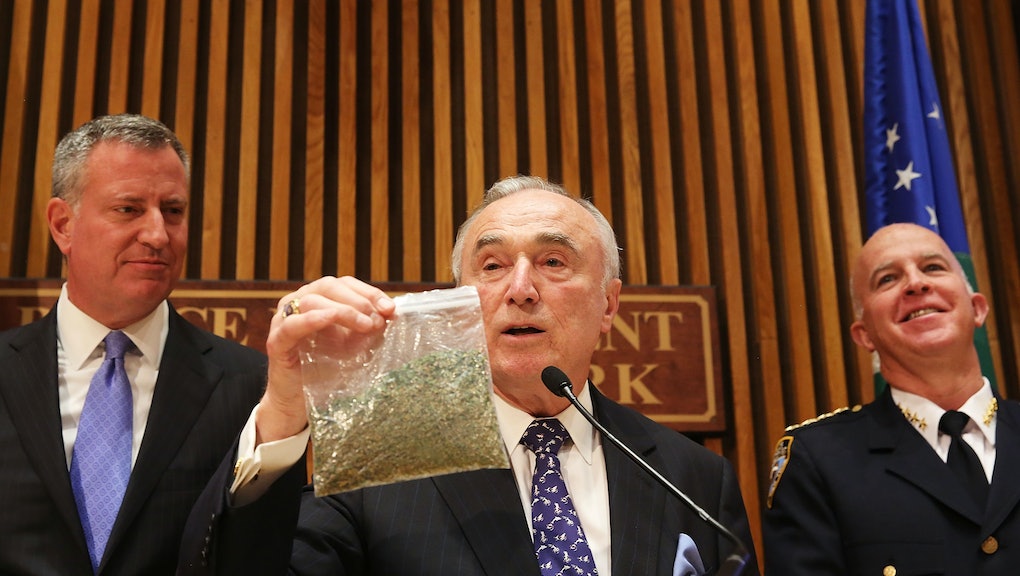 Not surprisingly, the number of misdemeanor marijuana charges have dropped precipitously since the new policy went into effect Nov. 19. An Associated Press report found a 75% drop in arrests the next month, with about 460 in December 2014 compared to 1,820 the previous year. Through March 8, the city had recorded 1,956 low-level marijuana busts in 2015, a 62% decrease from the 5,157 conducted over the same period a year ago, according to the New York Times.

But for hundreds of thousands of New Yorkers, the decision came more than three decades too late. The Empire State decriminalized the possession of less than 25 grams of marijuana in 1977, provided it was not in "public view." But the city largely ignored the law for the better part of 38 years, busting anyone caught with even a small joint. Police officers would exploit the loophole by asking suspects to empty their pockets, thereby bringing drugs into "public view." Since the mid-1990s, those arrests often followed a police search made permissible by NYPD's controversial (and now rare) stop-and-frisk tactics.

With people of color being the disproportionate target of those arrests — the American Civil Liberties Union found that blacks were nearly four times more likely than whites to be arrested on marijuana charges, despite using it at the same rate — the city is moving, however slowly, toward a more just law enforcement standard.

"It is certainly an improvement that marijuana arrests are down," Morgan Fox, communications manager for the Marijuana Policy Project, told Mic. "Not only is it good in terms of social justice because fewer people are being punished for using something that is safer than alcohol and communities of color are bearing less of the brunt of arrests, but the police now have more resources that they can direct at preventing and solving serious crime."

False threats: Violent crime has been on the decline in New York City for more than two decades, in line with a nationwide trend, that has continued through the four months of decriminalization. Felony assault complaints in the five boroughs for the week of March 9 to 15 were down 9.1% from the same period in 2014, according to CompStat figures from the NYPD. The year-to-date total has decreased by nearly 500 complaints, a 12.8% fall. There has been a 6% decline in felony assault arrests over the past 24 months and more than 53% in New York City over the past 22 years.

Despite those positive trends, the commissioner has remained an often dissembling skeptic. During a press conference on March 2, Bratton blamed the recent jump in homicides on "the seemingly innocent drug that's been legalized around the country." There have been 66 murders so far in 2015, compared to 55 over the same period in 2014, according to CompStat.

"In this city," Bratton said, "people are killing each other over marijuana more so than anything that we had to deal with an '80s and '90s with heroin and cocaine."

It was a searing accusation, and a completely bogus one.

"If, indeed, there is violence in the illicit marijuana marketplace between those who are selling marijuana, there is one very basic and smart way to solve that problem," Tony Newman of the Drug Policy Alliance wrote in a blog for the Huffington Post, "end marijuana prohibition."

The roadmap: "Starting decriminalization at the local level makes a lot of sense as a way to change policy in a concrete manner and help stop arrests without the tremendous resources and political support necessary for a statewide campaign," Fox said, turning his focus to what New York City's decision means in the larger fight to end marijuana prohibition. "These types of laws are great at keeping the conversation going at the state and local level, and their limited scope make them easier to implement than state laws."

City and state governments in Colorado, Washington state, Alaska and Oregon all decriminalized low-level possession before voters approved initiatives to legalize and regulate recreational use. There are "currently 12 states [and an untold number of local jurisdictions with] laws that reduce the penalties for possession of small amounts of marijuana to a civil fine," according to the Marijuana Policy Project.

In New York, state Sen. Liz Krueger (D) has introduced a modified proposal — her first attempt failed in 2014 — to end marijuana prohibition statewide. Speaking to WNYC about legal drugs like alcohol and cigarettes, she said, "We don't outlaw those, we put regulations on them and we tax them. That is a failed model after 80 years of the drug wars against marijuana," according to the Observer.

Other state legislators remain unlikely to sign on, especially with Gov. Andrew Cuomo (D) keeping up his vocal opposition. But the tide is turning. New York legalized medicinal marijuana in September 2014. Now, with New York City primed for its annual springtime resurgence, the green shoots of March and April will be a pleasant afterthought to police and prosecutors who are no longer be compelled to waste their time arresting, processing and making hardened criminals of teenagers caught holding a happy little joint.