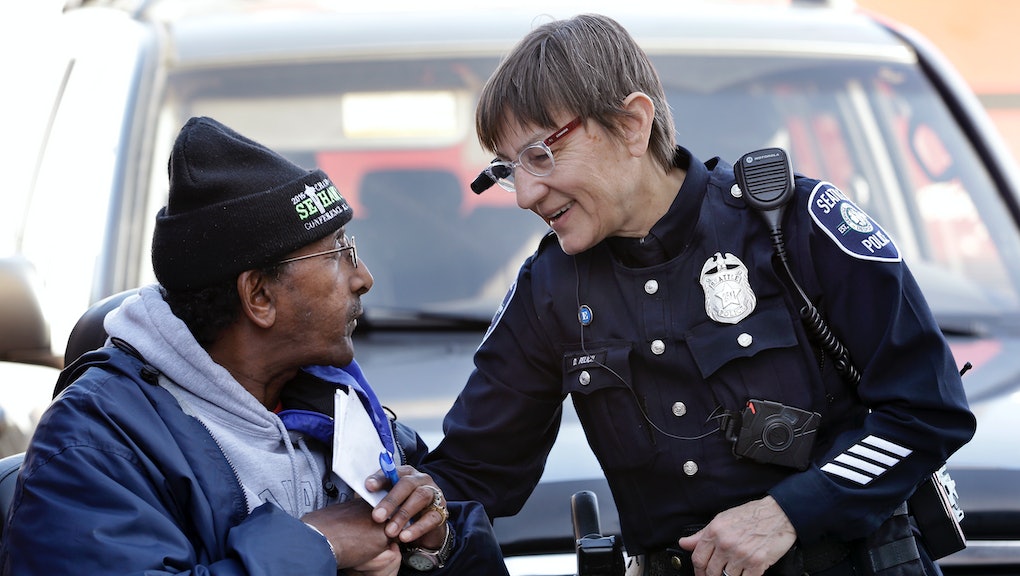 The camera never lies, and neither do the numbers.

Since police officers began wearing body cameras in January 2014, the city of San Diego, California, has seen a massive change in the relationship between cops and residents — for the better.

According to a March 18 report from the Police Department for the City Council's Public Safety and Livable Neighborhoods Committee, from when the body cams first went into use through January 2015, complaints had fallen by 40.5% and the use of "personal body" force by officers was down 46.5%. The use of pepper spray dropped 30.5%, reports the Los Angeles Times.

"Body-worn camera technology is a win-win for both the officer and the community," Deputy Chief David Ramirez said in the report, which also noted that 600 officers currently use the cameras. The city plans to equip 1,000 officers with cameras by the end of 2015.

Body cameras are a no-brainer. Even before tragedies like that in Ferguson, the use of body cameras to increase police officers' transparency and accountability had produced spectacular results.  As Mic previously reported, the city of Rialto, California, had 70 police officers participate in a controlled study wearing small body cameras. The study found a whopping 88% reduction in complaints against officers and an almost 60% reduction in the use of force after the cameras were introduced.

The Rialto model was given a further boost after research by the University of Cambridge's Institute of Criminology found that the cameras induced "self-awareness" in both officers and suspects, which caused a significant fall-off in the use of unnecessary force.

An important conversation: In the wake of a series of racially charged incidents around the country between white officers and black men like in Ferguson, Missouri, and Staten Island, New York, the issue of body cameras has vaulted into public consciousness.

In 2014, President Barack Obama requested $263 million to provide cops with cameras and training, while police departments from Portland, Oregon, to Lowell, Arkansas, to Rome, New York, have taken steps to begin equipping their officers.

"On many levels it is an improvement," Detective Captain Tim Bates of the Rome Police Department told Mic. "I honesty cant think of any negatives that we've had."

Going forward. It's important to remember that body cameras are not a cure-all. Eric Garner, a black man from Staten Island, died in a police chokehold that was entirely captured on film. The officer in the case, Daniel Pantaleo, was ultimately not indicted in a move that sparked criticism from both Republicans and Democrats.

Over the long term, body cameras will almost certainly result in legal challenges over the privacy of the individuals in the footage, and raise questions surrounding whether or not the videos should become part of the public record. The North Dakota legislature has already taken steps to limit the public's ability to see body camera footage over these very concerns. Especially in charged cases, gutting public accountability would only exacerbate the problems that the cameras were designed to fix.

Truly tackling America's crisis in policing requires building trust and a sense of community between the police and communities they serve.

Still, we cannot let perfection be the enemy of the good. The remarkable results from San Diego and other cities cannot be denied. Body cameras have the potential to markedly reduce violence in every city where they are introduced and seem poised to usher in a new era of police accountability. That's something we can all be proud of.