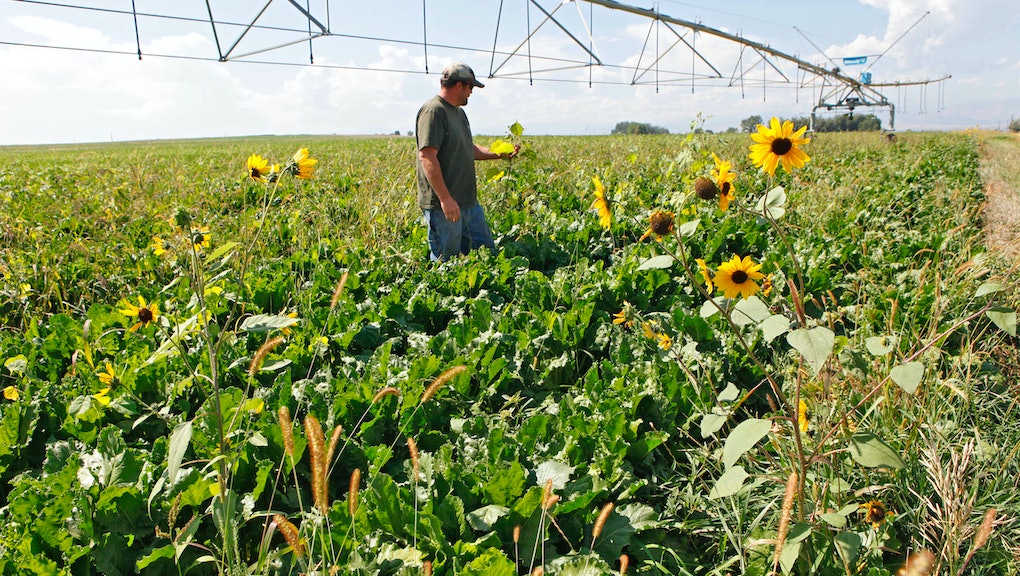 One of the world's most widely used agricultural chemicals is a "probable carcinogen," according to a new review of available scientific research from World Health Organization scientists.

The review, which was recently published in The Lancet: Oncology, looked at several studies on glyphosate. That's the active ingredient in Monsanto's flagship Roundup herbicide, which the Guardian reports is the most popular weed killer in the U.S. and likely the world.

If the findings are correct, then one of the most common chemicals in use in American agriculture could be putting countless people at risk of developing deadly cancers. Not only that, it's been happening for decades without anyone even realizing the true dangers.

The research: Though many countries' regulatory agencies, including the U.S.'s, don't consider glyphosate a carcinogen, the WHO and International Agency for Research on Cancer (IARC) examined a number of studies and found the chemical to be a "probable carcinogen" for both animals and humans — the second most serious categorization for this kind of thing.

The WHO/IARC review concluded the Roundup ingredient increased risk of multiple types of cancer in laboratory mice and non-Hodgkin lymphoma in humans. The review also noted evidence of "DNA and chromosomal damage in mammals" and in human and animal cells in certain laboratory conditions. On top of that, another study the team reviewed found evidence of chromosomal damage in the blood of people living near areas where the herbicide was used.

Because cellular DNA damage and cell failure can lead to cancer, these kinds of results are, to say the least, alarming.

How real is this? Professor Regina Santella of Columbia University's Mailman School of Public Health told Mic that though the data was "not completely consistent," the WHO made a convincing case about glyphosate's unrecognized danger, especially since the WHO team analyzed various studies and were able to independently judge the quality of each paper.

"There's several case-controlled studies all leading to reported increased risk of non-Hodgkin lymphoma," Santella told Mic. "That's something to be worried about."

Millions at risk: As Mother Jones notes, Monsanto has been denying glyphosate's negative effects on human health for years. However, since 1974, when the chemical went into use, we now know millions of agricultural workers have been exposed to carcinogens because of RoundUp's widespread use. The substance has additionally been detected in the environment in high-use areas.

The workers spraying the herbicide are most at risk, but many others who have had less direct contact with glyphosate may be at risk as well.

"Toxicity always is related to dose, and so the risk is going to vary, with the highest risk being those who were actually involved in the application," Santella told Mic. But "given that they see some more general exposure to the population, you worry about the range of susceptibility in the population."

Glyphosate is big business for Monsanto. Bloomberg reports that the agricultural giant's "$15.9 billion of annual sales are closely tied to glyphosate," since "most of the company's crops are designed to be used in tandem with it." Monsanto's herbicide division grew by 13% in 2014, thanks in large part to genetic engineering techniques immunizing crops like corn, soy and cotton to glyphosate in order to allow farmers to spray more of it.

Monsanto vice president for global regulatory affairs Philip Miller told Bloomberg that the company was confused how the WHO could have reached conclusions at odds with prior research, calling the new review "a dramatic departure from the conclusion reached by all regulatory agencies around the globe."

According to Santella, the research "suggests that we really need to be much more careful in terms of its regulation" and "possibly even phase it out."

With such big business interests at play, it's likely going to take further studies and critical analysis to convince a corporation as big as Monsanto to restructure such a major chunk of its business. But considering WHO's findings, something needs to change, and it needs to change soon.