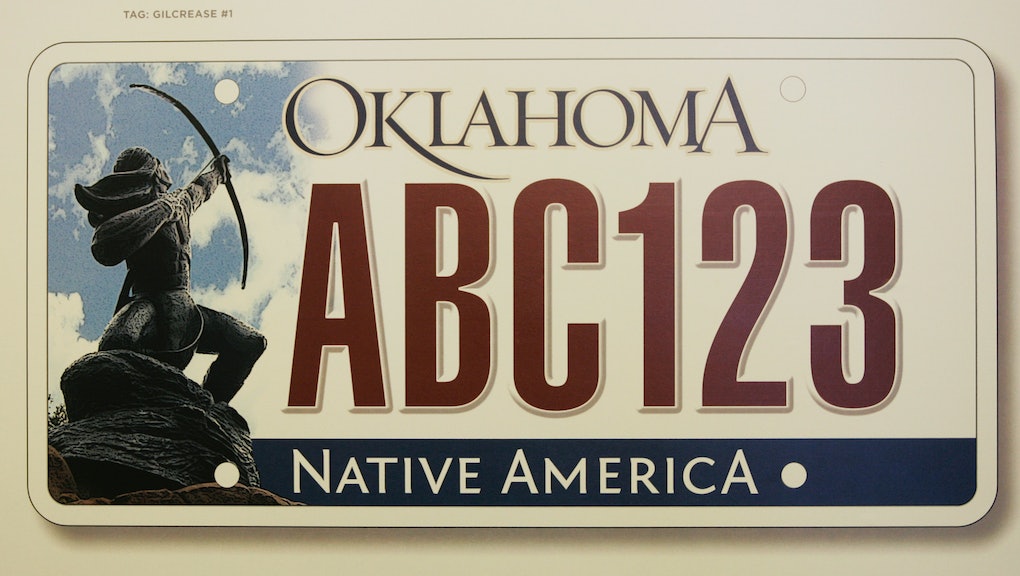 Vanity plates come in all stripes: odes to sports teams, appreciative messages for family members, love notes for cherished pets. But one Oklahoma man recently discovered the hard way that not all plates are created equal — particularly when they carry pro-LGBT messages.

Local news station KOCO reports that Edmond, Oklahoma, resident John Patrick Keefe II's request for a personalized license plate reading "LGBTALY" was denied because it was "sexual in nature." Though Keefe is heterosexual, he put in an application for the plate because he wanted to show his support for the LGBT community; his sister Kimberly is gay, as are many of his friends.

"This is not sexual in nature," Keefe told Mic by phone from his office in Oklahoma City. "This is not something bad. This is OK."

He added that he received a rejection from the Oklahoma Tax Commission, which handles the requests, shortly after he submitted his application in December. "It gave a very generic list of reasons," he said. "So I called, and I was like, 'Well, what specifically was it?' And they said, 'Well, it's sexual in nature.' I said, 'You're kidding.' Sexual in nature? 'LGBTALY?' Sexual in nature, I mean, really?"

Fighting back: Keefe, a certified minister who also presides over same-sex weddings, vowed to appeal, and hired a lawyer to help him fight the case.

"I hired Charles Broadway," he told Mic. "He's very conservative, on the total end of the spectrum. And I knew that when I hired him. I wanted to be able to reach out across to the other side."

Broadway himself has said that he doesn't necessarily believe the rejection was rooted in discrimination — positing instead that the state is merely ignorant of the phrase's "social/political connotation" — but Keefe was adamant that the agency's rejection was unfair.

"I would like to see some meaningful change take place, and for [the LGBT community] to be able to have equality and to be able to share in the pursuit of happiness," he said. "That's just what we're after."

The tax commission, for its part, declined to comment on Keefe's specific complaint, telling Mic that the department couldn't comment because of privacy issues. However, Paula Ross, the agency's director of communications, said that "LGBT" wasn't listed as a banned phrase, and added that a rejected applicant could request a hearing to review the decision.

Oklahoma has a rocky history with LGBT rights. In 2004, 76% of the state's residents voted in favor of Question 711, an amendment banning same-sex marriage.

In January 2014, however, after an extended court battle, U.S. District Judge Terence Kern overturned the ban. In his decision, he called Question 711 "an arbitrary, irrational exclusion of just one class of Oklahoma citizens from a governmental benefit." After the Supreme Court decided against hearing Oklahoma's appeal, courthouses in the Sooner State began issuing same-sex marriage licenses.

Despite its relative progressiveness when it comes to marriage equality, however, the state doesn't have a fantastic track record where anti-discrimination laws are concerned; it has no laws in place to protect against employment discrimination, nor does it have laws on the books that address sexual orientation-based crimes.

The license plate example sets a bad precedent. At the end of the day, Keefe is simply an ally. If even he can't express his unwavering support — he told Mic that he's a sperm donor with "29 little donor kiddos" and "really close ties with the LGBT community" — that doesn't bode well for actual members of the community. If the state is telling Keefe he can't show his support for the LGBT community, others may soon start to feel similar backlash if they try to show their support for equal rights for LGBT people.

The rejection is also questionable when one considers the kinds of plates that do make it through the system. According to Keefe, plates that express pro-life support or support for religion are valid. "The stuff that they sanction," he told Mic, "[is] just as long as the older, white, conservative, Christian majority thinks it's fine."

He plans on taking the rejection all the way to the top — he told the Oklahoman that he's "prepared to go to the state Supreme Court" — because the LGBT community is entitled to inclusion, just like any other group.