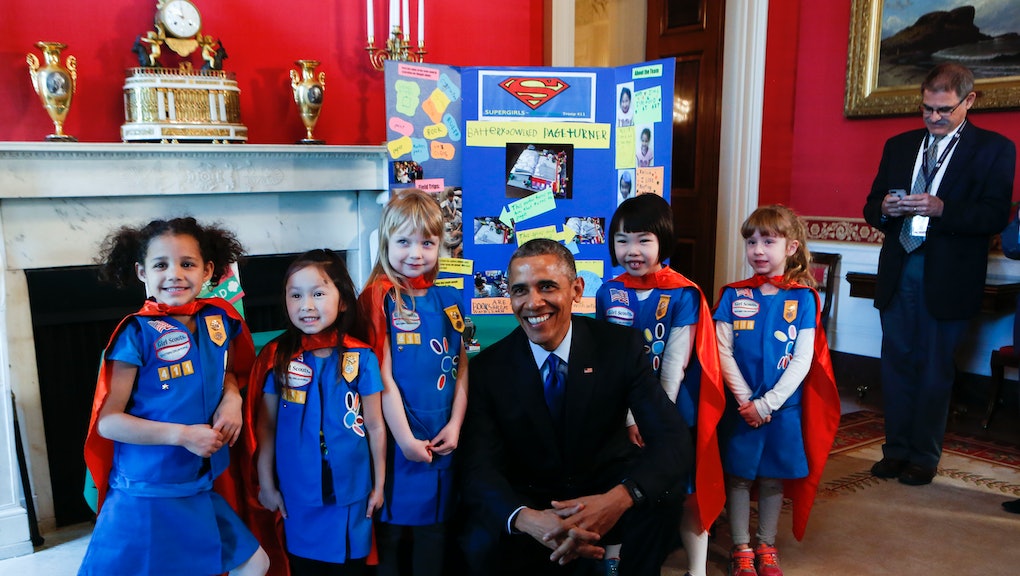 Every cool invention starts as a little idea.

The concept, troop leader Suzanne Dodson told Tulsa World, was inspired by a conversation with their librarian and one girl's observation that people with diseases like arthritis may benefit from the added help.

President Obama asked the inventors to describe their invention, which one team member admitted was still a "prototype" born from a successful "brainstorming session."

"Have you ever had a brainstorming session yourself?" Cheng then asked the president.

"I have had a couple of brainstorming sessions, but I didn't come up with anything this good," Obama replied, including "you know ... health care."

The troop was the youngest team at the fair, according to Tulsa World — an important reflection of the profile of girls interested in science, technology, engineering and math fields. Studies show that seven out of 10 young girls are interested in STEM, but only two in 10 end up pursuing careers in those fields, according to Microsoft. This has led to an overarching decline in women entering STEM fields, despite the fact that these fields are expected to quickly become the most lucrative and in-demand professions, according to USA Today.

"It really is a problem with girls, when they get to middle school, they lose confidence in their own ability to succeed in STEM," Suzanne Dodson told Tulsa World. "Having this experience at [a] young age really gives them a confidence boost."

As Obama told science fair attendees, according to NBC, "It's not enough for our country just to be proud of you. We've also got to support you." Let's hope his sentiments extend beyond supporting STEM initiatives generally, and specifically encourages young girls — like those of Troop 411 — to enter a promising field.