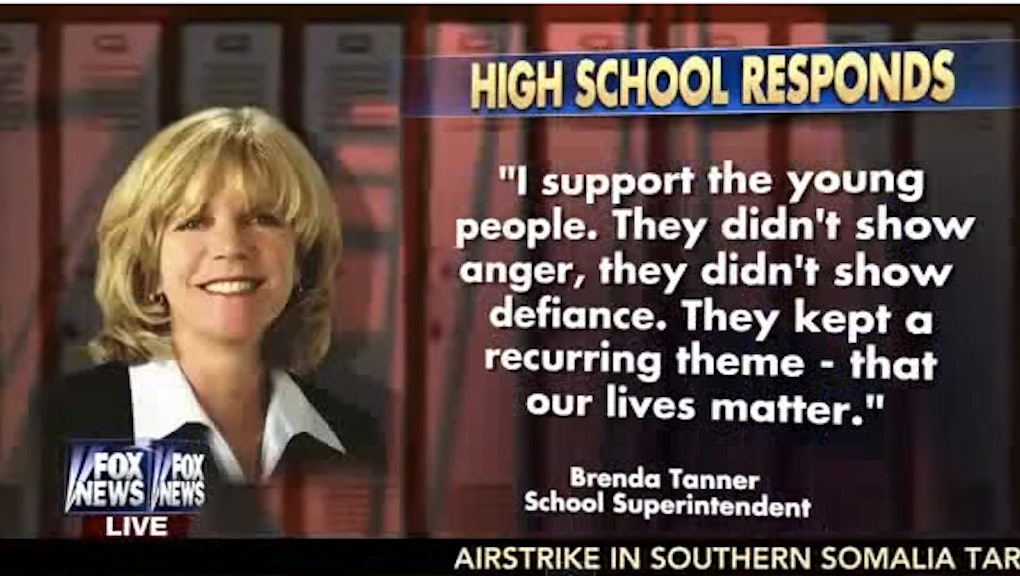 Unwanted education: Rebecca told Hasselbeck that she recently attended a districtwide Black History Month event, where her 8-year-old daughter was slated to sing a medley of Motown songs with a choir. But, immediately upon her arrival, Rebecca says she was shocked and dismayed by the hard "anti-police" sentiment around her, evidenced by local black high school students wearing t-shirts that read "I Can't Breathe," and performances listed in the program with offensive titles like, "Hands Up, Don't Shoot" and "Black Lives Matter."

"Students started coming out on stage saying things like, 'I'm from Ferguson, Missouri. I was told to put my hands up. I did and I was shot seven times. My name is Michael Brown,'" Rebecca said.

Now, Rebecca and Deputy Sheriff Charles want a proper apology — and Hasselbeck is seeing to it that they get it — for having to explain an educational moment to their daughter. "A lot of students walked away with questions," Deputy Sheriff Charles told Hasselbeck. "My daughter had some very serious questions: 'Why do cops shoot black people? Why do cops shoot good people?' ... It really took me off guard, and we really had to have a discussion with our daughter in great detail about current events we should've never had to have."

The school's response: School Superintendent Brenda Tanner told Fox & Friends that the event served to show that "our lives matter." The inclusive pronoun, "our," is a nod to solidarity and the fact that everyone — white, black, brown and all colors in between — is affected by discussions about race.

But Tanner's statement wasn't enough for Rebecca and Deputy Sheriff Charles. According to them parents shouldn't have to talk about race with their children. Especially the white ones!

Hasselbeck agreed with the parents, surmising that the "content is not something" Rebecca would "want [her daughter] to be a part of." She has a point; it's not like schools are intended to foster intellectual growth or nurture empathetic, civic-minded citizens or anything. And schools like the one Rebecca and Charles' daughter attends certainly shouldn't teach black history any other way than white people intended — like by singing a "Motown Medley."