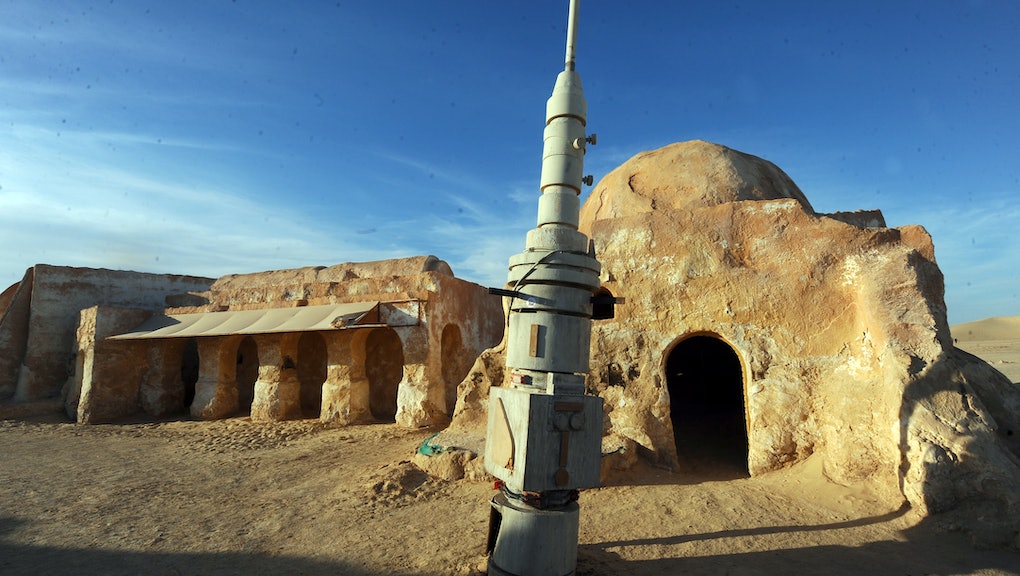 Watch out, Star Wars fans: the Islamic State has taken up a presence in Tatooine.

No, that's not a story from the Onion. CNN reports that the Tunisian village of Tataouine, whose name inspired that of Anakin Skywalker's home planet, has become a "way station for jihadists" crossing the border into war-torn Libya around 60 miles to the east.

The Star Wars connection: Tataouine wasn't specifically used as a filming location for any of the Star Wars movies. But StarWars.com's Sander De Lange writes that it is just a 20- to 30-minute drive from Ksar Ouled Soltane, a fortified granary that was used as a set for the slave quarters that Anakin Skywalker and his mother Shmi resided at in The Phantom Menace. It's also just a 45-minute drive from Medenine, another village which was used as part of their neighborhood.

The video below shows Ksar Ouled Soltane, which Atlas Obscura notes was built by the Berber people in the 15th century. The fortified buildings, called ghorfas, originally stored harvested grain and were designed to "remain cool during arid weather near the Sahara Desert" and protect locals against raids.

Other Star Wars sets remain abandoned throughout Tunisia, sometimes in rural locations. The iconic Lars homestead, where Luke Skywalker was raised by his Uncle Owen, and Aunt Beru, is located roughly 20 miles out of Tozeur at Chott el Jerid in the middle of a salt lake flat and was restored by fans in 2012.

The Islamic State connection: While Star Wars fans sometimes journey to the region around Tataouine to visit the various places where scenes in the franchise were filmed, the British government recently issued an advisory telling its citizens to avoid entering Tunisia thanks to a "high threat from terrorism, including kidnappings" and possible "indiscriminate" targeting of places frequented by foreigners.

While the United States has issued no such advisory, the State Department nonetheless urges visitors that "terrorism remains a significant concern" and that tourists should "maintain a high level of vigilance."

According to CNN, three suspected Islamic State wannabes were arrested in the region near Tataouine earlier this month. They allegedly tried to cross the border to join the burgeoning Islamic State movement there, which has seized major oilfields in Libya in recent weeks. On March 18, Tunisians trained by Islamic State in Libya launched a terrorist attack on Tunisia's famous Bardo Museum that killed 23 people.

How bad is the situation? CNN reports that the Tunisian border with Libya, which has remained chaotic since the assassination of former leader Moammar Ghadhafi in 2011 amid a violent revolution, now has a 1.8-mile "no-go zone" with "fortified positions every couple of miles" and a much larger 12-mile buffer zone in which citizens are expected to only go with official permission. Still, it appeared that local forces lacked the manpower or equipment to adequately seal the 380-mile border.

The Tunisian government, one of the only apparently stable democratic states to emerge from the Arab Spring, has good reason to be concerned. Last year, the Washington Post reported that over 3,000 Tunisians had joined the Islamic State in Syria, while the New York Times referred to Tunisia as the single largest source of Islamic State recruits from foreign nations.The growing Islamic State enclave in Libya is a bad omen for Tunisia, since it provides a much closer venue for radically-inclined Tunisians to receive training and support than Iraq or Syria.

Tunisia is also vulnerable to Islamic State encroachment because of its tourism-heavy economy, which had just been on the verge of reaching its pre-revolution total of 7 million annual tourists before the Bardo Museum attack. Skittish tourists — and their money — could rapidly abandon Tunisia's many hotels and beachfronts if the country is perceived to be increasingly dangerous to visit.

With problems like these, what happens to Star Wars sets are probably the least of Tunisia's concerns. But with the security situation across the country worsening, fans of Luke Skywalker will be among the many worried onlookers hoping that Tunisia avoids the same kind of chaos that has afflicted many of its neighbors.