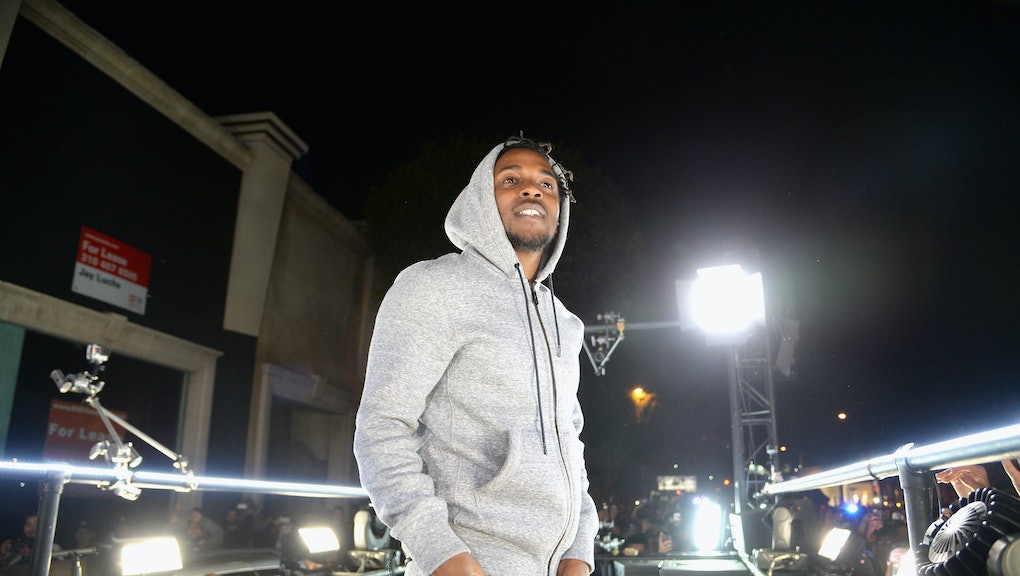 Kendrick Lamar Just Shut Down the Streets of L.A. for an Epic Surprise Performance

Last week, Kendrick Lamar took the hip-hop community by storm, accidentally dropping his already legendary To Pimp A Butterfly a week early. Tuesday night, he continued that momentum in one of the most unexpectedly awesome ways possible.

Rocking a grey sweatsuit and some fresh Reebok sneakers, Kendrick performed a mobile concert on the back of a flatbed truck. This is how you promote an album:

Not long before, the rapper tweeted out a cryptic invitation, telling people to meet him at an empty lot off West Hollywood's Sunset Strip.

When people arrived, they found Kendrick mounted on a mobile stage that proceed to drive onto the strip followed by a mob of running, screaming, dancing fans. The promenade drove for a full five kilometers, clocking a speed of about 10 miles per hour, as estimated by Noisey, culminating at the second tweeted address.

The performance was pulled off in collaboration with Reebok's #GetPumped campaign to get people hyped about the company's new the ZPump shoe.

"It was surreal to see Kendrick shut down the LA streets with Reebok," Marcus Troy, lifestyle blogger and web entrepreneur, told Mic via Twitter, calling it a "you had to be there type of experience."

Kendrick kicked off the run with a performance of "Money Trees" from good kid m.A.A.d. City. He embellished the song with breaks and some live guitar riffs. He also ran through a bunch of songs off his old album and the new To Pimp A Butterfly, as well as a cover of Tupac's "Hail Mary," once again helping to keep Tupac's spirit alive.

"As a boy Kendrick would speak of how Tupac inspired him to be the man he is now," spectator Joseph Hernandez wrote Mic via Twitter. "And now in my youth to see him roll through the Hollywood Streets and seeing a crowd of people following him behind and making a difference in the community is a inspiration to me and many others."

The event only adds to the ravenous excitement Kendrick has drummed up around To Pimp A Butterfly. It proves the rapper is committed not only to revolutionizing recorded hip-hop, but also to do the same for live hip-hop. He's gone out of his way to include live musicians in his recording and television appearances: Saxophonist Terrace Martin and bassist Thundercat supported him on a performance of an untitled track as one of the The Colbert Report's final musical guests.

Kendrick Lamar will no doubt bring this same energy to his festival tour dates this summer, where he's set to headline San Francisco's Outside Lands, Milwaukee's Summerfest and Washington state's Sasquatch!.