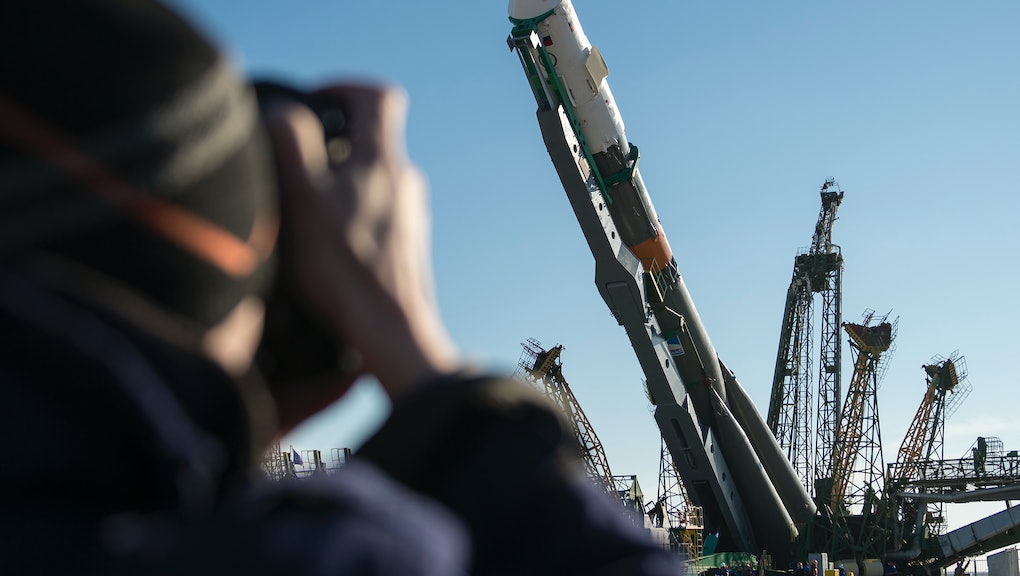 History will be made on Friday when American astronaut Scott Kelly and Russian cosmonaut Mikhail Kornienko embark on the first near-yearlong mission to the International Space Station.

Kelly and Kornienko will spend 342 days total on the ISS, going through a gauntlet of tests to learn more about how the human body, both mental and physical, deals with the stresses of space, ultimately to determine how much space flight humans can really sustain.

"NASA's goal right now is to go to Mars," Daniel Huot, NASA Public Affairs Officer, told Mic. "But there's a lot of know-how you need to do that safely and effectively. Typically astronauts are [at the ISS] for six months. But with Mars, you're talking 500-plus days — majorly long timelines."

The background: Up to this point, most excursions to the space station only last half a year — doable, when you can just think about them as a long work trip.

In the history of space travel, only three Russian cosmonauts, running missions to the Mir Space Station between 1986 and 1995, have been in space longer than a year, and the findings of those missions left a lot of unanswered questions.

"They weren't doing nearly as much data and experience research as we are today," Huot told Mic. "The two going up there will participate in hundreds of different experiments."

The mind: They'll be paying special attention to the "third-quarter phenomenon," which is when astronauts start to buckle under the stress of knowing there's an entire quarter mission left. In the past, at least three Russian missions had to be aborted because of cosmonaut psychological issues.

The body: After a year in space without gravity, internal organs function differently, muscles aren't worked as hard and bodies aren't perpetually pushed into the ground. Bodily fluids are no longer falling downward, and your blood gets redistributed throughout the body, which is why, when you see videos of astronauts who've been in space a while, their faces appear puffier or wrinkles seem to have disappeared. Some astronauts even complain about blurred vision when they return from shuttle missions, which, after long periods of time, might not be reversible.

The most alarming issue, for which NASA runs frequent field tests, is how the body reacts to returning to an environment with gravity. When astronauts return home, they often need to be carried since their bodies have a hard time going from microgravity to Earth gravity. On Mars, even though the gravity isn't as strong, it still poses a problem, especially for any surface activity.

"Say you need to be able to set up a [Mars surface] habitat or go on a space walk," Huot says. "In field tests, when astronauts come back, we make them walk in straight lines or lie on the ground and stand up. It's difficult to do these tasks. It's very basic, but potentially lifesaving."

Twin-testing: What makes this mission so unique is how NASA plans to observe effects on Kelly, even when he's miles away. Kelly has a twin brother, named Mark, who is also an astronaut. It's the first time in history an identical twin has been used to test for possible outcomes of someone in orbit, provided with the convenience of being on the ground.

"This is a chance to use two people who are essentially identical, to do research on a much smaller molecular level," Huot says. "And Scott's twin Mark was a spaceship commander so we still have data on him from his past flights."

Throughout the near-yearlong trip, the ISS will see a rotating cast of characters: Russians, Europeans, an opera singer (civilian participants with the money to pay for a seat aren't uncommon) and another American. They'll all be interacting in close quarters to learn what it means to make humans tick in space. All of the involved space programs are sharing their research in order to move the program forward.

"One thing we talk about is how different space travel can be and how important it is to build these partnerships," Huot told Mic. "One day, a multinational mission to Mars could happen. Everything is pointing toward that right now."