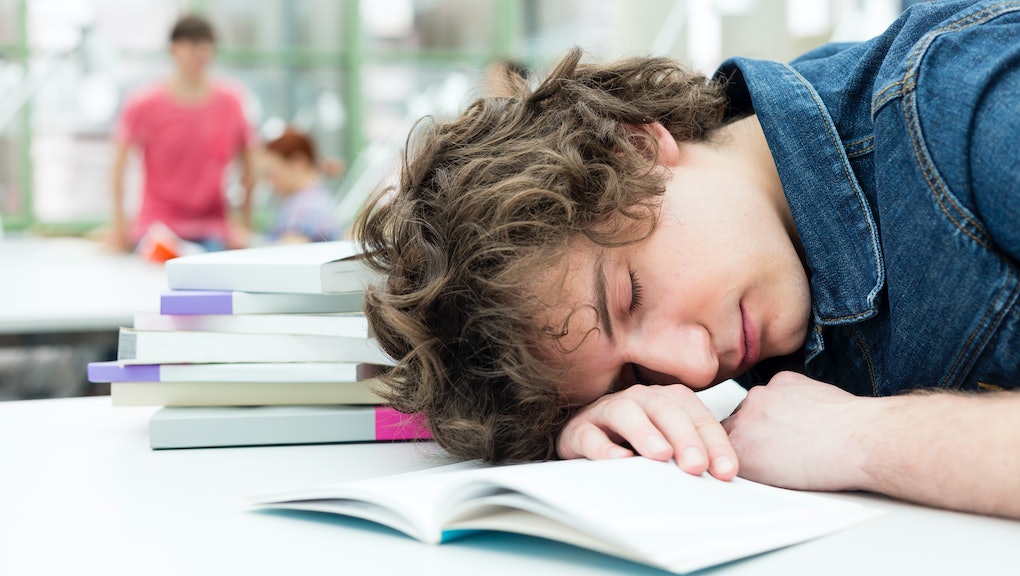 Catnap. Siesta. Snooze. No matter what you call it, catching a few winks while the sun still shines is doubtlessly an enjoyable way to pass part of your day. But is it a good idea?

It's a great idea.

According to a new study from Saarland University's Experimental Neuropsychology Unit in Germany, published in the journal Neurobiology of Learning and Memory, a 45-minute nap was found to help volunteers improve cognitive skills. Specifically, they were completing a word-memory test at a much better grade than their wakeful counterparts.

The science: To gauge the effects of a nice, relaxing nap on the human brain, Medical News Today reports study lead Axel Mecklinger and his research team asked 41 volunteers to memorize 90 single words and 120 random word pairs before taking a memory test.

The researchers then had half those people take a 90-minute nap, while the other half watched a movie to pass the time. Afterwards, everyone retook the memory test. While both groups did worse than before, those who napped for 45 to 60 minutes performed much better than the non-sleepers, almost as well as they did during their first memory test attempt.

The researchers had the napping group wear an electroencephalogram (EEG) to measure their brain activity while they slept and found an increase in the number of "sleep spindles," which Medical News Today describes as "[bursts] of activity in the hippocampus region that plays a key role in memory consolidation."

From this, the researchers concluded there was a "selective beneficial impact of naps on hippocampus-dependent memories," or in other words, short naps helped the participants retain associative memories (those concerning links between otherwise unrelated items) at a significantly improved rate.

In a statement, Mecklinger said that the results suggested that a 45 to 60 minute nap "produces a five-fold improvement in information retrieval from memory."

Why you should care: The results on their own aren't enough to prove napping will turn you into a well-rested Einstein. As the NHS notes, the sample size was small and the results were just shy of statistical significance (proving the differences weren't due to chance).

But the research is yet another piece of evidence challenging associations of napping with idleness, laziness and sloth. Despite a well-ingrained stigma against napping by employers and others, evidence is consistently emerging that taking a light siesta is good for both productivity and physical and mental health.

"The role of sleep overall, and napping in particular, is still being clarified, but there is increasing evidence that many forms of memory depend on sleep," clinical neurologist Dr. Carl W. Bazil, director of the of epilepsy and sleep centers at the Columbia University Medical Center, told Mic via email. "This study certainly adds to that information."

While Bazil cautioned that it's not yet clear whether napping "completely overcomes" a lack of sleep or could replace it, "this study is encouraging for people who have the time to nap, particularly those who need to make up for lost overnight sleep due to work schedules or young children."

Considering that almost a third of employees admit to sleeping on the job or becoming very tired while working, it might be time to start rethinking the way Americans approach napping. Short bursts of midday sleep taken at appropriate times might be a good way for workers, caretakers and others to regain some much-needed energy. And as any experienced napper can tell you, it feels good, too.