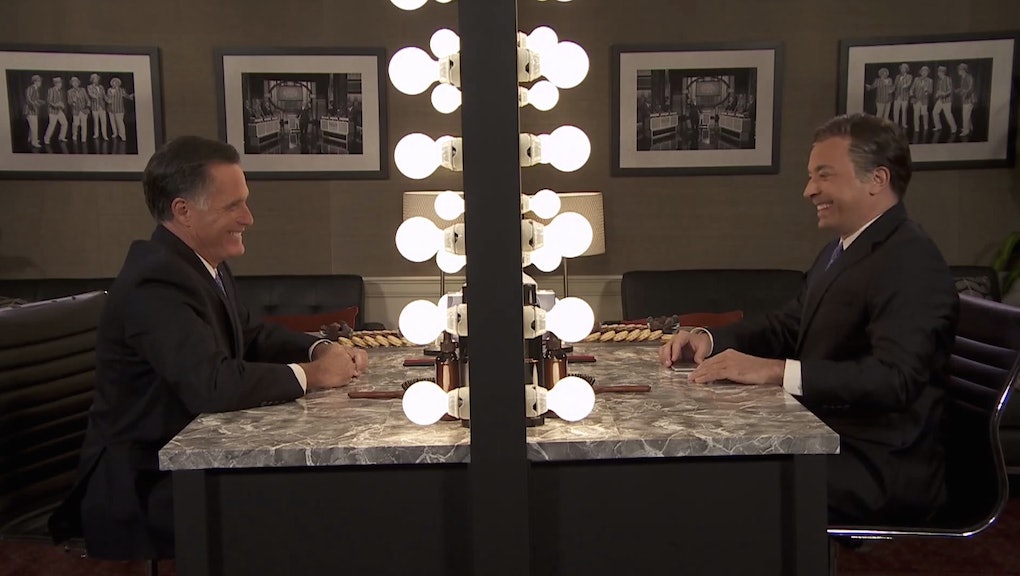 A good late-night show appearance for a politician allows them to poke a little fun at themselves and a little more at their opponents. For a twice-losing presidential candidate known for being stiff and elitist, that script should be flipped — and that's exactly what Mitt Romney did on Wednesday night's The Tonight Show Starring Jimmy Fallon.

The segment, in which Fallon dresses up as Romney's mirror image, is a pretty delightful appearance for the oft-robotic Republican. More than that, it showed how a silly media appearance can benefit a politician in a way it doesn't do the president any favors.

When Fallon's Romney drag was revealed, the effect was pretty impressive:

But beyond that initial sight gag, most of the laughs in the segment belonged to the first-edition Romney himself. From poking fun at his humorless nature...

...to lamenting the departure of Zayn Malik from One Direction — and laying the blame at the foot of our commander in chief...

...and remaining stone-faced in the face of his mirror image's invitation to dance:

Romney's the right man to play the clown. Unlike President Barack Obama, who brings an air of inelegance to the presidency every time he picks up a selfie stick or reads mean tweets, Romney has a reputation that fits doing a silly media stop. He can only stand to benefit from being more human, and he doesn't have to worry about electability since announcing he's not running a third time.

However, Romney can still work as a GOP leader from his perch. Media appearances like this — in which he got a fair number of shots on Obama as well as himself — allow him to discuss ideas and issues in America without appearing too serious or politically motivated. It's a savvy move for the Republican party, and if it allows us to see more of a lighter, funnier Romney, it's a winning move for late-night audiences as well.