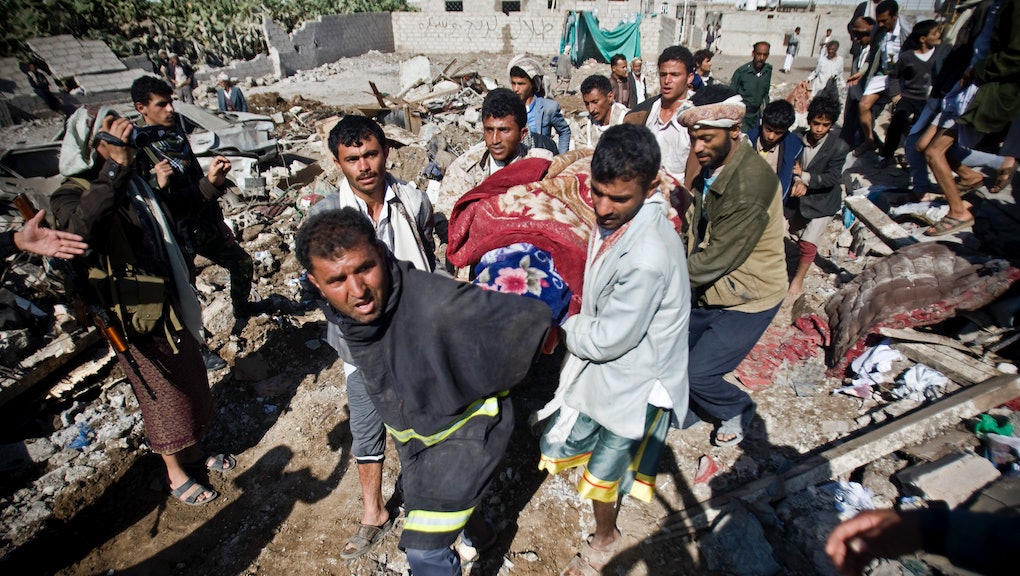 The conflict in Yemen has escalated — and it's not looking good.

Late Wednesday night, Saudi Arabia began an aggressive airstrike against Yemen in an effort to combat Houthi militia, the Shiite rebels who have taken over the country.

The airstrikes were prompted by events earlier in the day, when Houthi rebels enclosed Aden, Yemen's economic hub. A 10-country coalition, backed by the U.S., quickly formed on Wednesday evening to support Saudi Arabia before the military offensive began. Allies assisted in the overnight airstrikes, which devastated parts of the capital, Sanaa.

Before the airstrikes were initiated, the White House announced that it is "establishing a Joint Planning Cell with Saudi Arabia to coordinate U.S. military and intelligence support."

This is not a one-country conflict. The ongoing acrimony between warring factions in the region has propelled Yemen's civil unrest into becoming an international conflict. Both Saudi Arabia and Iran, whose government supports the Houthi rebels, are emerging to be key players. Iran has condemned the Saudi Arabian attacks on Yemen.

The U.S. could play a bigger role, too, after Houthi militia stole classified documents from Yemen's National Security Bureau in the capital, Sanaa. The documents expose "names of confidential informants and plans for U.S.-backed counter-terrorism strikes", according to the LA Times, which could have serious implications in potentially undermining major intelligence operations in Yemen.

Yemen's civil war is a perfect opportunity for America to clarify its role in the Middle East. It might seem that the U.S. and Houthi rebels would have common interests based on a shared foe, Islamic State, but the opposition between the two groups is too great to allow this to happen anytime soon.

With each military intervention in the Middle East, the stakes appear to get higher, and America's involvement here has very real implications. The U.S. is trying to negotiate a nuclear deal with Iran, quell Islamic State, prevent crude oil prices from soaring and keep its Middle Eastern allies happy. As the situation becomes increasingly complex and more factors begin to intertwine themselves, the U.S. will need to be careful to handle themselves correctly in an upcoming conflict that will likely shape the political future of this uncertain region.

Yemen's upheaval is unusual in that it's created an explicit sectarian conflict with major players. Countries like Iran and Saudi Arabia have offered financial and logistical support to militia, from Islamic State to Houthi. This is nothing new. But historically, such assistance has been under the table. It will be fascinating to see which side prevails in this brewing war because it will invariably shift the power dynamics of such a significant region.