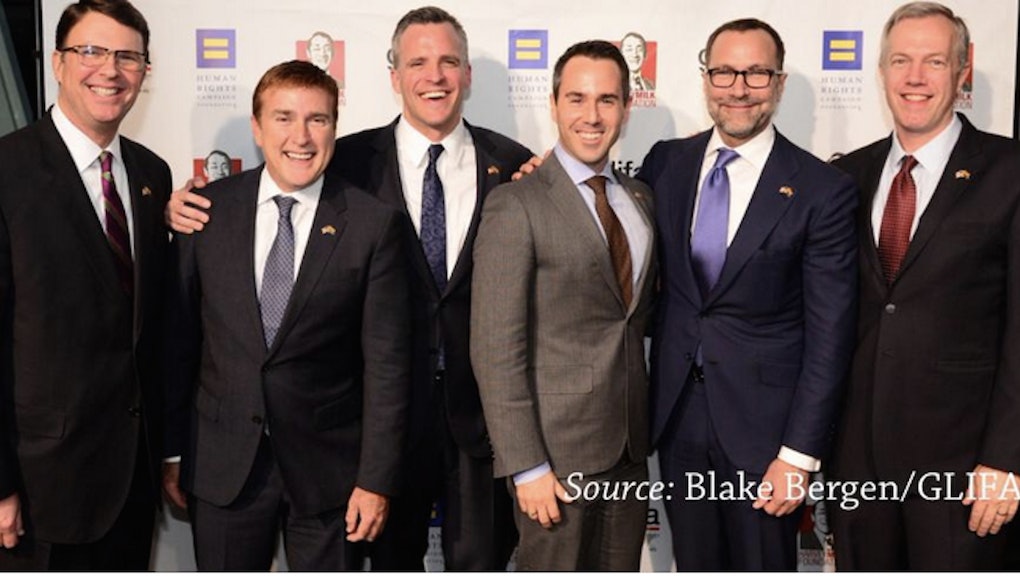 This Photo Represents a Major Problem in the LGBT Rights Movement

Last week, the six openly gay U.S. ambassadors posed together before a panel at the Newseum in Washington, D.C. Media outlets proclaimed that there's "no clearer sign of our progress" in response, while diplomats like U.S. Ambassador to the U.N. Samantha Power tweeted, "There was a time when you could be thrown out of the Foreign Service for being gay. Today, U.S. diplomats defend #LGBT rights around the world."

But some within the LGBT community saw the photo and thought something else entirely — that it represents a cold, hard truth about the gay rights movement: It's run by wealthy, white men.

White. Male. This is the face that has historically led the LGBT movement's most prominent organizations, from political organizations to nonprofits. The focus of the "gay agenda" for the past 30 years reveals the most about the uniformity of those at the top, as they pursue acceptance into two of America's most traditional institutions, the military and marriage.

But while gay marriage bans are falling across the nation, the Employment Non-Discrimination Act, which would make it illegal to discriminate against employees on the basis of their sexual orientation or gender identity, has repeatedly died in Congress over the last four decades. Government has also inadequately addressed persistent problems such as housing discrimination, youth homelessness, high rates of HIV and gender-based violence. This lack of attention is arguably no coincidence, given that these issues often disproportionately affect people of color, and as such are not as deeply felt by the leaders of this community.

That is why it is not necessarily cause to celebrate when all six of the openly gay ambassadors are cisgender white men. They represent a facet of Gay Inc., or the narrow field of white men who run the LGBT movement.

What's more, one recurring theme with ambassadorships is that wealth and political clout may trump expertise or even familiarity with a country when it comes to the foreign service. Some of these men — Ambassador to Spain and Andorra James Costos, Ambassador to Denmark Rufus Gifford and Ambassador to the Dominican Republic James Brewster in particular — have raised significant funds for President Barack Obama's election campaigns, as the Washington Blade reports. This is likely why even when members of a minority group (in this case, LGBT Americans) are invited into the fold of American policy and government, those individuals tend to look like most of the people who have already been in power.

Some real progress: The Victory Fund, an organization that helps LGBT politicians win office, named political activist and media commentator Aisha Moodie-Mills as its new president and CEO last week. She's the organization's first black and first female leader, one of the few non-white, non-male people to take the helm of a major LGBT group.

As she told BuzzFeed News, her election was born out of a true desire for progress in name of diversity: "I was impressed ... how they came to it themselves that they need to do something different and that they needed to think much longer into the future — a 20-year plan — and that this 20-year plan needs to reach people that they've never reached before."

White men running the show is not "progress." It's more of the same. But when its leaders better reflect the greater LGBT movement, whether they're appointed by members, nonprofit boards or the government, true equality can become attainable for everyone.