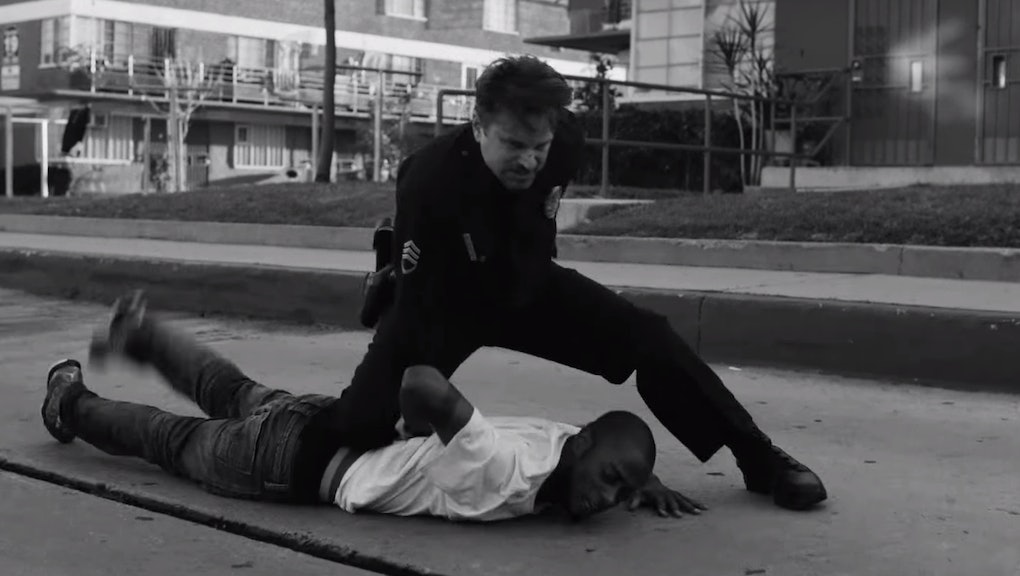 Run the Jewels 2 was one of the most politically radical and socially conscious musical statements of 2014. Five months since its release, it looks like the band isn't ready to stop. Early on Thursday, Run the Jewels released a new music video for their song "Close Your Eyes (And Count to F**k)" featuring Rage Against the Machine's Zack de la Rocha. It's a powerful dramatization of a violent struggle between a young black man and a white cop; the two fight for the whole music video. The message is clear: This senseless violence needs to end.

The two combatants look exhausted throughout the video, as if they've been fighting for days. Neither the cop nor the black man — unarmed, much like Michael Brown and Eric Garner before him — gain the upper hand. It ends in an uneasy stalemate.

"For me, it was important to write a story that didn't paint a simplistic portrait of the characters of the Cop and Kid," the video's director, A.G. Rojas, wrote in a statement accompanying the video. "They're not stereotypes. They're people — complex, real people and, as such, the power had to shift between them at certain points throughout the story. ... Our goal was to highlight the futility of the violence, not celebrate it."

This impression comes through in a powerful way.

This video is only the latest in a powerful string of statements Run the Jewels have made on police brutality.

Last year, the members of Run the Jewels were leaders in the conversations surrounding the deaths of Eric Garner and Michael Brown. Rapper Killer Mike wrote a long Instagram post expressing empathy for Brown's family and reasserting the seemingly overlooked humanity of black people. He also wrote a powerful op-ed on the conflict in Billboard.

"The police are paid by the public and carry a public trust, and they take an oath to protect us as citizens," he reminded America in his op-ed. "The police have lost sight of that and must be reminded that we pay them to protect us, not to simply engage and cage us. ... I will use my camera, my pen, my pad and my network to do my part, to make sure that Americans will no longer fear their government or its employees."

Run the Jewels has continued this legacy in a direct manner. Through their lyrics and videos they've proven to be a tremendous voice of reason through these tragedies. And they will likely continue to serve that role as they begin to put together Run the Jewels 3.