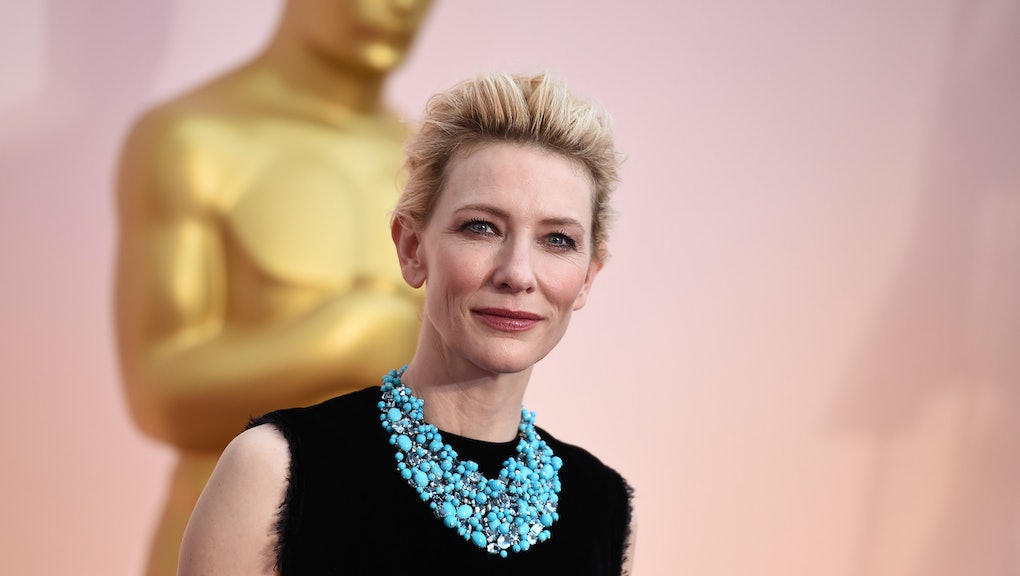 Cate Blanchett Has the Perfect Answer for Hollywood's Muting of Women

Cate Blanchett may be one of the world's most brilliant actors, but the two-time Academy Award actress knows how to throw down in the name of feminism.

While media outlets are still raving about her oddball Cinderella interview about sex and making vodka from cow's milk, her latest interview in Vogue Australia's April issue is more worthy of our attention. In the interview, the actress manages to succinctly take down both Hollywood sexism and ageism at once by pointing out that Hollywood needs to pay attention to "female audiences" of all ages for one simple reason:

Blanchett is right: For one thing, as the MPAA's 2013 Theatrical Market Statistics revealed, women go to the cinema more often than men, and purchase just as many tickets as men.

Blanchett attributes Hollywood's turn to more female-inclusive flicks to female audiences themselves — that is, the women who buy tickets. Money is power, and when the entertainment industry realizes that women consume more media (across the board) than men, according to a 2013 Nielsen report, it won't take long to appreciate their market value.

But Blanchett's statement goes further by aiming at people who think women no longer have worth once they stop being able to have children (as in, they're too old to be regarded as viable consumers). Alluding to Hollywood's ageist problem with women in her comment, she nails an issue within our culture wherein women seem to lose societal worth once they hit menopause — implying a woman's only value on Earth is to reproduce.

With celebrities currently flocking left and right to proclaim their feminism, it is refreshing to know that the fight for gender equality isn't something that's just trendy for Blanchett. Throughout her career she has used her moments in the media spotlight to call attention to sexist double standards against women everywhere, from media to politics. As she fantastically articulated in her 2014 Oscar speech, after winning the Best Actress award for Blue Jasmine:

"To those of us in the industry still foolishly clinging to the idea that films with women at the center are 'niche' experiences, they are not. Audiences want to see them, and in fact they earn money. The world is round, people!"

Blanchett knows that, in our celebrity-driven culture, she is in the unique position to have her voice heard and seems to be pursuing her career with a feminist conscience. While press for Cinderella is over, we can't wait to hear what she says next.