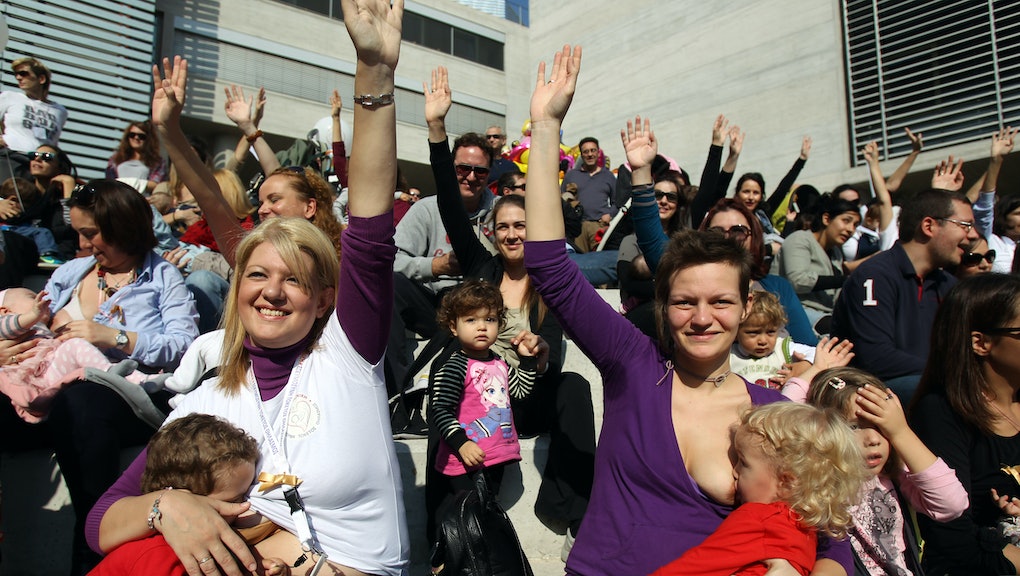 Some humans have the ability to provide nutrient-rich materials right from their bodies. No, not just poop. Breast milk.

There are plenty of immediate benefits for both the mother and child when it comes to nursing, but the advantages may also be long term. Most recently, a 30-year study of nearly 3,500 Brazilians claimed that people who were breast-fed longer showed greater economic success and higher IQ.

This is great. Everyone wants to raise the smartest, healthiest baby possible, and many women choose to breast-feed in hopes of developing a Baby Einstein (or with this study, Little Miss Moneybags). But in reality, breast-feeding is not physically or financially viable for all families, yet plenty of women are still shamed for not breast-feeding their children, as the inevitable so-called "mommy wars" come into play whenever a study like this brings up the benefits of breast-feeding.

It's a money matter: The study found the participants who were breast-fed for a year or more had IQ scores almost four points higher than those who were breast-fed for less than a month. Such findings highlight the importance of provisions in the Affordable Care Act that allow working mothers to take unpaid breaks to expel breast milk as necessary, and which mandate that employers have a non-bathroom space for midday nursing or pumping for a year after the employee gives birth.

But for working mothers particularly, a year of regular breaks throughout the work day often isn't an option, even if it's their legal right. In workplaces where parents fear job security simply for being a parent, taking breast-feeding breaks during a busy workday may seem impossible.

Nursing is a privilege: For lower-income mothers, many of whom are black and Latino, financial needs often mean a quicker return to work after maternity leave than mothers with more income or financial support, according to the Centers for Disease Control and Prevention. That means there's less time to breast-feed and bond with their kids at home. According to a 2012 Michigan State University study, less than 2% of low-income mothers breastfeed for a year, even if they had initially wanted to. For more affluent women, the rate was 50%.

What's more, while the American Academy of Pediatrics recommends breast-feeding over anything, African-American women are actually less likely to be encouraged to nurse their children by hospitals. According to a 2014 CDC study, maternity centers in areas with high concentrations of black people were less likely to encourage certain practices for parents, like prenatal nursing education, that ensure long-term breast-feeding. As a result, women of color and low-income women get shut out of the practices that set families up for regular nursing, regardless of the mother's work status.

As The Atlantic's Adrienne LaFrance points out, this class issue is made apparent in the study itself. The study began with about 6,000 babies in 1982, so only 59% of participants have followed up (or 68% if you don't count the participants who've died or lacked complete IQ or breast-feeding data). "Researchers tracked key socioeconomic markers — income levels, duration of schooling — that could also influence whether a person is findable for a follow-up. So, in theory, the breast-fed babies who wouldn't have ended up earning as much or performing as well on an IQ test could have been the ones lost to the study."

With all this time and few other points of data made available to researchers, who knows if breast-feeding itself is the reason these people have higher IQs? The Brazil study's authors even note that they could not evaluate maternal-infant bonding, the child's home environment or the intellectual stimulation of those breast-fed children, which are all factors that contribute to a person's long-term success.

A lot of parents don't or can't breast-feed for multiple reasons, and they shouldn't be told they're parenting wrong because of a study that doesn't really prove that much in the long run. As Jessica Valenti wrote regarding the opposition she has received from pro-nursing women,

"Why a woman doesn't nurse is beside the point. Whether she's unable to or simply chooses not to, the guilt has got to stop. we should reserve our motherly disdain for systemic issues that make parenting harder — workplace inequalities and the maternal wage gap, the lack of paid maternity leave and affordable childcare options — not other women's personal decisions about how to feed their babies."

What about adopted kids and male parents? Beyond chastising women who are financially unable to breast-feed, these conversations also tend to ignore the diversity of all families. Unless there are specific circumstances (like a transgender dad who births a child), most dads can't naturally breast-feed, for example. And now that breast-feeding has been heralded as a blanket solution for moms, what are dads or adoptive parents to do when it comes to feeding their children? Milk and formula tend to suffice, but even then, Similac, one of the leading formula providers, has been checked for using language that excludes fathers as being equal in parenting duties.

Other dads who have to deal with questions about how their children are fed? Humor may be the best way. Brent Almond with the Good Men Project says when he's asked whether his kids are breast-fed, he says he tells people, "We tried, but [our son] kept getting hair in his mouth."

Breast-feeding may not necessarily be a silver bullet to piles of money and a plethora of Ph.Ds. With demonstrations around the world calling for more fairness in allowing women to take breaks to nurse or pump breast milk, and a campaign to free the nipple, hopefully more people are understanding that while nursing can be a great choice, it's also a privilege for many. Perhaps it is, but as far as the results of this study go, the (peer review) jury should be out.