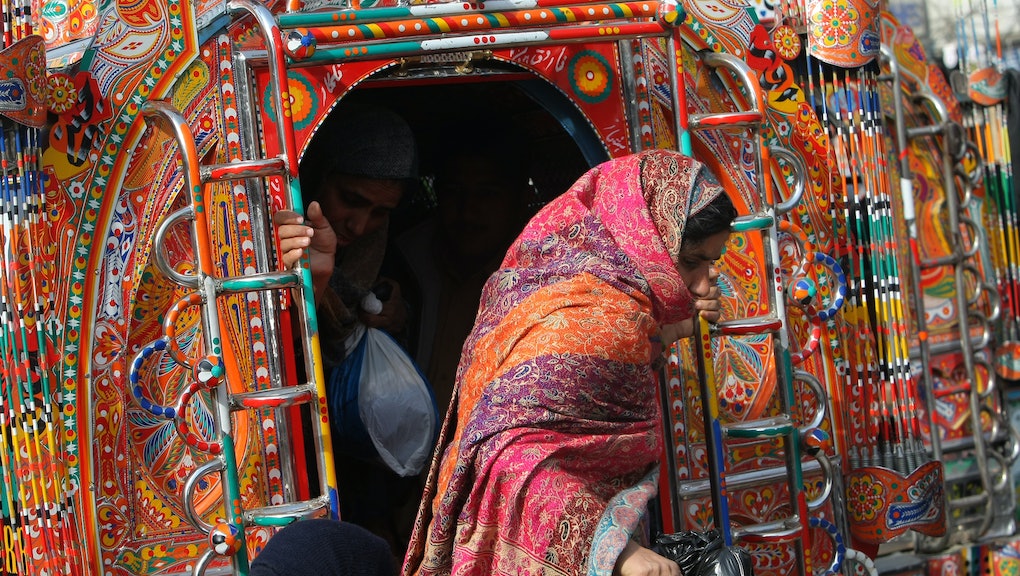 In Pakistan, where the rickshaw and taxi industries are aggressively dominated by men, one new government initiative in Lahore is working to bring women into the fray, providing both a new world of economic opportunities and a safe way for women to travel around the city.

The Pink Rickshaw service is a new provincial government service in which the Punjab government will provide a fleet of pink rickshaws exclusively for female passengers and female drivers.

The government launched the "Pink Rickshaw service in a bid to remove the cultural barriers for women, to provide new possibilities to generate revenue for their families," reported Saach TV, a Pakistani news organization.

A crowdfunding page for the initiative, which does not appear to be officially affiliated with the government, notes, "Many women do not enter the workforce or acquire education for lack of safe transportation." The hope is that Pink Rickshaws will help overcome this daily challenge.

Successful entrepreneur and self-described women's rights activist Mehrunissa Khan, who is a Lahori native, spoke with Mic about the program, saying, "This is absolutely amazing. It will make it more socially acceptable for women to get around and give them a lot more freedom."

Driving history in the right direction. Across much of Pakistan, poor women often don't have access to safe or reliable transport and they are regularly victims of harassment and abuse as a result.

The International Labor Organization (ILO) published a report on the absence of safe public transport in Pakistan and found the negative effect it has on women is "substantial." When it comes to gender equality overall, Pakistan ranked "124 out of 155 on Gender Development Index (2009) and 132 out of 134 on the Global Gender Gap Report (2009)." The report specifically noted that Pakistani women "have limited access to resources; restricted rights, limited mobility and somewhat muted voice in shaping decisions," making them "highly vulnerable."

But transportation issues are just part of the problem in the country's history of gender discrimination. Pakistan has a sizable reputation for curtailing women's rights. In 1979, religious zealot and dictator Mohammed Zia ul-Haq introduced the Hudood Ordinance, a strict Islamic penal code. (It included, for example, punishing rape victims for adultery.)

Institutionalized gender bias has had a lasting effect on the fabric of society there. The literacy rate for girls is approximately 20% lower than for boys, and religious extremists continue to terrorize girls out of going to school.

How this can help. Promoting gender parity in small ways can have wider implications. A World Bank report entitled "Women's Decision Making Power and Human Development: Evidence from Pakistan" found that "when women have more decision-making power at home, households tend to spend more on women's preferred goods (such as clothing and education), family members eat more non-grain food items and children, particularly girls, are more likely to be enrolled in school."

More government initiatives like the Pink Rickshaws, which allow women the freedom to safely get around and work, are what Pakistan so desperately needs. Sustainable economic growth is simply not feasible without gender equality.