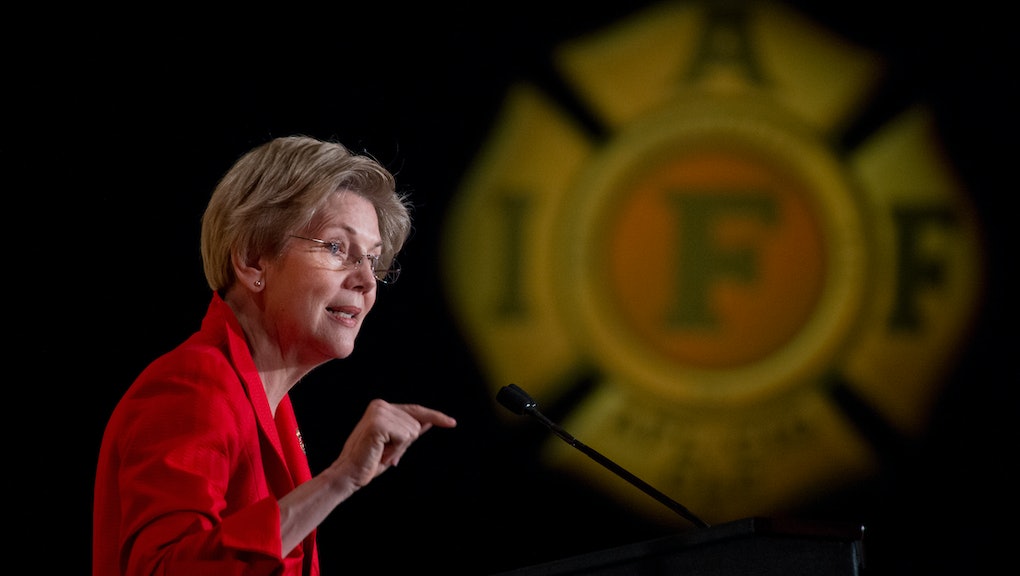 Sen. Elizabeth Warren (D-Mass.) has delivered a sharp rebuke to Wall Street megabanks threatening to cut off campaign donations to Senate Democrats. According to a Reuters report published Friday, the financial industry is withholding contributions in an effort to compel party leaders to "soften" criticism from Warren and others, who have repeatedly demanded that firms like Citigroup be more heavily regulated or broken up.

"The biggest banks on Wall Street have made it clear that they expect a return on their investment in Washington," Warren wrote in a response posted to Facebook. "They have reached a new level of brazenness, demanding that Senate Democrats grovel before them. Well forget it. They can threaten or bully or say whatever they want, but we aren't going to change our game plan. It's up to us to fight back."

A hero to many on the liberal left, Warren has emerged as one of the most powerful opponents of Wall Street's excess and influence on Capitol Hill lawmakers. After Citigroup successfully lobbied to roll back a key regulatory tool from the 2010 Dodd-Frank reform law during a December spending bill negotiation, Warren took to the floor of the Senate to deliver a stem-winding speech in which she declared Citigroup — whose own employees drafted the language in the provision — had been granted a "grip over economic policymaking in the executive branch [that] is unprecedented."

"So let me say this to anyone who is listening at Citi: I agree with you. Dodd-Frank isn't perfect," she said, pausing for effect.

"It should have broken you into pieces."

Democratic divide: A month earlier, in effort to keep Warren and her allies more tightly aligned with the party establishment, top Senate Democrats opened up a new position in their leadership. Called the "Strategic Policy Adviser" to the Democratic Policy and Communications Center, it was created solely for Warren, who was supposed to help manage growing friction inside the Democratic caucus.

But the ploy has mostly failed. In January, Warren played the lead role in defeating a White House nominee to the third-ranking position at the Treasury Department. Wall Street banker Antonio Weiss had been the administration's choice, but his dubious record in the financial services industry invited concern on the left, and a threat from Warren that she would hold up his confirmation. On Jan. 12, Weiss formally withdrew himself and took a different, less-powerful job that did not require congressional approval.

Will it work? Don't expect Warren or top liberals in the House of Representatives to lower their voices anytime soon. Stories like this will only incite Warren's growing power base into further calls to action against the influence of Wall Street money on lawmakers from both parties.

But for party leaders who understand how important corporate cash is when it comes time to fund increasingly expensive campaigns, the message from the financial industry cannot be ignored. Though they've only withheld or threatened to back off small donations this time around, consider it something like a warning shot. And with Wall Street-friendly Sen. Chuck Schumer (N.Y.) the early favorite to replace outgoing Minority Leader Harry Reid (Nev.) as the Senate's top Democrat in 2017, there is no reason to expect the party to stiffen its back.

For Warren, the line she has long sought to draw in the sand between the big banks and Washington could soon divide her from leaders inside her own party.