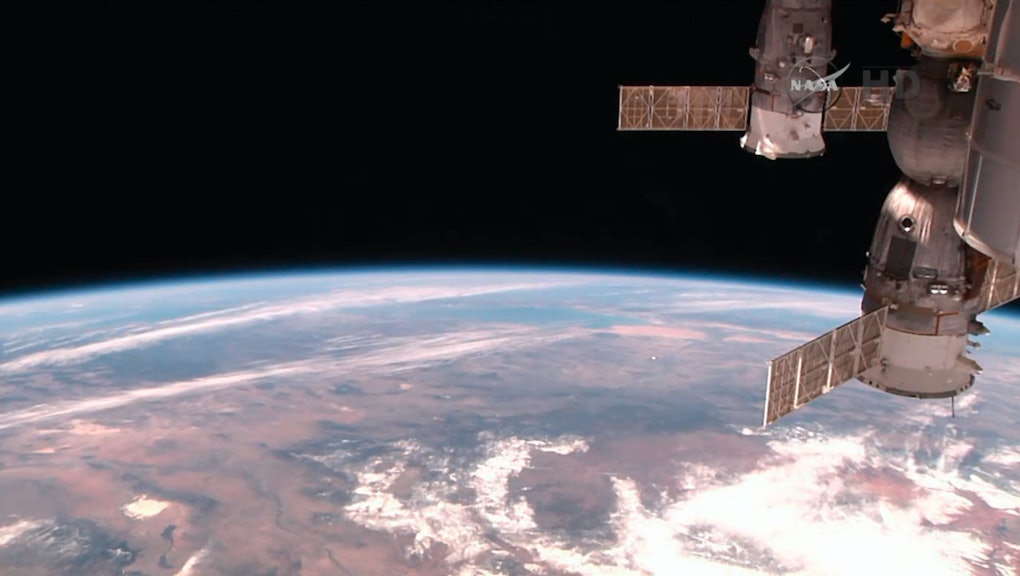 International Frenemies U.S. and Russia Will Partner To Build a New Space Station

NASA and its Russian counterpart Roscosmos have agreed to work jointly on a new space station to replace the aging International Space Station, which is set to cease operation in 2024. Talks between the agencies were held at the Baikonur cosmodrome in Kazakhstan, according to Russian state-backed RT. The news was announced Saturday at a Roscosmos press conference.

"We have agreed that Roscosmos and NASA will be working together on the program of a future space station," Roscosmos head Igor Komarov said, according to RT.

With Komarov and NASA chief Charles Bolden standing together, Russia invited countries not previously involved with the ISS to take part in the new venture, saying the project was "open," according to the AFP.

The news came at roughly the same time a Russian Soyuz spacecraft successfully docked with the ISS, bringing American Scott Kelly and Russians Mikhail Kornienko and Gennady Padalka to the station.

Putting themselves "above" politics: The cooperation between NASA and Roscosmos stands in stark contrast to the majority of U.S.-Russia news over the last year. After Russia's annexation of Ukraine's Crimean peninsula in March 2014, the U.S. placed a number of increasingly harsh sanctions on the country. After some initial foot-dragging, most of western Europe followed suit. After a Malaysia Airlines plane en route from Kuala Lumpur to Amsterdam was shot down over eastern Ukraine, likely by Russian-backed rebels using Russian weapons, analysts began speaking of a "new Cold War."

Believe it or not, though, cooperation between U.S. and Russian space agencies goes back decades and has historically transcended some of their darkest moments of mutual hostility. In 1975, the U.S. and Soviet Union embarked on their first joint mission, known as the Apollo-Soyuz Test Project. The mission was a diplomatic and public-relations success, with astronauts and cosmonauts shaking hands and exchanging gifts after linking their respective ships.

Russian assistance played an instrumental role in the launch of the original International Space Station in 1998. The station, which had to be assembled in orbit from individually launched component parts, was a remarkable achievement of international cooperation. Today, the facility is routinely visited by astronauts and cosmonauts, who generally have no issue putting themselves above politics on the ground.

"I think people lose track of the fact that we have occupied the International Space Station now for 13 consecutive years uninterrupted," Bolden said at a March 4 news conference reported in Space.com.

A better future? The concept of international boundaries doesn't exist in space as it does on Earth. In science fiction movies, this planet is usually visited — or under attack — by united alien species arriving from distant parts of the cosmos. The obvious implication is that those creatures, sophisticated enough to visit other planets, would have long ago settled the petty disputes that divided them at home. Each multinational space mission drives humanity another step, however small, closer to unity on the ground.

The truth is, we might not be able to stay on Earth forever. Going on to Mars or farther afield, we can only proceed if we are united as one planet.