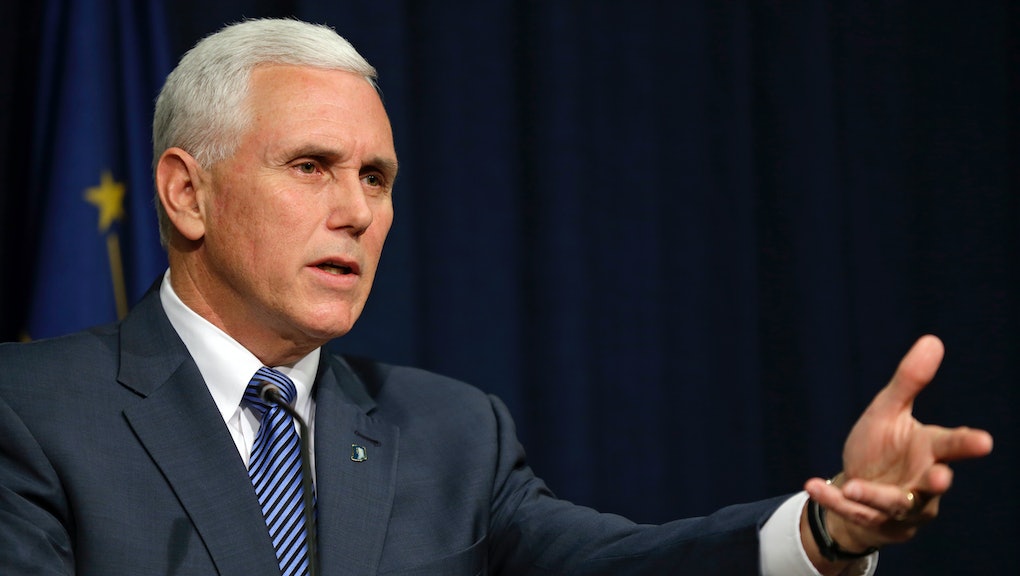 Does Indiana Governor Mike Pence think it should be legal to discriminate against gays and lesbians in his state or not?

That's the question Pence repeatedly tried to dodge on ABC's This Week on Sunday, resulting in a supremely awkward moment as Pence tried to justify his support of a recent "religious freedom" law that critics say would allow the state's businesses to refuse service to LGBT people.

The dodging begins at around 3:50 in the video below, when host George Stephanopoulos grills Pence about whether the bill would allow businesses to refuse service to gays. The governor refuses to answer, instead spouting off about "misinformation" and "shameless rhetoric" being spread by the bill's critics.

When Stephanopoulos asks him, "Do you think it should be legal in the state of Indiana to discriminate against gays and lesbians?" Pence responds with a disingenuous, "Hoosiers don't believe in discrimination."

Instead of answering Stephanopoulos' questions with a simple yes or no, Pence doubled down and tried to make it look like he was the pious victim of the unfair liberal media.

But right-wingers aren't the victims here. Despite the governor's piteous attempts to portray supporters of Indiana's religious freedom laws as facing an "avalanche of intolerance," the real intent of the laws is pretty clear: to legally protect those who want to refuse service to gay people, based simply on the fact that they are gay. Or put another way: legal discrimination.

Supporters of the Religious Freedom Restoration Act say all it does is assert citizens' rights to practice their religion without substantial burden by the government. But as Mic's Scott Bixby has previously written, its backers have been pretty frank about its intent as "an attempt to codify and protect anti-LGBT discrimination in the state of Indiana, giving legal cover for businesses that don't want to serve gay customers or employ gay workers."

CNN legal analyst Jeffrey Toobin says that while the bill might not protect a restaurant with a "no gays" policy, it would probably protect a florist who refused to prepare a bouquet for a gay wedding.

While other states have similar laws, Indiana's is being interpreted as a deliberate response to a recent federal court decision overturning the state's gay marriage. According to the pro-LGBT Human Rights Campaign, they're intentionally vague and leave interpretation up to conservative state supreme courts.

"In practice, most of these bills could empower any individual to sue the government to attempt to end enforcement of a non-discrimination law," the HRC wrote in a recent report. "The evangelical owner of a business providing a secular service can sue claiming that their personal faith empowers them to refuse to hire Jews, divorcees, or LGBT people. A landlord could claim the right to refuse to rent an apartment to a Muslim or a transgender person."

Or, as this satirical commercial puts it, "Indiana is a great place to be a bigot."

Pence and co. can't hide their intentions forever. In fact, much of the damage has already been done. Companies from Apple to Salesforce have denounced the new law as bad for business, with Salesforce even going so far as to say they will cut back operations in Indiana to avoid exposing their employees to state-endorsed discrimination.

The NBA issued a statement promising to treat all LGBT employees and fans with respect in Indiana, while the NCAA said it was "especially concerned" with how the law would impact its "student-athletes and employees." According to the Chicago Tribune, businesses across the state fear a "costly backlash" if outsiders begin to believe Indiana is a haven for bigotry.

Gov. Pence and Indiana right-wingers can whine and moan about how intolerant everyone is of their intolerance for as long as they like. But it's not very hard to see through it, no matter how many questions they dodge.