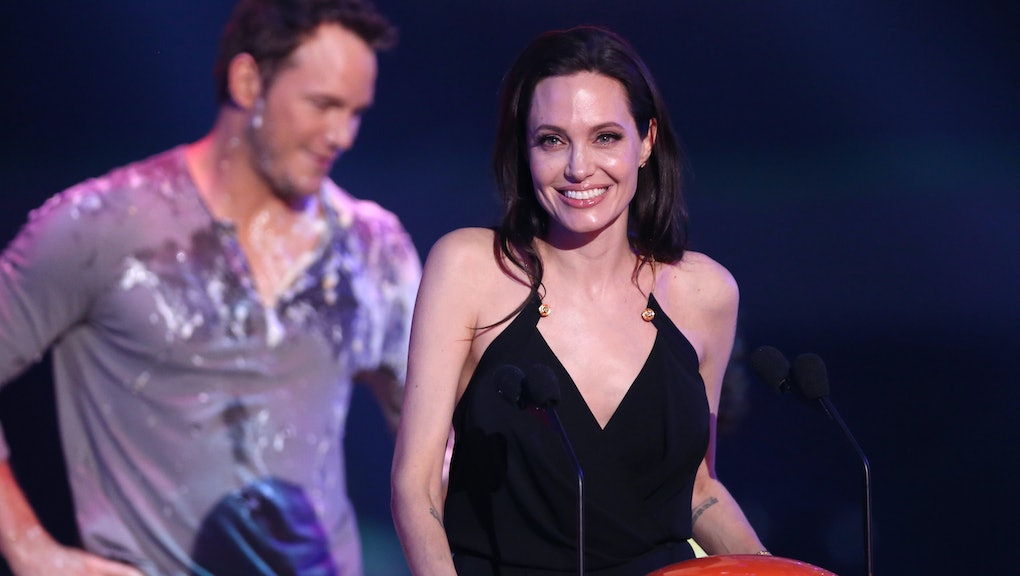 That was the message actress Angelina Jolie shared during her acceptance speech after winning the award for Best Villain at the Nickelodeon Kids' Choice Awards on Saturday.

In what was Jolie's first public appearance since publishing a riveting op-ed in the New York Times about her decision to have her ovaries removed, the actress delivered a surprisingly inspiring speech over the roar of a crowd of teens and tweens.

"I want to say that when I was little, like Maleficent, I was told that I was different," she said. "And I felt out of place — too loud, too full of fire, never good at sitting still, never good at fitting in. And then one day I realized something — something that I hope you all realize. Different is good. When someone tells you that you are different, smile and hold your head up and be proud."

Given Jolie's penchant for outreach and speaking out about important issues, it's more the context than the content that should be labeled surprising. While the audience was mostly expecting hosts and honorees to be "slimed" in classic Nick fashion, Jolie actually made great use of her few seconds on the stage sharing her message with a crowd that likely needed to hear it the most.

Though it was short and simple, reaffirming the importance of individuality and being comfortable with difference was an excellent use of Jolie's speech. While she did not mention it specifically, one could potentially link Jolie's words to LGBT acceptance, calling out the troubling statistics of bullying, self-harm and even suicide among LGBT youth, all because they're told they are "different."

While being different and "thinking different" isn't an entirely new idea and has been championed by many popular figures before her, the fact that Jolie was able to so quickly and powerfully tap into her own personal experiences to a valuable lesson with such an impressionable, young audience is surely something to be admired. Different is good, and everyone should remember that.