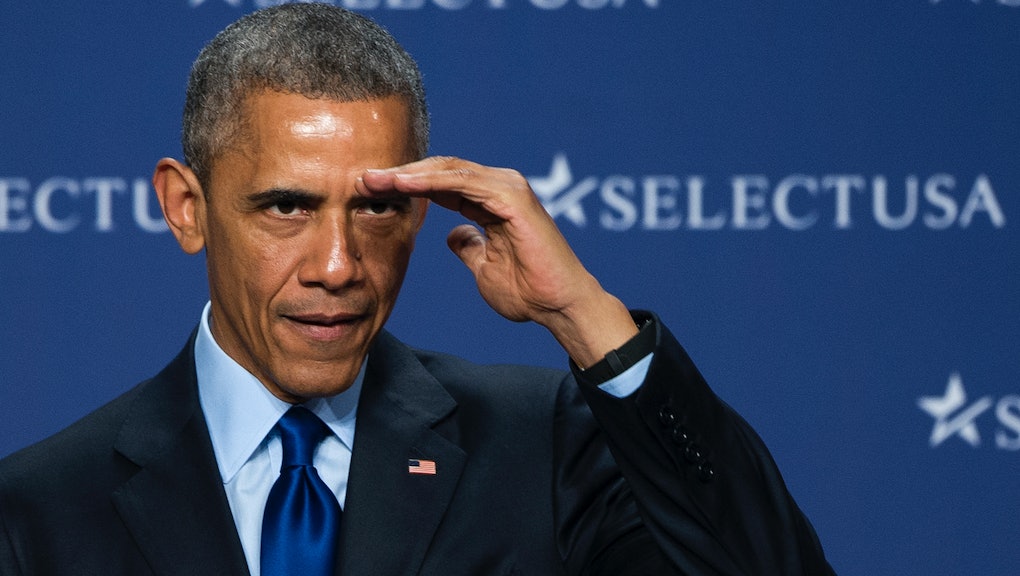 More than a third of Republicans believe that President Barack Obama is an "imminent threat" to the United States, outranking Russia's authoritarian president Vladimir Putin and Syrian leader and alleged war criminal Bashar al-Assad in a new Reuters/Ipsos poll.

The poll asked 2,809 Americans for their opinions on "how much of a threat a list of countries, organizations and individuals posed to the United States," according to Reuters. Respondents used a scale of 1 to 5, ranging from "no threat" to "imminent threat." Thirty-four percent of GOP respondents deemed the president an "imminent threat" to the republic. Next on the list was the Democratic Party, at 27%. Putin ranked third, with 25% viewing his regime in equally dire terms. Only 23% rated Assad as a deadly concern.

Now entering its fifth year, Syria's civil war has killed more than 200,000 people. In September 2013, the United Nations filed a report accusing Assad of using chemical weapons, including sarin nerve gas, on his own people. A former KGB agent in the Soviet Union, Putin has been in power as either president or prime minister since 2000. He recently admitted to launching a covert war in Ukraine last year.

Among the general public, the results skew closer to reality. Reuters found that the Islamic State, the militant group that now controls parts of eastern Syria and a number of major cities in northern Iraq, was perceived as the gravest threat, at 58%. With 43%, al Qaeda came in a distant second. Thirty-nine percent said they were concerned about cyber attacks, while North Korean dictator Kim Jong-un was rated as a big worry by 34%.

Now engaged in serious — and controversial — talks with the U.S. government over a deal to restrict and manage its nuclear capacity, Iran and its leader Ayatollah Ali Khamenei was seen as an "imminent threat" by just 27% of respondents overall.

No surprise, no compromise: After more than six years of watching angry politicians and right-wing firebrands paint Obama as a wannabe dictator hellbent on destroying American democracy, it's not exactly a shock to find that so many Americans perceive him to be some kind of existential menace.

But before you pin this grim state of affairs on a roving band of hardcore conservatives, consider this: Democrats offered an only slightly less blinkered assessment, with a little more than 1 in 5 describing the Republican Party in the same way.

In their more lucid moments, leaders from both parties talk about the need for goodwill in government, especially the one slouching around our nation's capital. But when those same people go back home and gin up voter frustration with questions about Obama's citizenship — or Ted Cruz's, for that matter — this is the inevitable outcome. When you tell voters, over and over again, that the opponent is in fact the enemy, it suddenly becomes very easy to turn down any kind of deal, or any offer of decency.