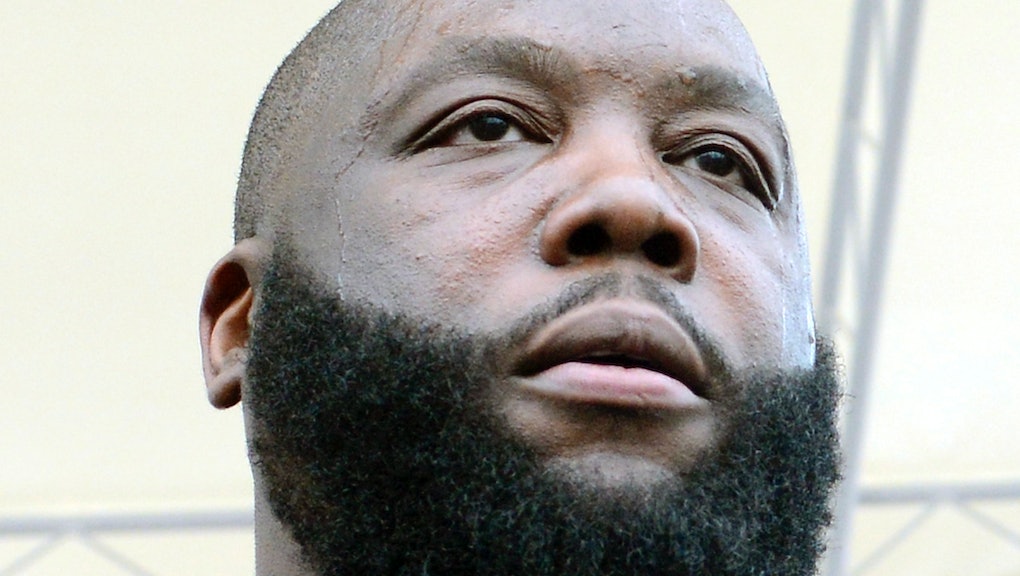 Killer Mike may be one of the most socially conscious rappers in music, but a lot of people can't see past his name. And that's only the tip of the iceberg.

"People don't make the same assumptions about white groups like the Killers," he writes in a new op-ed for Vox. "It only seems to apply in an unfavorable manner when you're talking about a 6-foot-3 black guy."

Killer Mike is a brilliant critic of the many other biases our society holds against rap, including, most pressingly, how our criminal justice system discriminates against rappers and their lyrics. Rap lyrics are art just as novels are, but when rappers are on trial, courts frequently use lyrics out of context, playing on entrenched stereotypes of black men as criminals not capable of the sort of imagination it takes to make art. It's far from the first time Killer Mike has attacked this racist system, but this new piece may be his most powerful examination yet.

His new piece, co-written by Erik Nielson, an assistant professor of liberal arts at the University of Richmond and author of several studies on the subject, looks primarily at the case of rapper McKinley "Mac" Phipps, who is currently serving 30 years for a crime he insists he didn't commit.

Authorities in New Orleans manipulated Phipps' lyrics (and his witnesses) to prove he was a murderer, despite any physical evidence.

"This defendant who did this is the same defendant whose message is, 'Murder murder, kill, kill, you f--k with me you get a bullet in your brain," the assistant district attorney in Phipps' trial told the jury, according to the Huffington Post. "You don't have to be a genius to figure out that one plus one equals two."

However, Phipps never even wrote the lyrics as quoted. The prosecution spliced together two different songs to make Phipps' appear as though he had directly threatened murder, according to the Vox op-ed. Nielson told the Huffington Post that it was "the first time he's seen the prosecution 'misquote and misrepresent lyrics' to such a degree." It's evidence that rappers and their lyrics are still misunderstood and mistreated to a profound extent in this country.

This isn't the first time Killer Mike has spoken up. The rapper previously co-authored a piece with Nielson for USA Today. There, he focused on the conviction of Anthony Elonis, who posted violent rap lyrics directed at his arresting officer and wife along with notes saying, "Art is about pushing limits." Those lyrics landed him 44 months in jail for "communicating threats." Vonte Skinner was found guilty in a 2008 trial where the evidence against him was largely made up of his most violent lyrics, Mike and Nielson wrote. There are hundreds more examples of rap's use as a biasing force in trials.

"Ignoring many of the elements that signal rap as form of artistic expression, such as rappers' use of stage names or their frequent use of metaphor and hyperbole, prosecutors will present rap as literal autobiography," the duo said in USA Today. "No other fictional form — musical, literary or cinematic — is used this way in the courts, a concerning double-standard that research suggests is rooted, at least in part, in stereotypes about the people of color primarily associated with rap music, as well as the misconception that hip-hop and the artists behind it are dangerous."

Mike's analysis is exactly right. Few prosecutors would believe Johnny Cash actually "shot a man in Reno just to watch him die," as the artist claimed to in the song "Folsom Prison Blues." But when black rappers like Skinner or McKinley make make similar claims, jail time is a serious threat. The Johnny Cash analogy was used in a briefing in Skinner's case, but it wasn't enough keep him free him at the time.

The biting irony. As Mike and Nielson write in Vox, the violent lyrics of gangsta rap were originally written to shed light on the violence of our country's ghettos. They're meant to describe the inequalities and bigotry of life in the hardest parts of the country. Our country's law enforcement has responded to these depictions with even more bigotry and prejudice. The court's treatment of lyrics in the courtroom is, Mike says, one more example of "a much broader targeting of young men of color by law enforcement."

But the artist is doing his part to help reveal and unravel these racist practices. He's truly living the pledge he made in a 2014 Billboard op-ed: "I will never take a day off policing the people we pay and keep a public trust with," he wrote. "I will use my camera, my pen, my pad and my network to do my part, to make sure that Americans will no longer fear their government or its employees."

If more choose to follow his brilliant example, it's possible we could actually vindicate hip-hop as well as the culture that created it. It isn't criminal, it's art — these trials aren't justice, they're racially prejudiced.