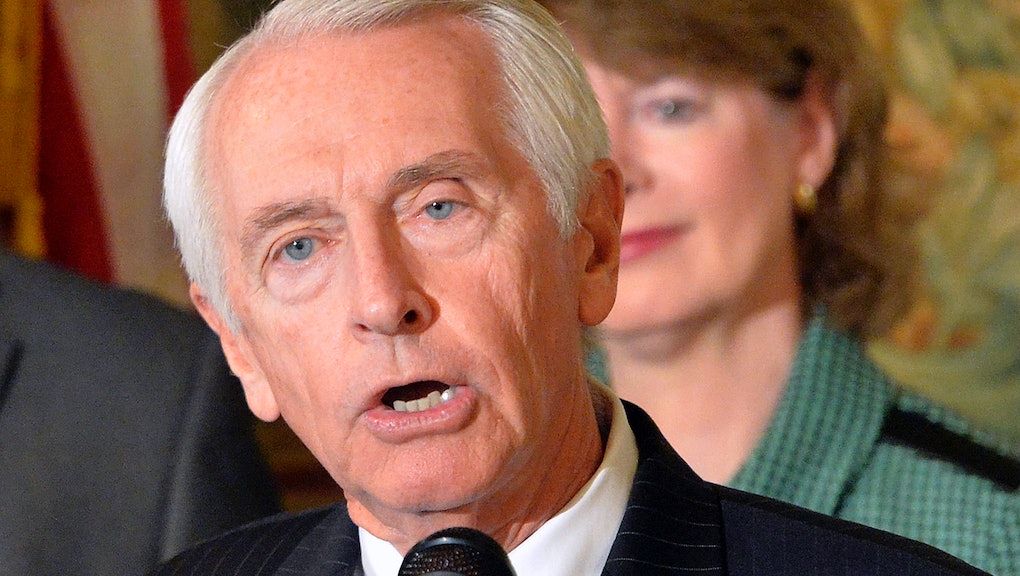 Last week, Kentucky lawmakers worked late into the night wrapping up the final day of their legislative session. It was a busy night to end a busy session, and included deals on gas taxes, a provision on domestic violence and the passage of a bill that changes how the state treats heroin addicts.

The law on heroin, which went into effect immediately, was the crowning achievement of the night. Kentucky is reeling from a serious heroin epidemic, and the state legislature was desperate to take steps to remedy its public health crisis. The law makes penalties on heroin dealers in the state harsher, the kind of measure one would expect from a conservative state in the Upland South.

But the law also boldly defies expectations. While penalties for dealers have increased, heroin addicts will now be shown a great deal more mercy.

The law allows local health departments to create needle exchanges, which means that heroin users can swap used needles and syringes for clean ones for free, minimizing the risk of transmitting infectious diseases. Users who overdose won't be charged with a crime, but will be recommended to treatment services. The law also expands access to naloxone, a rescue drug for counteracting heroin overdose, by taking steps to allow pharmacists to provide the drug to addicts, their family members and friends, without a prescription. A "Good Samaritan" clause promises amnesty to people who call emergency responders about an overdose.

"We're coming to help you. Work with us. Help us to help you to get on the road to recovery, and to becoming a productive member of society," Steve Beshear, the Democratic governor of Kentucky, said Wednesday at a press conference.

Beshear's quote is remarkable. It's not the kind of rhetoric on drugs you expect to hear from a politician in a red state or even a blue state, for that matter. In America, we don't try to understand drugs. We wage war against them.

A new approach: Kentucky is searching for a new way to address an old problem. While there's little evidence that the zero-tolerance, puritanical approach to addiction works — and it's clearly not saving Kentucky — there's plenty of evidence to suggest that treating drug addiction as a health problem deserving of compassion works quite well.

Kentucky looked to Ohio, its neighbor to the north, for inspiration. A few years ago, Portsmouth, Ohio, began a needle exchange program to cope with a heroin crisis, which in turn had created a hepatitis C crisis. According to USA Today, the "Prevention Not Permission" program, which hands out about 5,000 clean needles a month, has "helped reduce hepatitis C, gotten needles out of parks and streets and, most importantly, linked addicts to treatment, testing and counseling they might not otherwise seek."

Other states have had success with needle exchange programs as well. In 2014, New York's AIDS Institute tied the state's syringe exchange programs to a sharp decline in HIV infections among intravenous drug users over the course of 20 years.

Needle exchange programs are difficult to study and remain the subject of sustained scholarly debate, but their flaws don't typically lead to an increase in drug use. Instead, at worst, they may fail to decrease disease transmission rates. And regardless of their efficacy in eliminating disease, they still serve as a conduit to treatment services.

Clean syringe programs, which would be allowed but not actively funded by state law, constitute merely one element of Kentucky's vast re-evaluation of its legal attitudes toward heroin addiction. Kentucky state Rep. John Tilley, who worked on the legislation, told the Huffington Post that the law amounted to a major "cultural shift."

"I want to encourage the use of medically assisted treatment," Tilley said, according to the Huffington Post.

Treating addiction as a disease: Tilley's use of the word "medically" is crucial. Kentucky's new policies on naloxone access, amnesty for people calling in about overdoses and injection of cash into health services represent a critical pivot away from the classic notion of addiction as a personal failure of willpower, and a step toward understanding it as a disease.

"This law absolutely represents a step forward for the state. But this is just the tip of the iceberg," Jennifer Havens, an associate professor at the Center on Drug and Alcohol Research at the University of Kentucky, told Mic via email. "Now is the time to delve into the science in order to determine best practices in designing and implementing comprehensive syringe exchange programs."

The classic example of the power of treating addictive drugs as a health problem rather than a criminal problem is Portugal. At the turn of the millennium, Portugal was enduring a staggering drug crisis — a full 1% of its population was addicted to heroin. In 2001, Portugal's government decriminalized all drugs, opened up health facilities for addicts, created financial incentives for employers to hire addicts and expanded its welfare program. Over the course of the next decade and a half or so, overdoses, disease transmission from injected drugs and overall drug use declined by most measures. The Portuguese model has attracted a great deal of attention from other European governments, and is considered by many to be a healthy alternative to the conventional routes.

Kentucky has only just begun to think about drug addiction differently, and there's a great deal more it could do to be proactive about funding rehabilitation. But this kind of shift in the tide can be the beginning of a sea change.