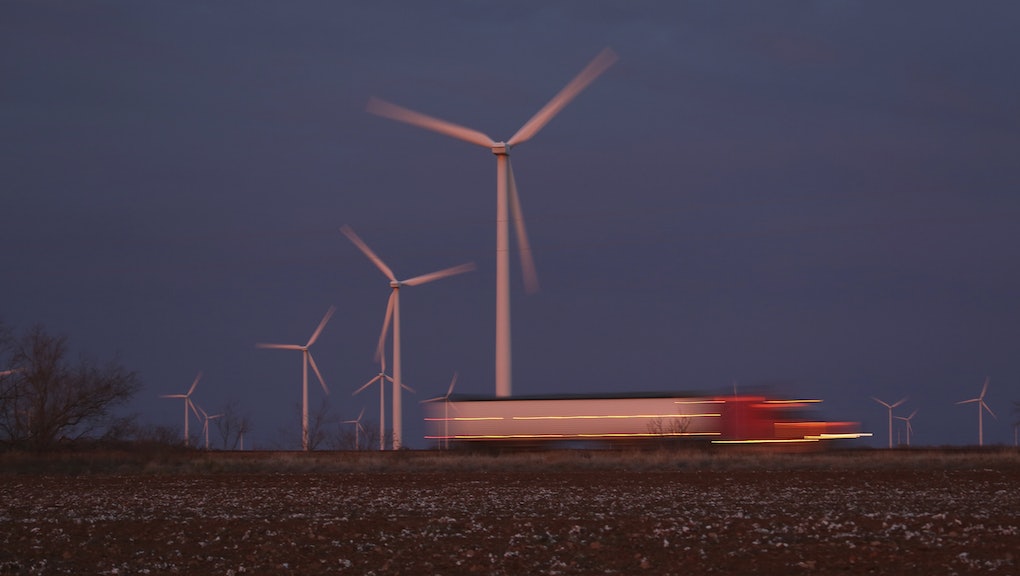 Clean, green electricity can benefit everyone, not just environmentalists.

Case in point: The Guardian reports that Georgetown, Texas, located in a county that voted more than 60% Republican in 2012, is set to have 100% of its electricity sourced from wind farms and solar plants by January 2017. That makes Georgetown the first city in the Lone Star State to derive its power entirely from green sources. In switching to renewables, they're actually saving money.

"No, environmental zealots have not taken over our city council, and we're not trying to make a statement about fracking or climate change," Georgetown Mayor Dale Ross writes in a letter in Time. "Our move to wind and solar is chiefly a business decision based on cost and price stability."

By opting out of fossil fuels, the Guardian reports, the town will keep their energy prices locked in close to its current low rate of 9.6 cents per kilowatt-hour until the year 2041, avoiding the price fluctuations associated with fossil fuels.

"I was called an Al Gore clone, a tree-hugger," interim City Manager Jim Briggs told the Guardian. "I'm probably the furthest thing from an Al Gore clone you could find. We didn't do this to save the world — We did this to get a competitive rate and reduce the risk for our consumers."

The background: In a state that produces more than a third of the country's oil, Georgetown's renewable energy plan is a definite outlier. But it was Republican leadership and the Texas Public Utility Commission that pushed for a $6.8 billion investment in the Competitive Renewable Energy Zone. That project placed more than 3,600 miles of transmission lines between wind and solar farms in West Texas and major metro areas in the eastern part of the state, according to Scientific American.

"The basic infrastructure investment from the state was created at a scale that has made renewable energy economic," Thomas Edgar, an engineering professor at the University of Texas, told Scientific American. "Currently, we're riding the coattails of that forward-looking decision made six or seven years ago."

Though renewable power makes up just a small part of the U.S. energy market, most of the new production capacity being generated across the country is in wind or solar. The chart below, based on data from Mother Jones and GTM research, shows that solar and wind have collectively outpaced natural gas plants and the construction rate of new coal facilities has dwindled to near zero:

As solar and wind power become cheaper to produce, renewable energy is quickly upsetting traditional energy markets. According to the Solar Energy Industries Association, approximately 36% of all new U.S. energy production in 2014 came from solar. Prices of solar panels have dropped by 63% since the third quarter of 2010. Energy Information Administration data indicates wind is already cost-competitive and that subsidized solar power is already cheaper than burning fossil fuels in some markets, such as the sun-rich Southwest.

We need to act now: The United States could stand to beef up its commitment to renewable energy. China already generates 22% of its energy from green sources and is looking to expand that to more than 32% within 10 years, according to the Lebanon Daily Star. Mexico generates 15% of its energy from renewables and it aims to reach 35% by 2024, the Daily Star reports.

Meanwhile, policymakers are starting to understand the environmental costs of burning. One recent study published in Climatic Change estimated that each gallon of gas consumed in the United States now translated to $3.80 per gallon of gasoline in environmental damages, for a total anywhere from $330 to $970 billion annually in damages from power generation. In other words, the costs of fossil fuels are much more far-reaching that they might initially seem.

"[I]f we start to think more deeply about the true costs, externalities and byproducts of fossil fuel use, renewable energy can look like a pretty good alternative," writes Slate's Daniel Gross.

Why you should care: Georgetown is a prime example that renewable energy doesn't have to be a bitter political battle. The falling price of green energy is quickly making it a good investment regardless of one's opinions on climate change or saving trees.

It will take significant time, money and effort to make the switch to green energy across the country. But not only are renewables now being sold at competitive rates — they're actually being sold as long-term, stable investments that will persist through oil price shocks and economic disruptions.

"I don't really think we should be relying too much on oil, even though they have to right now. That don't last forever," Georgetown barber Jon Klopf told the Guardian. "Sun will, though. Long as the sun comes up, the wind will blow."

Cheaper, greener and consistent: That's something everyone can get behind, from conservative cowboys to left-wing environmentalists.