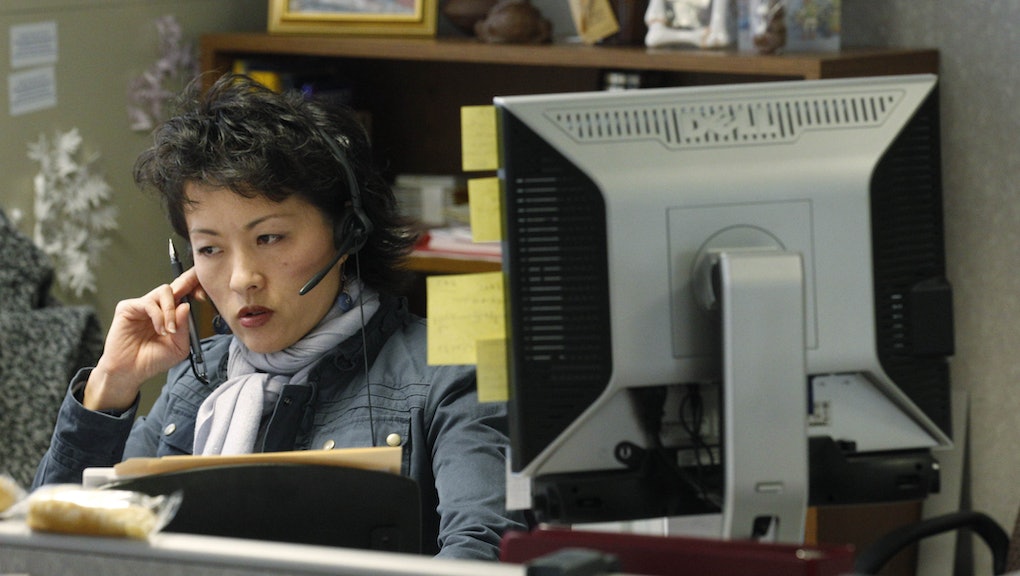 A Harvard-based startup just launched a Kickstarter that might save your life someday.

It turns out 911, one of the best-known and widely used emergency systems in the country, is, in some ways, deeply flawed. RapidSOS, a team of 15 including people from MIT and Harvard, has developed a product that would upgrade the nation's emergency hotline using your smartphone. An app they've created sends dispatch centers all your necessary rescue information at the push of a button, eliminating the need for long explanations when calling for help. The $60,000 RapidSOS hopes to raise is to build physical, Bluetooth-connectable panic-button wearables, like a ring to alert help subtly in a sexual assault scenario, or a necklace for elderly people who live by themselves.

"The people who work in the dispatch community are heroes in what they do," RapidSOS co-founder Michael Martin told Mic. "The environment is really intense and we've been handicapping them with this dated infrastructure. We can do better from a technological standpoint, and that's what we're focused on doing."

The problem: When you call 911 from a landline, the dispatch computer receives and displays your phone number, the name it's registered to and the address it's coming from. But if you call from a mobile phone, the address is, if anything, that of the nearest cell tower. According to the Federal Communications Commission, 73% of 911 calls come in from cell phones.

If Martin were to call 911 from where he was sitting on the Harvard campus, it wouldn't go to the local 911 dispatch center in Cambridge. It would go to the center in Framingham, Massachusetts, where every other call in the state goes. After describing his situation and location, he'd be transferred to the local Cambridge dispatch, where he'd explain the problem — and the location — again.

"The reality is, if there's any kind of emergency where the caller doesn't know precisely where they're located, it's impossible for 911 to have a dispatchable address," Martin said. "Meaning even today, 911 can't send a car to a specific house."

Additionally, some 911 call centers across the country are using old, sometimes outdated maps, according to an NBC News report. Without proper locating technology and information, dispatchers can't find as many as 60% of 911 wireless callers.

Recognizing the need for change: The Rapid SOS Kickstarter video presents a stream of unsettling facts about the failures of the 911 emergency system. For example, of the 240 million 911 calls made annually (which is up 26% in the last decade), more than 10,000 resulted in fatalities from inaccurate location information. The problem stretches from coast to coast: In California, 1 in 14 cell phone-based calls to 911 is put on hold, and in Washington, D.C., 90% of wireless calls don't make it to dispatch with accurate location information.

Some larger cities have modernized their dispatch centers — in San Francisco, callers can send video and text with 911 — but other centers, especially in rural areas, make assistance by cell phone incredibly difficult.

"Growing up in rural Indiana, my father fell off the roof of our house while he was trying to clear snow off of it," Martin told Mic. "He broke his wrist and shattered his femur. For two hours, he called 911 while he was lying in this freezing driveway, but he couldn't get through because his phone service was too weak. We even had Wi-Fi at the time, so if Uber were in rural Indiana, he could've even called one of them to pick him up."

It was Martin's first experience with an antiquated emergency system that eventually made him think, "If I can push a button and a black car will pick me up in minutes, why can't I do that with an ambulance?"

Developing a solution. You'd think it would be a simple fix: Just turn on the GPS tracking in your phone.

But when you call 911, more often than not you're using the same copper-line infrastructure Frank Sinatra used to call Mia Farrow, a system that was never intended to transmit information coming from somewhere other than an immobile structure. Cell phone towers can receive the data from your phone, but that data has no way of reaching the dispatch center.

This was RapidSOS's major hurdle. As it turned out, no one had figured out how to put all the pieces together yet.

Using the RapidSOS app, dispatch receives the call the same way it would from a regular land line — but with much more information needed to help find the caller, including optional notes like blood type and allergies. In situations where a caller can't talk, like if he or she fears being heard by an intruder, or is in the vehicle of a kidnapper, RapidSOS can inform dispatch of something as specific as the highway they're traveling on and at what speed.

Testing in real time. RapidSOS has 25 institutional partners, like universities, testing the program in beta mode, and has tested it with 100 dispatch centers across the country.

"With the Kickstarter campaign, we're asking if people would like to be a part of this and, over the next couple months, to help test it in their own settings," Martin said.

While the Kickstarter doesn't end until April 21, the technology already works and is ready to implement. RapidSOS could be the future of 911, and a better way to save lives in the 21st century.