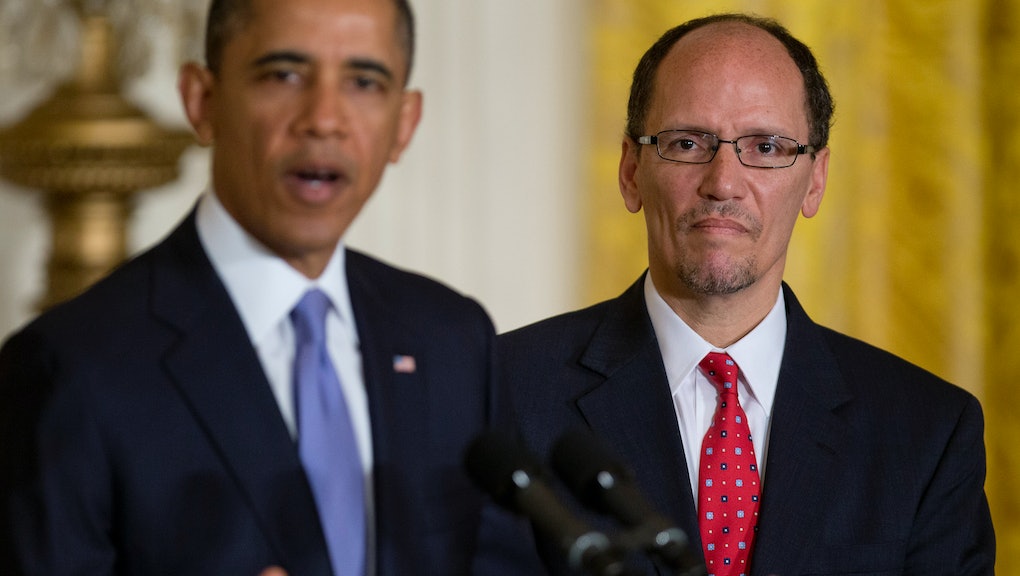 While the United States is a leader on many issues, we seriously lag behind other countries when it comes to paid leave policy. In his most recent State of the Union address, President Barack Obama urged Congress to pass the Healthy Families Act, which would give all Americans access to seven days of paid sick leave a year. Without movement in Congress, U.S. Labor Secretary Tom Perez is kicking off the "Lead on Leave" roadshow on April 1. He's taking the case for paid leave straight to state and local governments, major corporations and grassroots activists.

I hear so frequently from people that because we're the only industrialized nation on the planet that doesn't have some form of federal paid leave, many families are forced to make choices between the job that they need and the family that they want to care for. In the morning, you put your [sick] kid on the bus to school because you can't afford to take a day off.

With this Republican Congress, it's not interested in helping working families in this area, so we're taking the case directly to state and local governments, and working with a lot of progressive companies that are doing the right thing and recognizing that the high road is the smart road.

Canada and the United States had the same rates of female labor force participation back in 2000, and [now] Canada is about eight points ahead of us.

Every other country, certainly the industrialized countries that we consider to be our competition, they're lapping us on this. Canada and the United States had the same rates of female labor force participation back in 2000, and [now] Canada is about eight points ahead of us. If we had kept pace, we'd have about 5 ½ million more women in the workplace now.

The reason they're kicking our butts is because they have paid leave laws, including maternity leave and sick leave that reflect the fact that we're not living in a Leave It to Beaver world anymore, we're living in the Modern Family world, and we need to help and support families. We don't do that here in the United States. We pride ourselves in this country on leading the world on so many issues, but paid leave we're not leading on.

If you get sick and you have a job, it'd be nice to have a little bit of flexibility so you could get paid. My daughter works at a restaurant part time. If the person serving me is sick, I'd rather have that person stay home. But that person can't afford to stay home because in most restaurants, if they stay home, they don't make any money.

In the rest of the world, there's a safety net for that, so you don't have to make those tough choices. I think we ought to do the same thing here. Some states are doing it. Connecticut enacted sick leave laws. Guess what? They've been studying it and the sky hasn't fallen, and other states and localities are following suit.

The moral arc of the universe is long and bends toward justice, but it doesn't bend on its own.

You can't sit back and watch things happen that are not good, and then not get involved in changing them. I'm a civil rights lawyer and I was deeply affected by observing, listening and learning from the civil rights movement. The civil rights movement is about marshaling the collective power of "we" and recognizing that the moral arc of the universe is long and bends toward justice, but it doesn't bend on its own.

Early on, I learned you have got to get involved. I had a lot of involvement in grassroots organizations that were very impactful to me. My parents taught me that you have to leave the world a little better than how you found it. That's kind of the value that operates and animates every day of my life.

We have to change our Neanderthal paid leave structure in this country, but we can't do it if we don't get young people and others to get involved in this movement. Stand up and say, "Hey, this is the right thing to do and this is the smart thing to do. I didn't win the boss lottery, so I don't have this benefit." That's why we need so many young people to get involved. I hope they'll go to dol.gov/paidleave or #LeadOnLeave and spread the word.

We're going to solve this problem one community at a time, and then we're going to force Congress, because the Republican leadership appears not to want to listen very well on this issue. But they fail to act at their peril, and we're going to make it perilous.