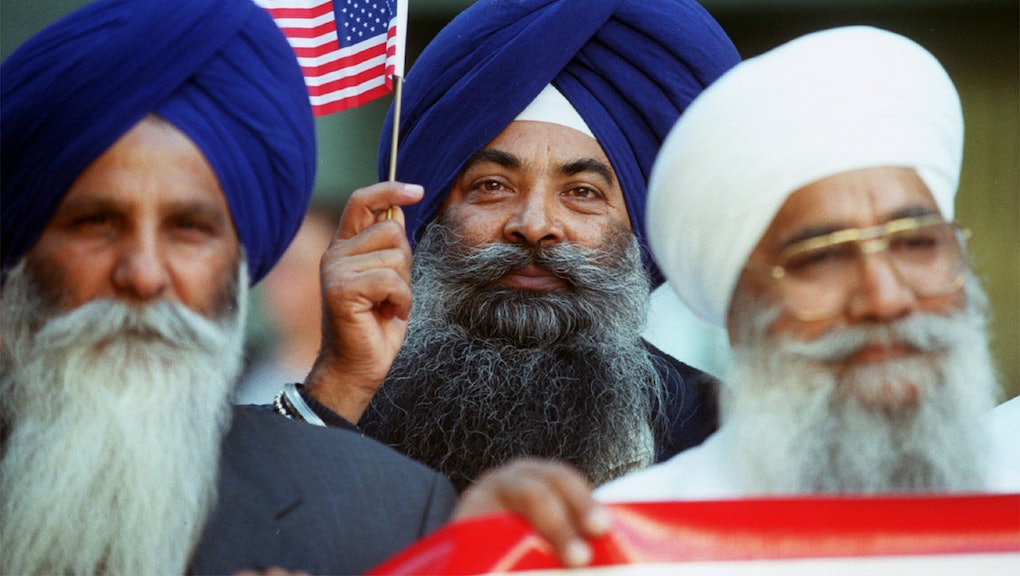 The Feds Were Not Counting Hate Crimes Against Sikhs, Arabs and Hindus — Until Now

The FBI's Hate Crime Data Collection Guidelines and Training Manual, the gold standard of protocols that the bureau produces to aid law enforcement, will now cover hate crimes against against Sikhs, Arabs and Hindus in the United States. The Sikh Coalition announced the development in a press release on March 25.

The news doesn't come a moment too soon.

An exhaustive report by the Huffington Post found anti-Sikh incidents across the country in places as diverse as Arizona, New York, Illinois and California. In 2012, a Hindu man was killed after he was pushed in front of a moving subway, while American Arabs have faced ongoing violence since 9/11.

In fact, since the 2001 terrorist attacks, incidents against "Muslim-looking" groups spiked dramatically. According to the Leadership Conference on Civil and Human Rights, hate crimes against Arabs, Muslims and Sikhs in 2001 saw a 17-fold increase from 2000, and even as late as 2007, the number was still higher than before 9/11.

"Building trust with members of these communities is essential, particularly in light of the post-9/11 backlash that many individuals in these communities have faced through suspicion, or ignorance," the report reads.

Singh told Mic that the key win from the change would be in education. "A lot of law enforcement officials are ignorant about Sikhs," he said. "We've had accounts where Sikhs were assaulted and law enforcement didn't realize that a turban was an article of faith, and not like a pair of pants or a sock."

A response to tragedy. The need to officially count and curb hate crimes against Sikhs and other religious minority groups took on a new urgency after the 2012 Oak Creek massacre.  The peaceful Wisconsin town was shattered after gunman Wade Michael Page walked into a Sikh temple and killed six people before committing suicide. Page's motive remains unknown, but evidence emerged after the shooting linking him to a number of neo-Nazi and white supremacist organizations.

After Oak Creek, U.S. Attorney General Eric Holder announced in 2013 that federal guidelines would be updated, however turning the words into action was a slow process.

"We were warned at that time that it wouldn't be until 2015 at the very least that the new changes would be operationalized," said Singh, whose group and others had been lobbying the government years before Oak Creek. Singh, however, warned that the new guidelines were still not a cure-all.

"A large number of jurisdictions around the country ... don't even bother to report hate crimes to the FBI," he said. "The whole system is voluntary." A 2005 report by the Bureau of Justice Statistics found that the actual number of hate crimes in the United States was 15 times higher than the officially reported number.

It all begs the question, where were the DOJ and FBI before? Despite repeated inquiries, the Department of Justice was not immediately available for comment.

"A lot of it frankly is inertia," said Singh, who added that his contacts within government told him that he couldn't expect authorities to move at anything beyond a glacial pace.

Hate crimes are not just crimes against the individuals targeted, but against the society at large. In a nation that made its name on the strength of its diversity, we cannot accept hate crime in any form. Accurately counting the tally is a necessary first step toward ultimately bringing it down to zero.