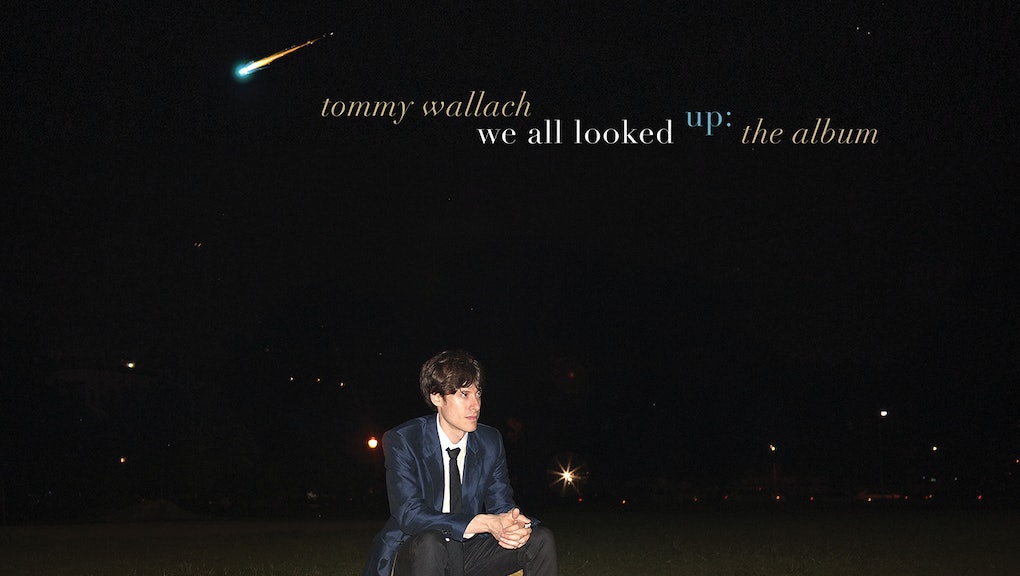 This Musician's Debut Novel Brings Together Music and Narrative

Music has always been a vessel for storytelling, and through an innovative project, musician Tommy Wallach has brought tune and tale together like never before.

We All Looked Up is the title of both Wallach's debut novel and his latest album. He designed the dual-medium project to give readers and listeners something extra to enjoy — a book and an album that complement each other.

Though Wallach's project isn't the first to attempt the split, it is one of the first that targets a young adult audience. For a generation that often engages with multiple stimuli at once, We All Looked Up represents an exciting new path for artists to share their message in multiple forms.

In We All Looked Up the novel, four lead characters from different cliques come together against a backdrop of events anything but typical for the YA genre. The world is ending. An asteroid is headed straight for earth, and four Seattle teens must come to grips with that fact.

It's the end of the world as we know it. For plot inspiration, Wallach turned to an unusual source: Danish director Lars Von Trier's 2011 film Melancholia, which starred Kirsten Dunst as a cosmically depressed bride bracing for the end of the universe.

Wallach was surprised that no one had broached the apocalyptic subject in a YA conceit, at least not in quite in this fashion. Although Melancholia's end of the world is allegorical as the crushing weight of depression manifests, Wallach wanted to explore the theme more literally.

"I hope that [We All Looked Up] works on that level, that you feel the symbolic apocalyptic reality that is being a teenager, and how big all your feelings are at that age, how desperate every moment is at that age," he told Mic. "At the same time, I was interested in the plot element of it, more so certainly than Lars Von Trier was."

In other words: The end of the world for teens may always feel like it's just around the corner. But for these kids, it actually is.

Two of the novel's characters, overachiever Anita and slacker Andy, are musicians. When Wallach needed songs for them to play, he selected some of his own material. That led to an idea: Why not write a companion album for the novel? "Some of the songs I had already written," Wallach told Mic. "And then when I knew this was gonna be it, I started writing some other songs."

Wallach's goal was less to fully integrate album and narrative and more to create complementary works.

"They're separate entities, and I hope people can enjoy them both," he told Mic. "I just hope some kids are excited by the idea of 'Wow, I've never been able to read something and then find out that the author put a lot of time and thought into the music of it, too.' I just think that's cool."

The end of the world for teens may always feel like it's just around the corner. But for the kids in 'We All Looked Up,' it actually is.

A new frontier: Wallach is a versatile and talented musician with strong sense of how to marry divergent sounds, as evidenced by the album. The novel itself is an exhilarating, if quick, read, perfect for its audience. But the real excitement lies in the possibility of companion works taking root in other parts of the literary world. The resurgence of readers in recent years indicates there's an opportunity to grow the potential audience even further.

Wallach's efforts have caught Hollywood's eye, too: Paramount optioned We All Looked Up in September. Though he's cautious about the adaptation — as he explained, studios "option a lot of stuff that has buzz, just because they'd rather have the rights to it if something happens" — he's enthusiastic about it. There's no decision on whether or not the songs will be included, but so far, things are progressing swimmingly.

If it works out, We All Looked Up will be a threefold experience for young consumers: book, album and film. Such integration is a whole new frontier for culture — quite the opposite of the end of the world.