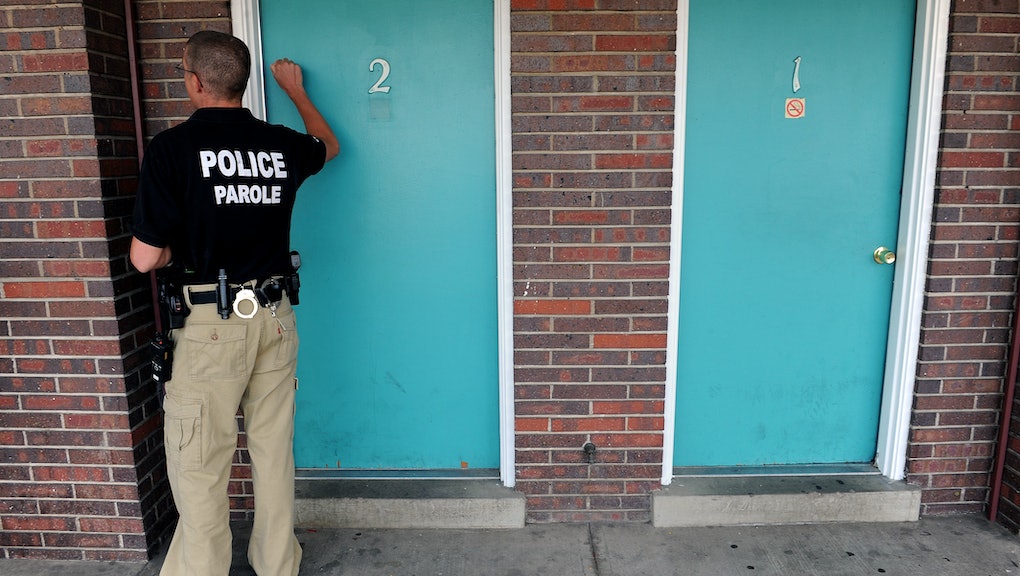 A parole officer in South Florida was fired and arrested last week after a woman who was serving probation accused him of raping her, and provided video evidence of one of the alleged rapes.

WSVN reports that the accused parole officer, 50-year-old former Florida Department of Corrections employee Zachary Thomas Bailey, assaulted the woman twice after using his authority to force his way into her home. In the first encounter, she accused Bailey of blocking her in her bedroom and touching her genitals. In the second, the woman says he raped her.

"The victim said she recorded the [second] incident on her phone not only so police would believe her, but so Bailey would not be able to write a false parole violation against her for reporting the rape," WSVN reported.

"This is someone who is hired to protect you, hired to say, 'Hey, protect the society,' and you don't expect your probation officer to be acting in this manner," Coral Springs Police Lt. Joe McCue told WSVN. "The victim said, 'This is rape. This is rape. I don't want you to do this.' Unfortunately, she was in fear that if she reported this, he would violate her probation and put her back in jail."

According to records examined by the Sun Sentinel, Bailey has no prior arrests and had at least four prior recognitions in 1997, 1999 and 2002, including two for "'outstanding efforts' regarding contact standards."

The background: At some point in their lives, many Americans will likely find themselves caught up in the United States' massive community supervision system, which has grown at an explosive rate alongside its prisons.

Unlike probation, which is a conditional alternative to jail time, parole typically involves an early release followed by close monitoring of the convict's behavior outside the correctional system.

A 2008 study conducted by the Bureau of Justice Statistics estimated that approximately 5.1 million Americans are on some form of community supervision (probation or parole), comprising about 1 out of every 45 adults in the United States. In 2013, that number still stood at more than 4.76 million.

Why you should care: Despite the hundreds of thousands of adults on probation or parole and the associated power it gives parole officers over their daily lives, there's little evidence the system actually works.

One brief prepared by the Urban Institute found that parole supervision has "little effect on the re-arrest rates of released prisoners," while in many cases probation simply acts as a feeder system for America's prison population.

According to Allen J. Beck, chief of the Corrections Statistics Program at BJS, just over half of all the nation's prisoners are serving time for some kind of failure of community supervision, 34% for probation violations and 13% for parole violations. Some states have wasted billions on such programs.

Part of the reason Bailey's alleged victim might have felt powerless is that community sentencing systems can often be "arbitrary and capricious," as the New York Times writes, with hefty punishments handed down on an unpredictable basis and sometimes with little more than the word of the officer responsible for the case. According to the Guardian, most analysts agree that only about half of parolees and probationers sent to jail committed a new crime. The rest committed a technical violation of their probation terms.

In Wisconsin, an investigation by the Milwaukee Journal Sentinel found nearly half of the 8,000 people sent to the state's prisons in 2013 were locked up for breaking rules, sometimes for things as minor as "accepting a job without permission, using a cellphone or computer without authorization or leaving their home county."

"The process that forces violators back behind bars relies largely on the judgment of individual parole agents, which can vary widely," the Journal Sentinel writes. "Once accused of violations, people on parole can be sent back to prison for years without proof beyond a reasonable doubt — and they are left with little chance of a successful appeal."

Such situations are all too common across the United States, where your chances of running into someone on probation or parole approach 1 in 51. Small wonder that someone confronted with the power of a parole officer might feel defenseless.