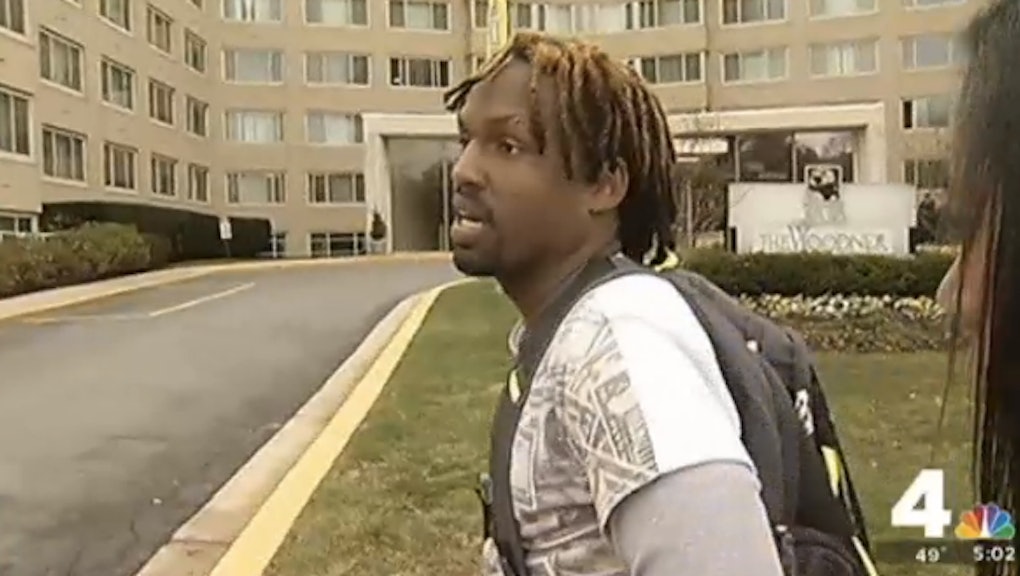 This Homeless Man Sought a Place to Sleep, and Instead Stopped a Rape

On March 27, while he was in search of a place to sleep that night, Ketrell Ferguson of Washington, D.C., overheard what he thought was a robbery, NBC Washington reported.

Instead, he came across a man attempting to rape a woman behind a bus stop. Ferguson immediately launched into action, picking up a nearby stick.

"I smacked him with the stick as hard as I could," he told NBC. His quick thinking not only prevented the rape, but also resulted in the police finding the suspect, identified by a large wound to the head, about an hour later. Police charged the man with assault and intent to commit first-degree sexual assault.

Ferguson, who recently became homeless, said he was inspired to act because some of his own relatives had been raped. "Even though I'm going through hard times, God put in me in a place where I could help," he told NBC. "I was at the right place at right time."

His actions serve as a prime example of the importance of bystander intervention, which the New York State Department of Health defines as "the act of feeling empowered and equipped with the knowledge and skills to effectively assist in the prevention of sexual violence." While in an ideal society, potential rapists choosing not to rape would prevent sexual assault, many activists note that it's crucial in the meantime for us to work together to prevent assault when we witness it.

Ferguson also complicates the stereotypical narrative about homeless individuals as self-centered or the creators of their own circumstances. His courage and selflessness force us to not only acknowledge the variety of complex reasons that lead to homelessness that may be beyond an individuals' control, but realize that homeless people are just that — people.

Let's hope that Ferguson leads by example, and encourages us all, no matter who we are or where we are in life, to do the right thing when given the opportunity.