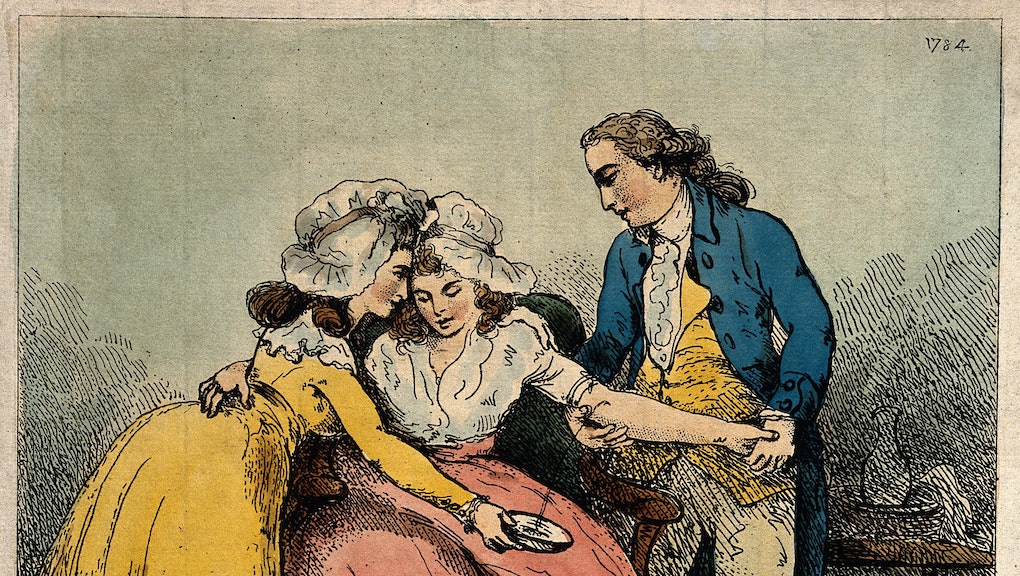 What 6 Ridiculous Old-Timey Diseases All Have In Common

Last week Vox brought to light a silly-sounding disease that seemed to plague women on the go in the late 1800s: bicycle face, or the threat of a permanent distressed expression caused by riding a bicycle. Just as your grandmother would tease, doctors warned women their faces just may stay like that if they kept hopping on a bike and physically exerting themselves.

Of course, the diagnosis only lasted a couple of years in the 1890s. But "bicycle face" was one of many baseless or oversimplified diagnoses women have been given throughout history by a medical field dominated by men. As weird as they may be, these "diseases" were often used to keep women in their place.

One of the silliest "medical" ailments women have been warned about was bicycle face. With the proliferation of the bicycle, women were cautioned that the awkward faces people make while attempting to ride a bike would make them ugly. Perhaps that was because, in addition to just being all-around good methods of transportation, bicycles were tools of feminism that made women mobile for longer distances without the reliance on a man. As Vox points out, suffragettes were early adopters of the bicycle, and its use pushed dress reform, as it was nearly impossible to wear restrictive corsets and bustles while pushing a bicycle.

The backlash from male doctors led to a laundry list of health problems female riders would surely experience: headaches, depression, exhaustion, insomnia, heart palpitations and, of course, bicycle face. Fortunately, the theories largely disappeared a few years after the adaptation of the bicycle, once no one was truly able to be diagnosed with having an ugly face due to riding a bike.

During the times of the ancient Greeks, many women had to watch out for the mystery of the traveling uterus. Even Hippocrates, the father of modern medicine, shared his concerns with what early physician Aretaeus of Cappadocia described as "an animal within an animal" that rattled around a woman's body and supposedly affected her moods and health, according to Wired.

One of the prescriptions for wandering womb was frequent pregnancy, since the "animal" (womb) was "moving" out of sheer boredom. A Byzantine physician proposed shouting at a woman or making her sneeze to keep the womb in place, Wired reports. By the 17th century, "experts" believed a wandering womb could be lured back into position with pleasant smells applied to a woman's genitals. Eventually this ailment seemed archaic to medical practitioners, but hysteria, which evolved from the theory of the wandering womb, didn't.

Incidentally, this was largely a disease for women of a certain class. White women who suffered the type of hysteria that we would now classify as prolapsed uterus or diseased ovaries, were seen as endangering the race through their low fertility, Laura Briggs wrote in American Quarterly.

The first lobotomy was performed on a Kansas housewife in 1936. The psychiatrist who prescribed the operation, Walter Freeman, reportedly believed that "an overload of emotions led to mental illness," and that the only cure was cutting certain nerves in the brain to stabilize a person's mental health; and often, lobotomy patients were women whose "emotions" needed to be checked.

A British woman, Eileen Davie, experienced postpartum depression after the birth of her second child in 1946. In a 1976 BBC documentary, her husband Sid (who was required to sign the consent forms for his wife's procedure, by the way), said he was told the procedure would be no more serious than "having a tooth extracted." However, his wife was "irreversibly damaged," he said.

Freeman performed thousands of surgeries before being banned from operating. As many as 50,000 estimated lobotomies were performed in the United States by the early 1950s (even though some countries like Germany and Japan outlawed the practice). Meanwhile, Sweden also largely adopted the procedure and 63% of these operations were performed on women, according to a report in the Journal of the History of the Neurosciences: Basic and Clinical Perspectives. Even modernist painter Sigrid Hjertén, who studied under Henri Matisse and is one of the leading artists credited with bringing modernism to Sweden, died after a botched lobotomy to treat her mental illness in 1948.

"The vapors" are understood these days as something that require a Victorian fainting couch, but when the term was coined, it could have meant anything from PMS to clinical depression. It may have also meant hypochondria, but generally, we would understand "the vapors" as anxiety.

According to the late New York Times language columnist William Safire, "the vapors" were described as "a disease of nervous disability in which strange images seem to float hazily before the eyes, or appear as if real." During the Victorian period, well into the 1920s, women were especially seen as weak. In fact, this was a common "ailment" among suffragettes, with the prescription being rest and sometimes, smelling salts.

By 1872 in England and Wales, women made up the majority of "certified lunatics" (which was the medical term back then) confined to asylums, according to Elaine Showalter, author of The Female Malady. "In a society that not only perceived women as childlike, irrational and sexually unstable, but also rendered them legally powerless and economically marginal, it is not surprising that "doctors were quick to diagnose women as so-called lunatics, Showalter wrote, according to the New York Times.

The Guardian's Gary Nunn traces the origin of the term "lunacy" from "a monthly periodic insanity, believed to be triggered by the moon's cycle." So, maybe you can guess where that term came from.

Most of these maladies seem ridiculous now because modern science has told us so. However, the fight over women's bodies, voices and minds have continued to be waged, in part, by men. With an anti-abortion bill in Arizona that would require doctors to tell women that drug-induced abortions can be reversed, to a Supreme Court ruling that restricts a woman right to choose based on her employer's religious freedoms, there's no doubt that women are still being limited through medicine.