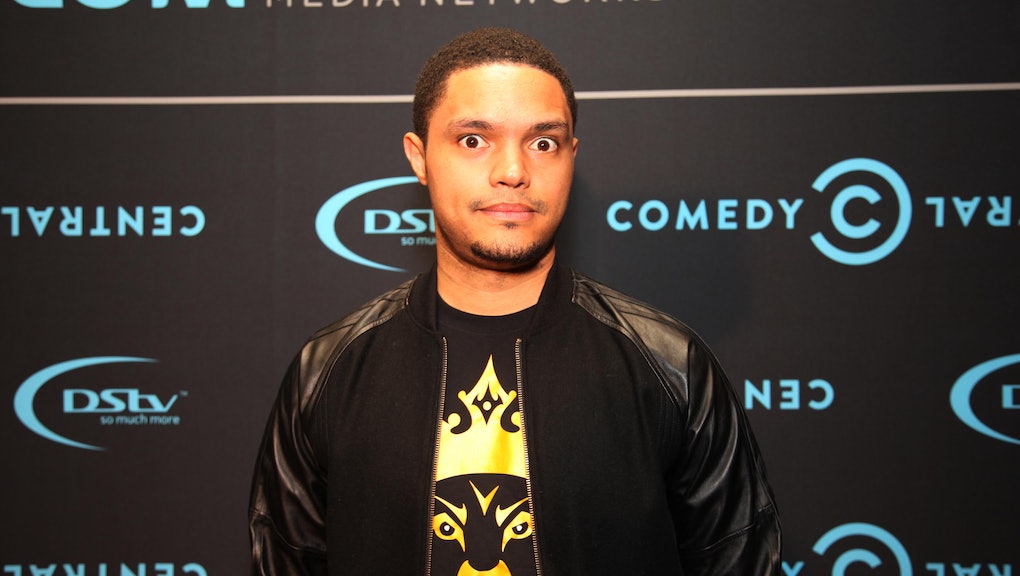 In an outrage cycle, the patterns of behavior are predictable. First, news: 31-year-old Trevor Noah is the new host of The Daily Show. Next, discovery: Who is Trevor Noah? Crescendo: The Internet finds something to get mad at Trevor Noah about. In this case, it took less than 24 hours for the cycle to take hold — and it will in all probably take even less to die out.

As compiled by BuzzFeed, Noah tweeted some jokes over the past four years that are being called offensive by some and being defended as comedy by others. The groups in the jokes' crosshairs center on women and Jewish people. Yet amidst the outrage, those upset by the comments might be missing the forest for the trees.

The jokes themselves are notable first for their age — most are from several years ago — and for how unfunny they are. Their lack of quality doesn't come from targeting the wrong groups, though; they're just bad jokes. This is the man who will be hosting The Daily Show later this year, and he's sent some pretty stupid zingers out over the past few years. He's probably gotten funnier since, right?

Unfortunately, not every joke is that old. There are a couple that are mildly less offensive, albeit still pretty devoid of humor, from last year.

Now, as Mic highlighted yesterday, Noah has a strong body of stand-up work to his credit. He shouldn't be judged off of just a few tweets. He's funny, and the promise he showed in his previous Daily Show  appearances still stands.

But what of the offensive material in the humor? Should he now be held to a higher standard? Yes, quite possibly, though it's doubtful there's a higher standard than "relative newcomer taking over The Daily Show" anyway. The scrutiny was always going to be insane, and Noah knew that already.

"We live in a world where some people still say Beyoncé can't sing," Noah told the New York Times yesterday upon the announcement he'd be taking over. "Clearly I'm not immune to that."

Should he lose the gig over these tweets? Absolutely not. That's an insane notion, because it presumes Noah is somehow an aberration for having tweets he regrets on his timeline. On Twitter, Brooklyn comedian Joel Kim Booster put it best:

We've all said things we regret. Some of us have even tweeted them. Judging someone for a few old tweets is unfair and doesn't allow the possibility of change and evolution. The Daily Show is a massive platform, and Noah will have to be on his best behavior to live up to expectations. If he hasn't matured yet — though it's hard to believe Comedy Central would hand him their biggest property unless they knew he had — the demands of his new job will get him there quickly.

Until then, let's lean off the outrage cycle for a bit. Give Noah the chance to make or break himself in the promotional cycle leading up to the job, then on the show later this year. Attempting to silence a young, fresh voice because of past mistakes is just as ugly as even his worst tweets.