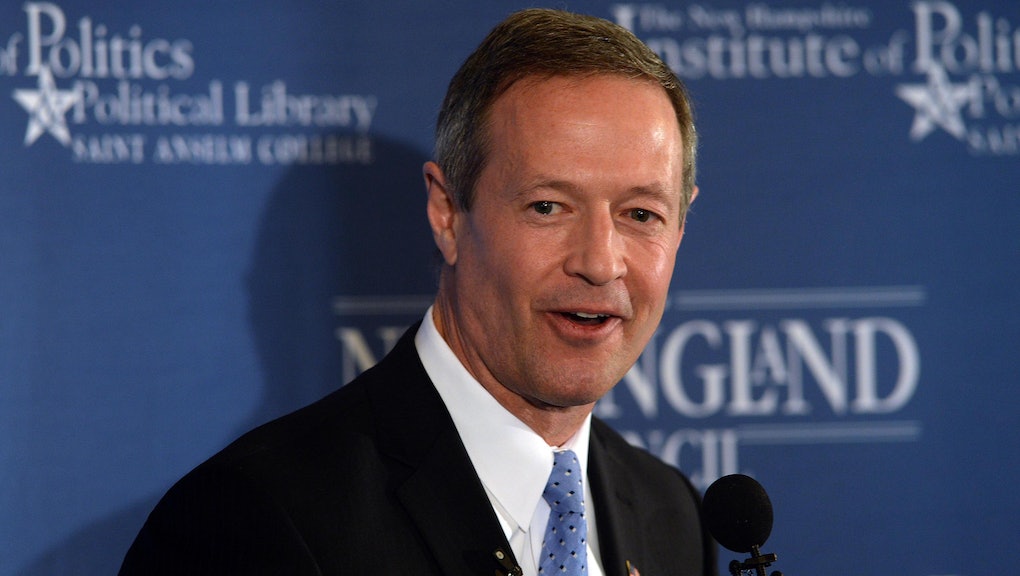 BEDFORD, N.H. — Before former two-term Maryland Gov. Martin O'Malley can launch a meaningful effort to dislodge Hillary Clinton as the overwhelming frontrunner for the 2016 Democratic presidential nomination, he's going to have to deal with Massachusetts Sen. Elizabeth Warren.

O'Malley was taking questions here after delivering a warmly received speech at the "Politics and Eggs" breakfast at the cozy Bedford Village Inn, about 15 miles north of Nashua, when a reporter first remarked that the politician's "economic inequality message sounds a lot like what Sen. Elizabeth Warren talks about." The reporter then asked the former governor if he is "a fan of Elizabeth Warren" and if she was someone he "could get behind if she was to jump in [the race]."

O'Malley didn't flinch. He is either used to the questions or really good at masking his frustration — or maybe a combination of the two.

"I believe that Sen. Warren is certainly speaking with great clarity in the need to regulate Wall Street and to hold the CEOs of banks accountable," O'Malley responded, before pivoting to his own talking points. "The big banks, if they're too big to fail without wrecking our economy, then they're too damn big."

"I'd welcome support from her supporters," he added, no hint of a smile.

Warren really, really isn't running: About an hour earlier on NBC's Today, the actual Sen. Elizabeth Warren — as opposed to the simple idea of her, ever lingering over O'Malley's shoulder — stated no fewer than four times that she would not be running for president in 2016.

"No. I'm not running and I'm not going to run," Warren told co-host Savannah Guthrie after the latter asked "point blank" if she was going to make a bid for the White House.

But O'Malley sure sounds like he is: Tuesday's event marked O'Malley's second visit this month to New Hampshire, home to the nation's first primary. He has made five campaign-style appearances in Iowa and has plans to return there in early April. Iowa's caucuses, scheduled for Feb. 1, 2016, are the official beginning to the primary season, with New Hampshire's more traditional voting scheduled to begin eight days later.

For Democrats, it's time to make peace with the fact that Warren, for all her populist appeal, simply does not want to run for president. At least not in this cycle. O'Malley, meanwhile, remains an unknown quantity to most voters, despite stamping his way around the early states, trying his hardest to get a toehold in the race.

As if to underline this point, O'Malley's team released this 15-second web ad titled "Principles," right as the governor headed out for series of private meetings with local leaders:

"We should stick to our principles," O'Malley says in the ad, much of which takes place in a car speeding along some dark highway, likely somewhere in New Hampshire or Iowa. "Our enduring symbol is not a barbed wire fence, it's the Statue of Liberty. We've got to be a party that stands for the deeper and greater principle of our country."

For now, the governor seems prepared to hold on tight to his own, while also banking on some good humor to provide a quick laugh — like when he was informed by another reporter that, according to a new Franklin Pierce poll, he won just a single percentage point in a head-to-head matchup with Hillary Clinton.

"Polls are snapshots in time," O'Malley said. "There's only one way to go."