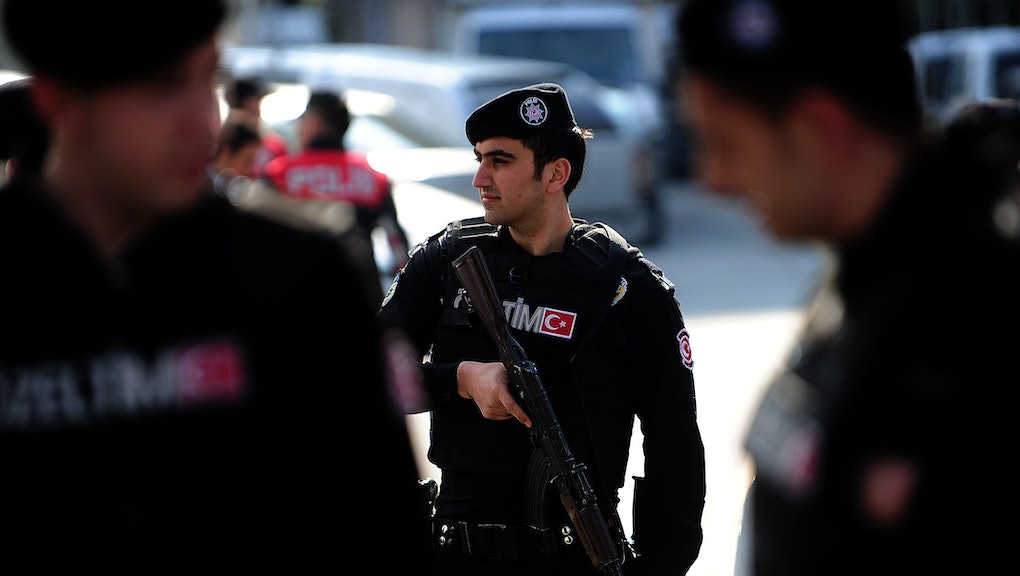 A group of gunmen stormed the Caglayan courthouse in Istanbul where they took hostage the prosecutor, a man who'd been tasked with investigating the death of Berkin Elvan, the 15-year-old boy who was mistakenly killed after being struck by a police tear gas canister during an anti-government protest in Istanbul. Because of a lack of movement on the case, DHKP-C went to drastic measures to get people's attention to bring about action.

By Tuesday evening, "Gunshots and explosions were heard and smoke was visible," reports Reuters. After a rescue attempt, officials released a statement Tuesday evening saying the prosecutor had been seriously injured and the two gunmen had been killed. According to the Associated Press, Kiraz died of his wounds in a hospital later in the day.

The gunmen were part of DHKP-C, regarded as a terrorist organization by the U.S, the EU and Turkey. Before the shootout, the courthouse was evacuated while negotiations between the militants and the police took place.

Elvan's father, for his part, called on the militants to let the prosecutor go. Turkish lawyer and politician Hüseyin Aygün spoke with the boy's father earlier and Tweeted a portion of their conversation.

There's a bigger problem. While this may be thought of as a one-off act of terrorism, Turkey's left-leaning citizens are increasingly frustrated at President Recep Tayyip Erdo?an's ruling Justice and Development Party (AKP), his tightening grip on power, the Islamization of the country and the weakening of the military, concerns over which prompted the nationwide protests in 2013 that killed Elvan.

Since coming into power in 2002, the AKP has been slowing transforming Turkey into a more autocratic government that quickly saw success transforming the country's economy. According to the World Bank, Turkey's GDP growth in 2001 was -5.7%. By 2004, that had turned around to 9.4%, marking a 15.1% swing.

The AKP also saw success with foreign policy, which included making overtures to the West and repairing regional tensions with the Kurds.

However, these changes came with a cost. The New York Review of Books reports that Erdo?an's "stress on moderation, democracy and the rigors of the free market was welcome not only to waverers inside Turkey, but also to the United States and its allies." But at the same time, "A vindictive authoritarianism is taking hold of Turkey ... as much as the tear gas, water cannons and plastic bullets, it was Erdo?an's contemptuous way of addressing the Gezi demonstrators that hardened feelings against him."

Up until now the left's dissatisfaction with the political landscape has been more subdued, but this hostage situation has brought tensions to a new level. If the incongruent forces of Islamists and liberals are not resolved, civil unrest in Turkey is likely to augment.