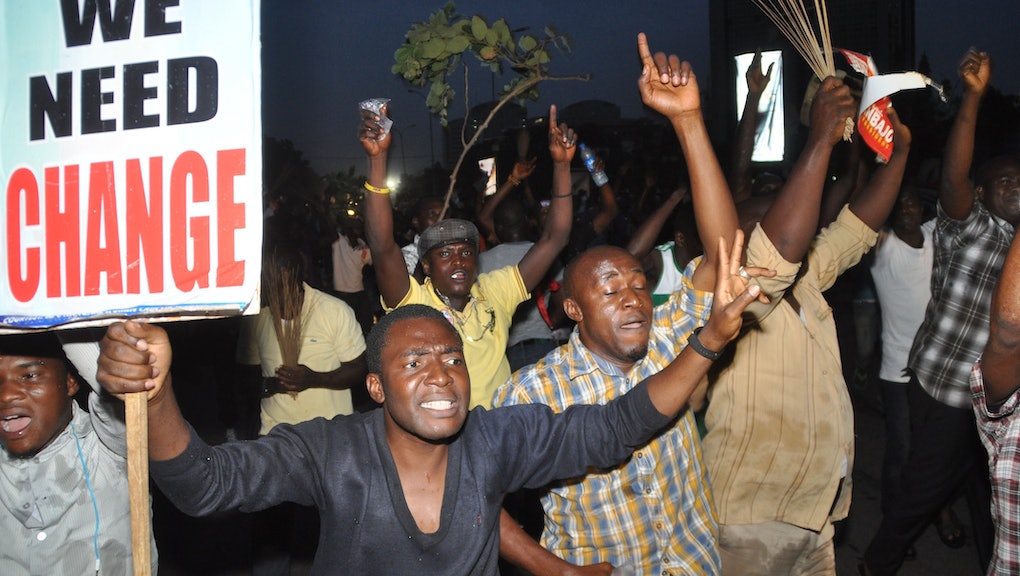 Nigeria's president Goodluck Jonathan conceded defeated Tuesday after a historic election that had been dogged by terrorist violence, Reuters reports. Jonathan and his People's Democratic Party were ousted by challenger Muhammadu Buhari and the All Progressive Congress. It was the first time a sitting Nigerian president has failed at the polls, and if the transition proceeds peacefully, it would cap a milestone in the nation's democratic development.

"I am excited, very excited [...] not because of the outcome of the election, but the process." Jeff Ebinama, a member of the Nigerian Friendship Association, told Mic. "We are making significant steps to improve our political system."

APC spokesman Lai Mohammed was was quoted in Al Jazeera saying that "President Jonathan called General Muhammadu Buhari, the winner of the elections, to congratulate him."

How we got here: As Mic previously reported, the Nigerian election proceeded only after a roller-coaster of fits and starts.

The election, originally scheduled for Feb. 14, had to be pushed back to last weekend while the government took efforts to protect voters from threats of violence by the terrorist group Boko Haram. The group had vowed to disrupt the election and even with heightened security, their gunmen mowed down dozens of voters simply for going to the polls.

The election was also mired in technical problems, and voting machine malfunctions lead authorities to extend voting into Sunday.

Buhari, who briefly served as dictator of the country in the 1980s, has nevertheless stood for and peacefully lost two previous democratic elections. Now that he's finally won, Ebinama says Buhari will have his hand's full tackling Nigeria's problems.

The issues. "The number one [issue] is they have to deal with corruption," Ebinama told Mic. "The civil service in Nigeria is dysfunctional ... Everyone talks about having electricity; I don't think its possible to deal with that until corruption is dealt with."

Africa's most populous nation, Nigeria has suffered from electrical shortages for decades; as of 2013, over half of the population went without power. There is also significant room for improvement on the corruption front. The country ranked 136 of 175 on the 2014 corruption perception index.

Unemployment has also bedeviled the nation in recent years, spiking considerably during Jonathan's five years as president and three as vice president. Today the unemployment rate is well over 20%.

As it does in many countries, that burden has disproportionately fallen on Nigeria's young people and in areas that were already struggling. According to a Brookings Institute study, most youth unemployment was focused in Nigeria's rural areas, where more than half of the youth population has been unemployed in recent years. More troubling still is that youth unemployment has also fallen disproportionately on women. And at least one study found that persistently high youth unemployment has "contributed immensely" to youth involvement in criminal activity.

Institutions, while they are not very sexy or attention-grabbing, do play an outsize role in the success or failure of nations. George Washington's voluntary retirement after two terms as president of the United States set an unwritten rule that hung around until Franklin Roosevelt's controversial third term in 1940.

With Nigeria's successful election and impending peaceful power transition, the African continent took a big step toward a similar milestone. Going forward, every successful election will strengthen and institutionalize the process, and, with any luck, will open a new chapter of development for the Nigerian people.

"I have to be hopeful," Ebinama said. "It's not going to happen overnight."