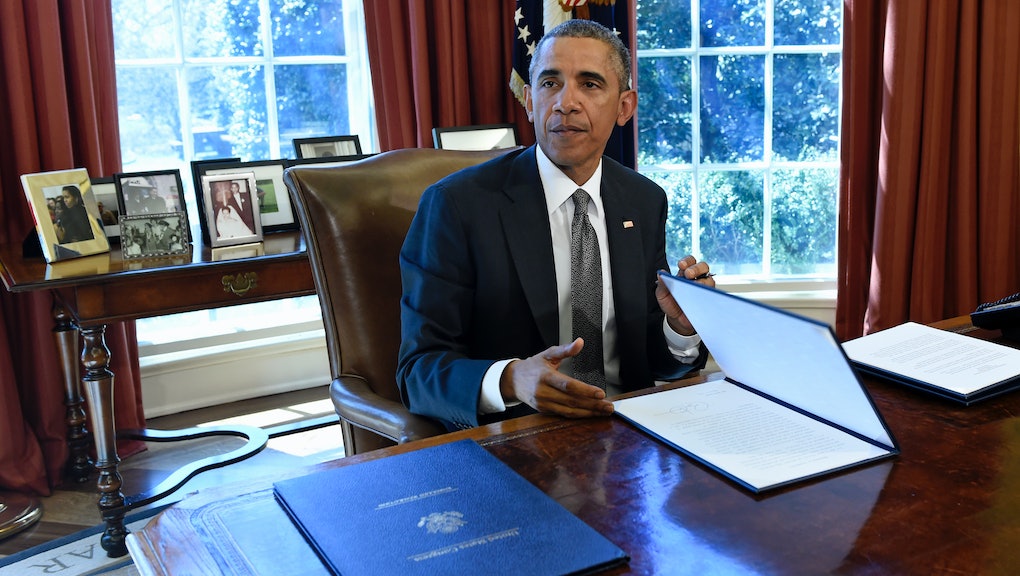 On Tuesday, President Barack Obama commuted the sentences of 22 inmates serving time for drug crimes committed at least a decade ago. The move more than doubled the number of commutations the president has handed down to inmates in the federal prison system, the Huffington Post reports.

The 22 individuals will be released effective July 28. The White House press secretary's office confirmed to Mic that 17 of them had been sentenced for crimes related to the production or distribution of cocaine — in particular "cocaine base," better known to the public as crack cocaine.

Others were sentenced for involvement in the trade of methamphetamines, marijuana or heroin. Most sentences were for decades or more, and all were convicted for nonviolent offenses.

There's no reason these people still needed to be in jail. The Obama administration described the commutations, which differ from pardons in that the offense will remain on the individuals' criminal records, as necessary to correct an "outdated sentencing regime" that unfairly targeted those accused of participation in the crack cocaine.

"Had they been sentenced under current laws and policies, many of these individuals would have already served their time and paid their debt to society," White House counsel Neil Eggleston said in a statement posted to the administration's website. "Because many were convicted under an outdated sentencing regime, they served years — in some cases more than a decade — longer than individuals convicted today of the same crime."

Eggleston added that mandatory minimum sentences have lead to uneven sentencing, with some non-violent drug offenders serving more time than violent ones. He also pointed out that the White House had already rectified some of the problem in 2010, when Obama signed the Fair Sentencing Act eliminating disparities in sentencing guidelines for crack and powder cocaine that disproportionately hit poor, minority citizens.

As Alternet's Phillip Smith notes, most of the offenders were sentenced under severe drug laws passed during the 1980s that the Obama administration has since worked to roll back. In 2013, Attorney General Eric Holder said the Justice Department would no longer pursue charges that "impose draconian mandatory minimum sentences" for drug crimes committed by people who were not affiliated with violent, large-scale narcotics operations or gangs.

Tuesday's announcement appears to be a partial fulfillment of Obama's stated commitment to freeing some prisoners in the war on drugs who seem to have already served enough time in prison.

The inmates now have a second chance at life: Each of the 22 inmates will receive a copy of this signed letter from the White House, in which the president explains that the commutations are intended to give them another opportunity to put their lives on the right path despite "many who doubt people with criminal records can change":

"I believe in your ability to prove the doubters wrong," Obama ended the letter. "So good luck, and Godspeed."

That's the kind of spirit that every American can get behind.