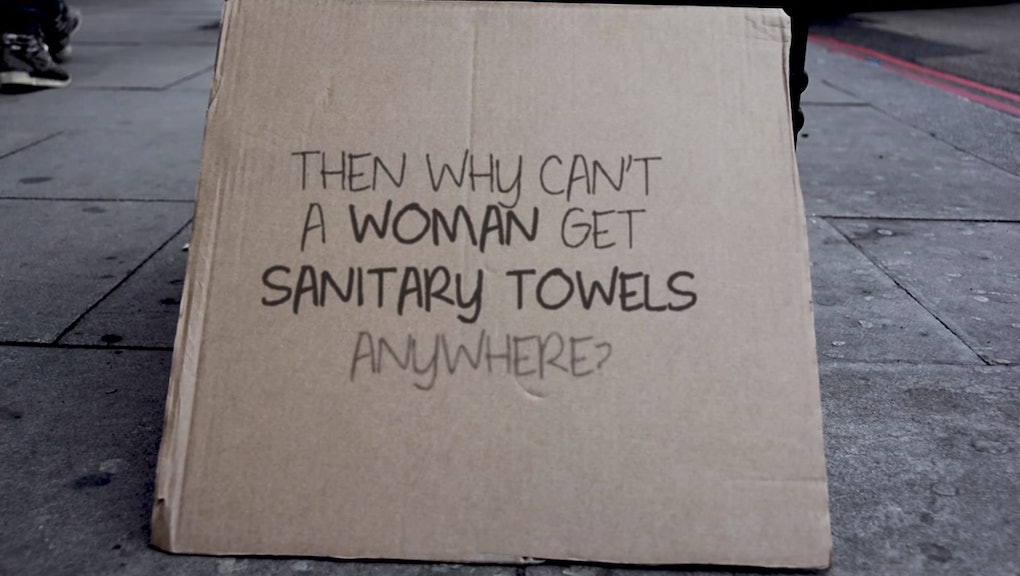 One Powerful Hashtag Exposes a Unique Problem for Homeless Women

Periods are costly, between the pads, the tampons, the pain pills. Using the average that women bleed monthly for 40 years of their life, at a conservative average of $8 per month on tampons, for example, women spend an estimated $3,840 on tampons alone over their lifetime. That's not including pads or pain pills — or anything else, for that matter. But what about homeless women, who lack easy access to the most basic hygienic products?

A new campaign in the U.K., #TheHomelessPeriod, shines a light on homeless women who need assistance caring for their menstrual cycles. According to the Guardian, approximately 26% of people in the U.K. who receive "homelessness services" are female. But in most shelters, "sanitary ware or any kind of period ephemera is scarce," Vice reported earlier this year.

In addition to seeking shelter on a nightly basis, these women also have to find ways to tend to their bodies while on their period. "Homeless women move from one unsafe, unpredictable situation to another and are likely to just have to deal with cramps and discomfort while on the move," Vice's Maya Oppenheim writes. "They may never feel clean. And even if they do have a supply of tampons or towels, irregular access to toilets can make it difficult to change them regularly — something that could, potentially, lead to infections like toxic shock syndrome."

This is where #TheHomelessPeriod campaign comes in. Three U.K. advertising interns — Sara Bakhaty, who was spurred into action after reading the Vice article, along with Oli Frost and Josie Shedden — launched a Change.Org petition that has garnered nearly 6,000 signatures in one week. The campaign demands that the government "give homeless shelters an allowance to buy sanitary care [items], the same way they do for condoms," which are readily accessible at no cost at most homeless shelters in the U.K.

"The Homeless Period was an initiative that was borne from the idea of finding 'a creative solution to a social issue,' and we were inspired to make the [YouTube video] and petition, as it is a subject that most have not given consideration to before," Bakhaty told Mic in an email.

The double standard: Women bleed on a regular basis, but in the U.K., sanitary products are classified as "luxury" goods. This campaign takes the government to task for applying a 5% tax rate on these items. Yet in homeless shelters in the U.K., men's items, like condoms and razors, are usually provided for free and in abundance. "Expecting women to simply fit into homelessness services which have been designed for homeless men is not good enough," St. Mungo's Broadway, a U.K. homelessness charity, wrote in a 2014 study.

#TheHomelessPeriod campaign reflects the increasing efforts to bring visibility to what is, for most women, a normal part of their lives. It normalizes women's lives as human lives — equal to those of men.